Travel to Russia by Train

With the RZD Night Trains

Have you ever thought of going to Russia by train? It may sound a bit crazy but it is actually quite simple and a very comfortable experience. Back in April we had the chance of travelling from Paris to Moscow and back by train. Read more about our trip to Russia here. Russian Railways RZD have invested a lot in rolling stock during the last years and nowadays offer very comfortable sleeping cars on their trains to Europe.

Important notice: Since autumn 2016 there have been reports about problems at the border between Belarus and Russia. It seems that the border between the two states now is open only for citizens of these countries only, as there is no international border check point at this border. Citizens from other countries have to use an international border check point to enter Russia, such as one of the Moscow airports or at the borders between Finland, Estonia and Latvia to Russia. Latest information (from March 2017) from the Russian Ministry of Transport suggests that the train route through Belarus is exempt from the new regulations. Passengers can use the trains from Europe through Belarus to Russia without problems, as long as they have the required visas for both countries.

Russian Railways RZD currently operate six night trains from Central and Western Europe to Moscow. All of them consist of modern and comfortable sleeping cars. The "star trains" undoubtedly are the "Transeuropean Express" from Paris to Moscow and the "Nice Moscow Express" from Nice on the Cote d'Azur to Moscow. Other cities with direct trains to Russia's capital are Vienna, Prague, Berlin and Warsaw. 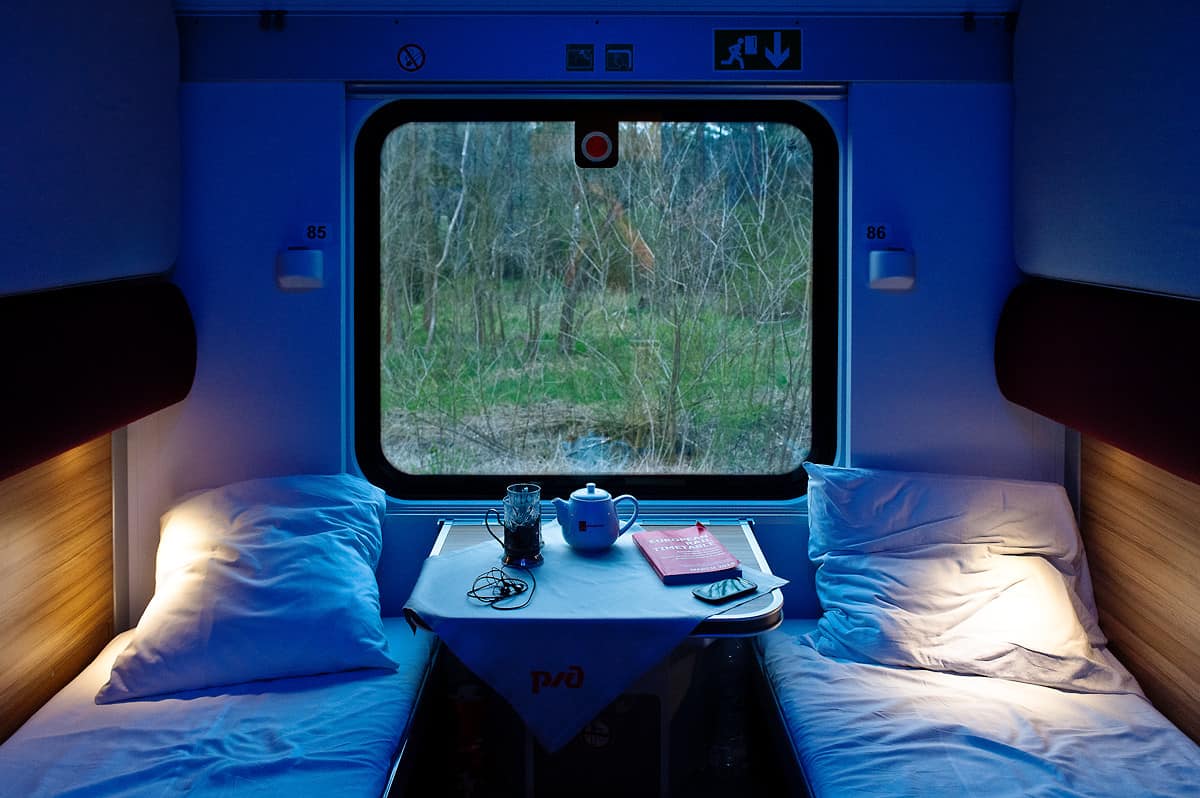 A comfortable and spacious two bed (1st class) compartment on the Paris to Moscow night train.

Additionally there are through coaches operated from Prague and Vienna to Saint Petersburg. Latvian Railways LDZ also runs a night train from Riga to Moscow. Helsinki is connected to Moscow with the "Lev Tolstoi" night train and there are also several night trains running from Kaliningrad via Vilnius to Moscow. However I will focus on the trains from central and western Europe in this blog.

Types of trains and available accommodation

The night train from Berlin to Paris is operated with a new Talgo trainset. It has the ability to change from European normal to Russian broad gauge during the trip. This allows for faster journey times compared to regular loco-hauled coaches. The Talgo trainns offer reclining seats, comfortable 4-bed and 2-bed compartments as well as 2-bed deluxe compartments with en-suite shower and WC. A restaurant car is available during the whole journey.

All other trains offer regular, modern sleeping cars with four beds per compartment. These can be booked as 4-bed or 2-bed compartment, meaning that up to four people can sleep in one compartment. As a single traveller you can book a single bed in a shared 4-bed or 2-bed compartment. If you want more privacy you can also book the whole compartment on your own. The sleeping cars are currently the most modern types running in Europe offering superior comfort. This includes air-condition, shower and a key-card system to lock your compartment door. There is a conductor in each carriage selling snacks and drinks. The trains from Paris and Nice to Moscow also convey a restaurant car from Nice to Warsaw and from Brest to Moscow.

In addition to the regular sleeping cars the night trains from Paris and Nice also convey Deluxe sleepers with just four compartments with two beds and en-suite shower and toilet. If you are looking for the maximum of comfort and a unique travelling experience, these should be your choice! At one end of each coach you will also find a small lounge and bar area where you can sit and relax during the day.

Timetables of the trains from/to Russia

Via the following links you find all timetables of the trains from/to Russia.

Tickets can be bought online from Russiantrain (easy to use), Infotrain or at RZD Russian Railways.

Of course you can also buy tickets locally from train stations. At stations, a number of discounts is available for small groups of up to five people as well as larger groups of six people and more, for seniors, youths and families. Special discounts are available if you travel around your birthday and for newlyweds. The price depends on the type of accomodation you book and your travel date. A full fare ticket from Vienna to Moscow in 2nd class (4 bed compartment) ranges around 150€. In 1st class (2 bed compartment) it is about 240€.

All night trains cross Belarus on their way to Russia. This means that you will need a visa for Russia as well as a transit visa for Belarus. The most convenient way to obtain your visa is through a specialised agency. They deal with everything and you receive your passport with both visa without much hassle. Of course this costs extra compared to going to the consulates on your own but you save a lot of time (and money if you would need to travel to a city with a consulate). Calculate with enough time to apply for the visa (about two weeks at least unless you want to pay premium for express visa).

It is of course also possible to use the night trains of RZD only on parts of their route. For instance, the Transeuropean Express has perfect timings for an overnight trip from Paris to Berlin. Or use the Nice Moscow Express to comfortably travel from Nice to Vienna. Tickets for such trips are of course also available at a station or online.