From Russia with snow

The train called Allegro is the best way to get from a former Russian capital to the current capital of Finland. There are two reasons to choose this mean of transportation. First, this high-speed train is the fastest one on the route (the whole trip takes about 3.5 hours). At the same time, it offers quite affordable tickets from Saint Petersburg to Helsinki (starting from around 70 Euro).

Allegro departs from Finlyandskiy Railway Station. Its name — rather tricky to read and pronounce — is a transliteration of the Russian word which means Finnish. So, the title suggests what is the main destination you can reach from here. The good thing is that there is a simplified English version of the name — Finland Station — however, I have never met this modification in real-life usage.

The main building of the station is a good example of functionalism. Its orderly clock tower with a thin spire is impressive. And the decorative elements are entertaining.

Now, to the important and fairly unexpected part: you don’t need to enter the main building to get to the Allegro train. The checking-in happens at the separate facility called International Hall “Express”. That calls for a short walk: to the left from the main entrance, along cafes and shops, towards Botkinskaya Street. This quest could be hard, but we’ve got some leads. Follow the red arrows, Neo!

That’s how this path of necessary walking looks on a map: 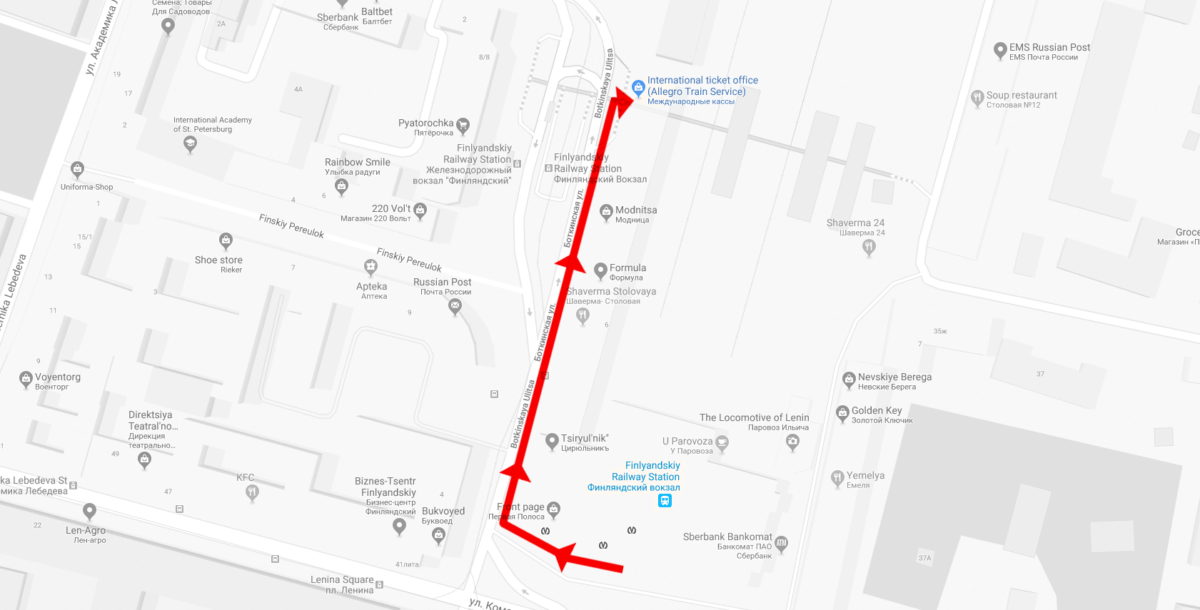 And this is the building we are looking for: 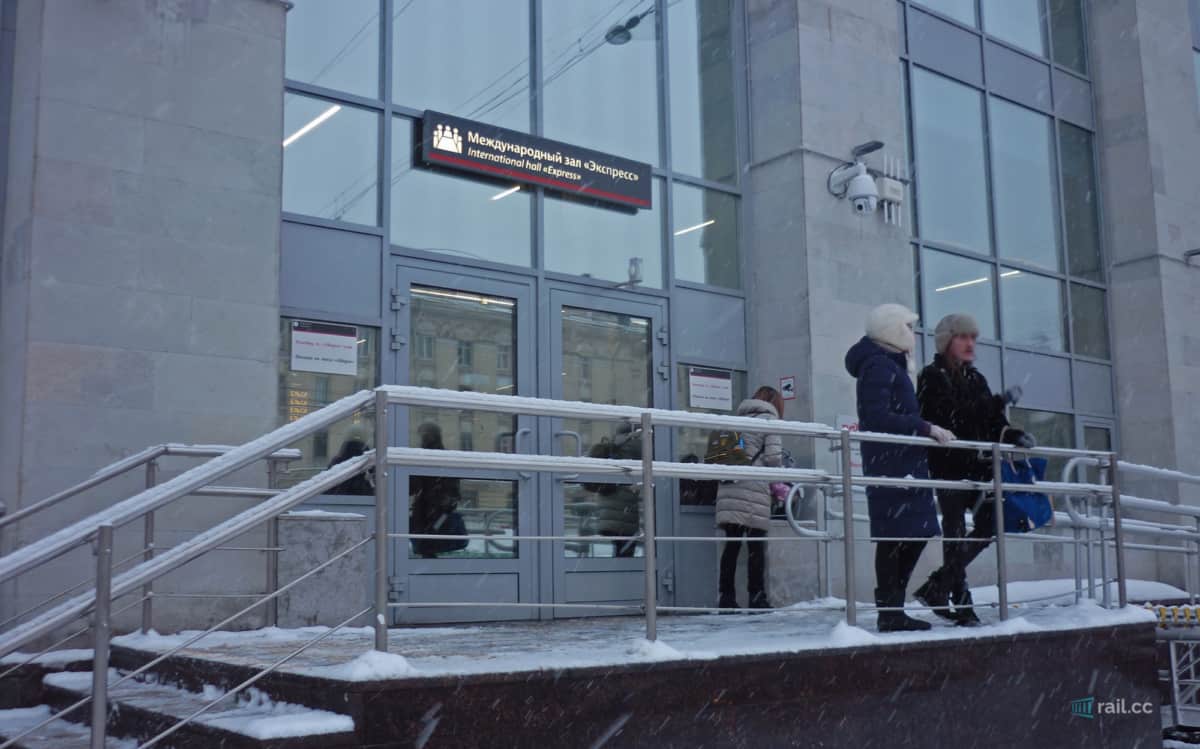 The international departure hall meets passengers with luggage control. The frames of metal detectors and lines of introscopes, installed at the entrance, are usual in Russian railway stations and airports. Security theater has become a common practice here for quite a long time, so don’t let it bother you. Just keep in mind that this control could consume some extra minutes, because usually it is not to be without waiting lines. 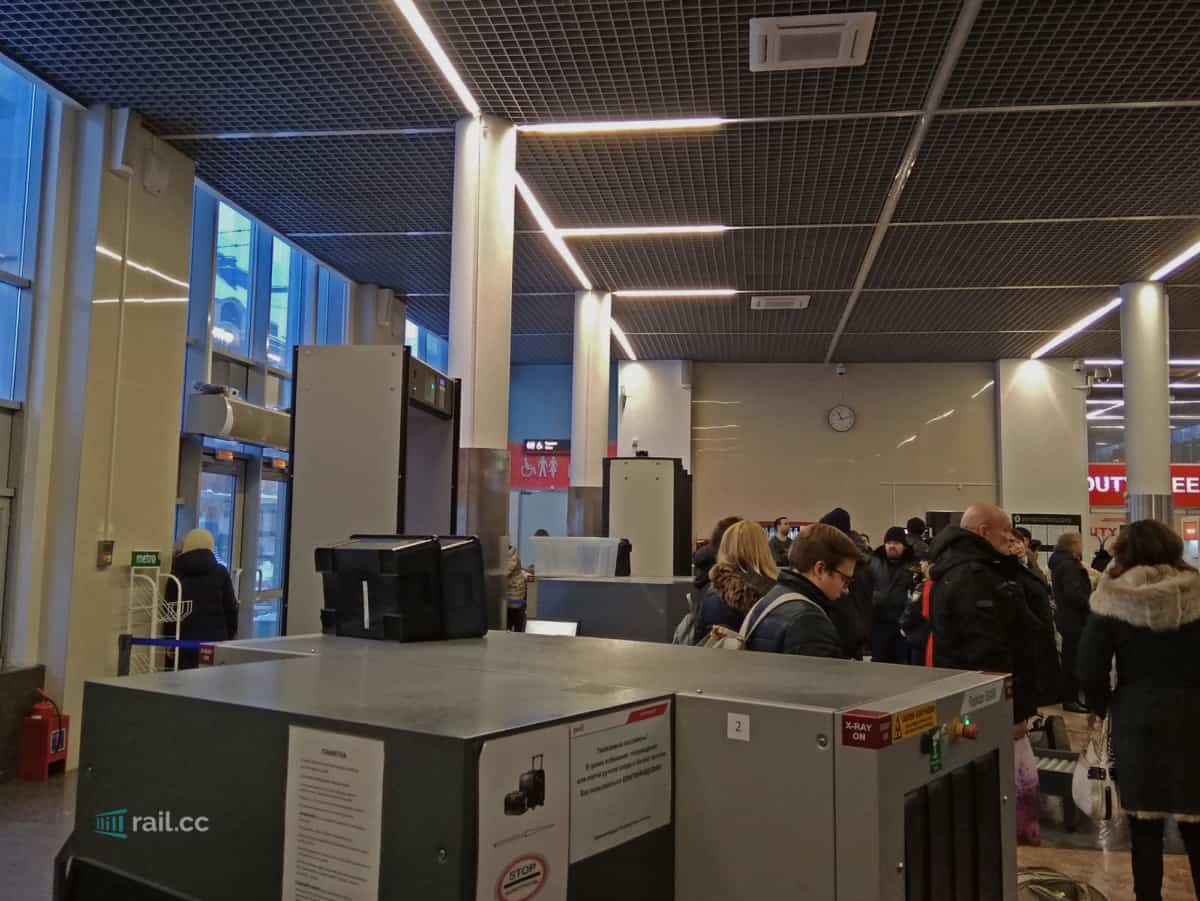 The place is divided into two distinctive parts. The first of them contains a modest number of chairs and a tiny cafe. The second part also has some sitting places and a duty free shop. The separating line here is the passport control, which goes in an unhurried and gentle manner. While waiting for your documents to be checked, if lucky, you can find some entertainment in an occasional glitch art, provided by on-site informational display.

The back wall of the hall is a mirror, but as it turns out, there is something behind it. Thanks to a kind border officer - he tells me that the space hides an additional waiting room. It is closer to a platform, and you can find there some chairs and a charging station for your devices.

The departure of my train is delayed due to technical difficulties. Probably, a heavy snowfall is to blame for this. People say that this kind of delays happens from time to time during the winter season. Anyhow, after some time Allegro appears on a track, and the journey is about to begin.

I take my seat and have a couple of minutes to say goodbye to snowy and windy Saint Petersburg. Pretty soon I will be saying hello to Helsinki, also snowy and even more windy. Station loudspeakers make an announcement you do not hear often: “The train will depart as soon as ready”. 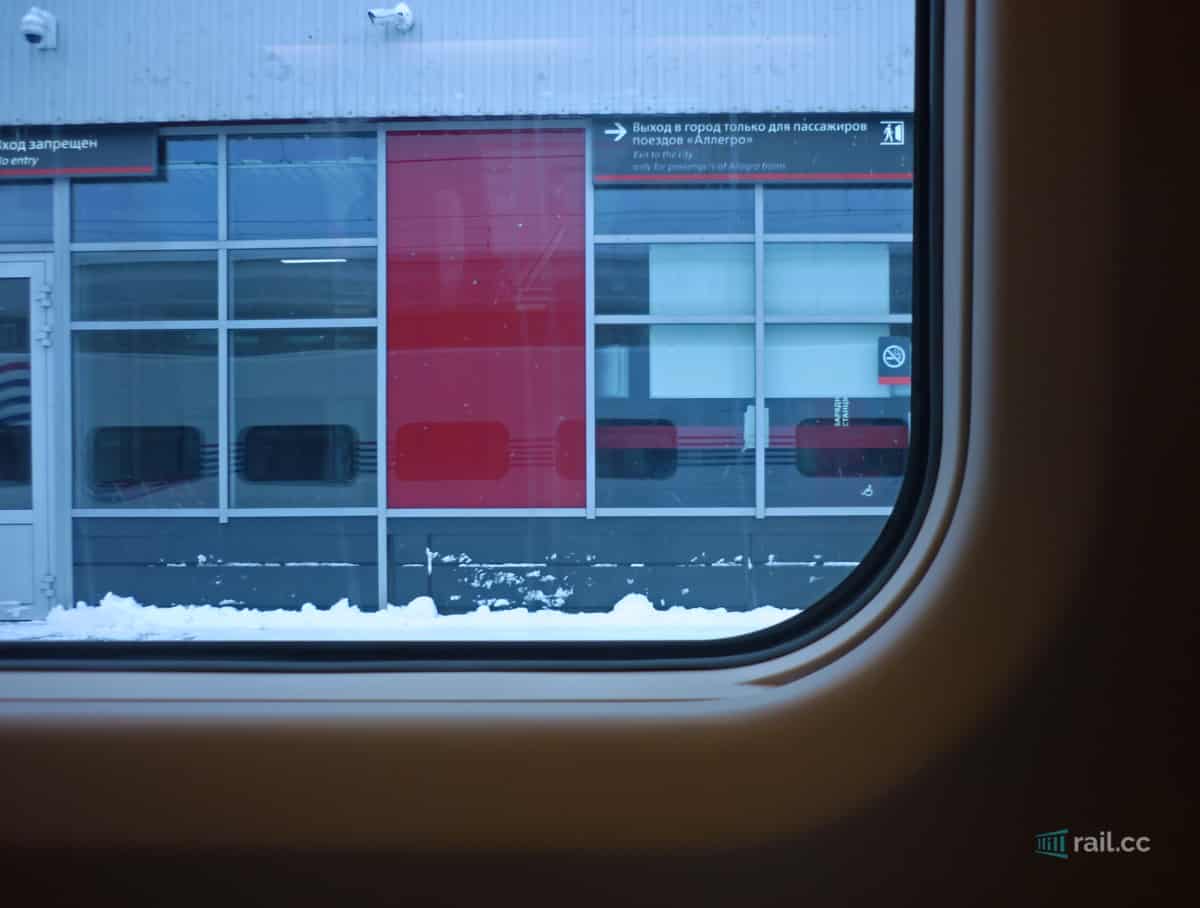 Departure of the Allegro train from Saint Petersburg

Allegro has seven cars. One of them is a first-class car (more free space, leather seats), one is a restaurant car (with tables). The rest of the cars represent the second class (also called the economy class) — they are the same, except for an element of specialization. The car number six allows to travel with pets. The seventh car is kids-friendly. I wonder how people who travel with both kids and pets manage their ambiguous situation. Anyway, I ride the regular second-class car, and that’s how it looks like: 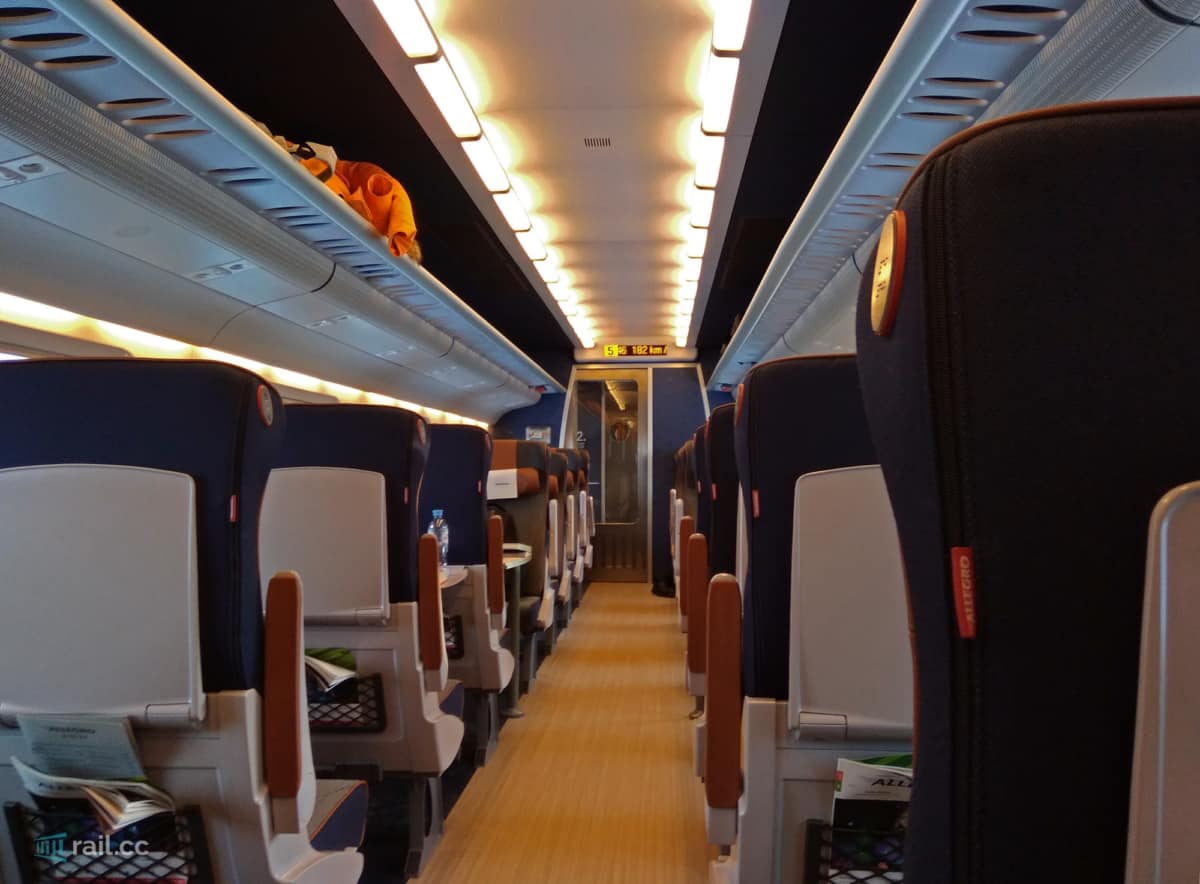 There is a coat rack in the middle of the car. At the end of the passage you have a water cooler, a luggage space and a toilet.

Each row has four seats (two on the left side, two on the right). The chairs are comfortable and obviously made with a thought about tall people. Each passenger has a socket, a coat hook and an option to turn on an additional personal light. There are also a tray table, a pocket with a fresh issue of “Allegro” magazine , and a foothold. Apart from everything else a set of branded plastic bags is offered — most likely, for an occasion if you start missing your local supermarket.

A rolling window blind could be helpful in training social skills. It is designed in a way which affects the view for two seating rows at once (that means four passengers, if the train is full). However, it also works perfectly for the intended purpose — saving one’s eyes from the bright sun.

In addition to all physical objects and accessories which make your trip comfortable, Allegro has free Wi-Fi. It demands one-time authorization via browser (you have to enter the number of your seat and the last four digits from a passport number) and works like a charm. The internet connection is fast. As well as the train itself — and from time to time it likes to remind you exactly how fast it is. 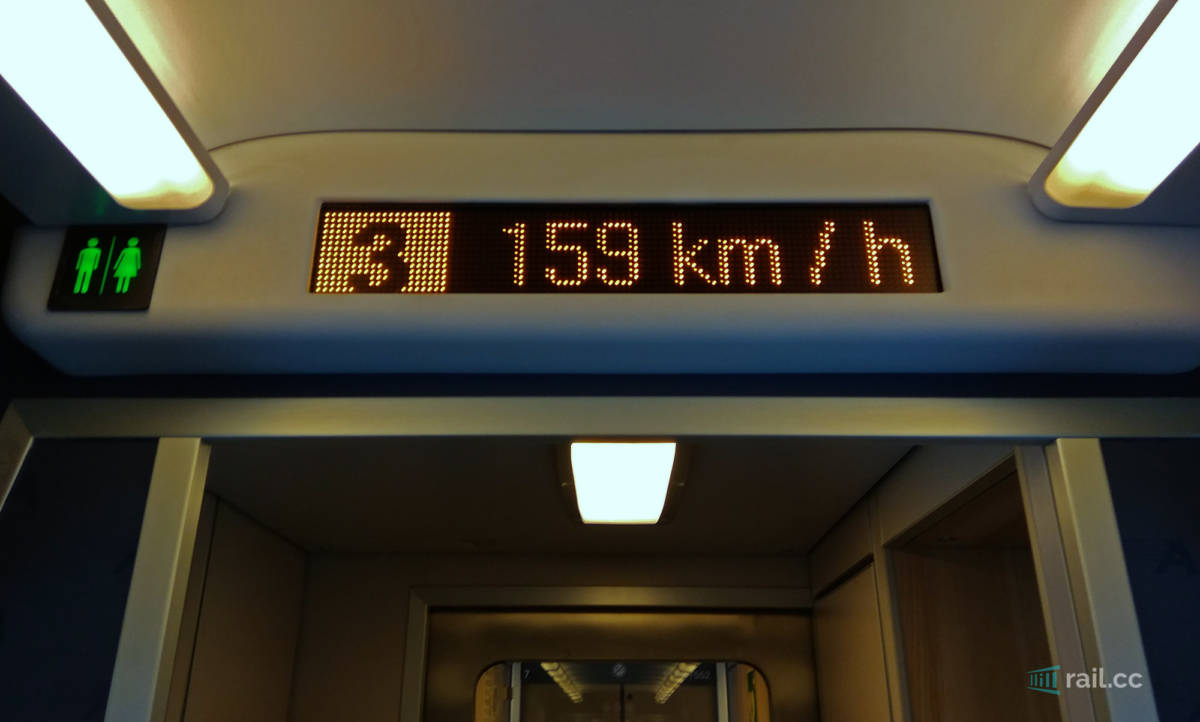 In 3.5 hours from Saint Petersburg to Helsinki

The Route from Saint Petersburg to Helsinki

The railway distance between Saint Petersburg and Helsinki is 443 kilometers. Allegro allows you to get through in 207 minutes. There are six stops on the route, all are pretty short, and two of them are only of a technical necessity and legal formalities. 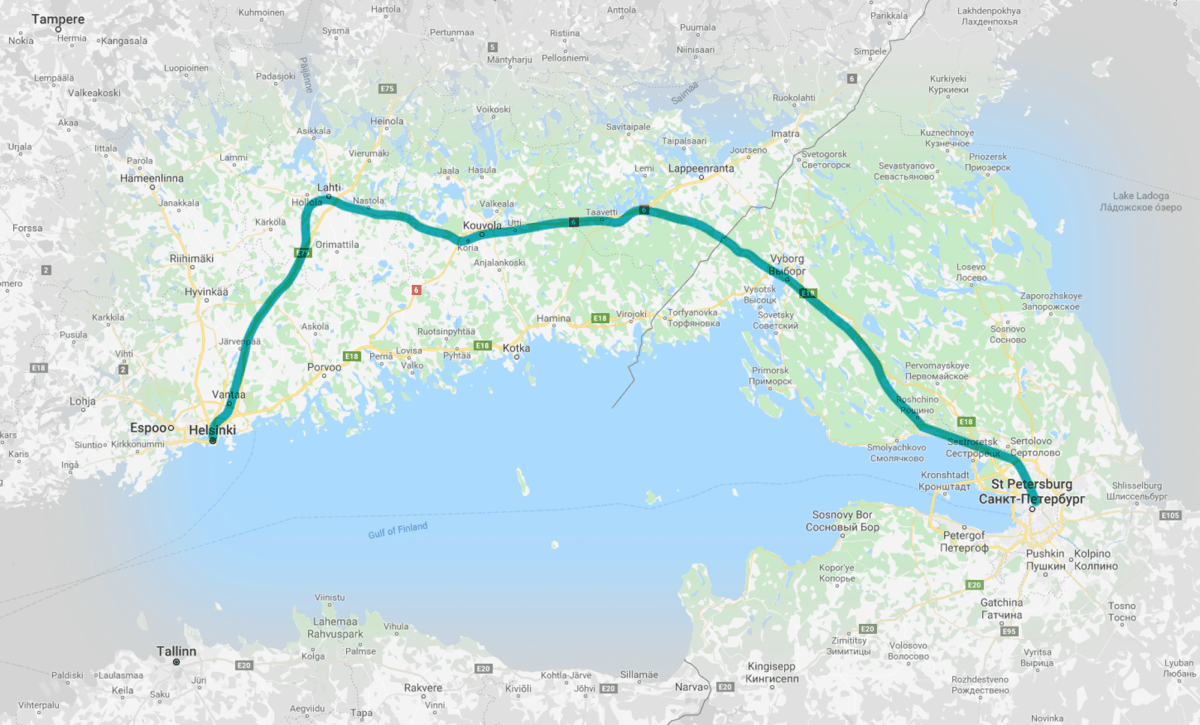 The first stop is Vyborg (an interesting town with a long history which I recommend to visit, by the way). Russian border control is already finished, it is just a pause before the train continues its movement. 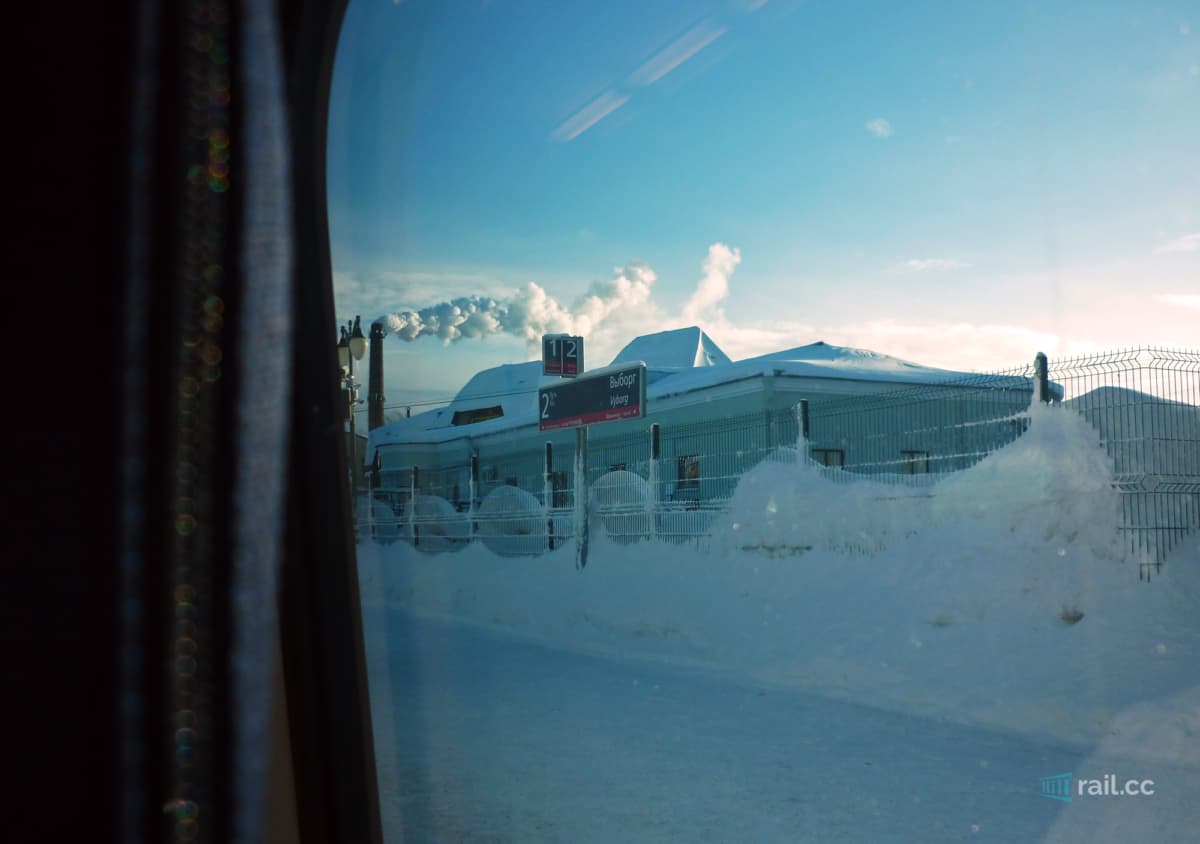 There is a winter wonderland outside the window for the most part of the trip. Coniferous trees are covered in snow and smeared out by the high speed. By its nature, the beauty of winter is slow and almost uneventful. Allegro allows you to enjoy it from an interesting point of view, in a fast forward mode.

After some time we get to Vainikkala - a station between two countries - where Finnish officials get on the train in order to start some document-checking procedures. The third stop is Kouvola - where all the officers get off (the control is fast and easy, it happens on the run). After that the border is officially crossed, and Allegro has three quick stops on a territory of Finland: Lahti, Tikkurila (Vantaa) and Pasila (Helsinki) (the latter is where some passengers switch to a train to Turku).

Helsinki appears before I know it. The trip was intense on the outside and relaxing inside. Maybe high-speed trains do not give you much in terms of romantic mood and poetic feeling, but they offer a pleasant sense of comfort and save a lot of time. Anyway, now I gratefully leave my soft seat number 35. 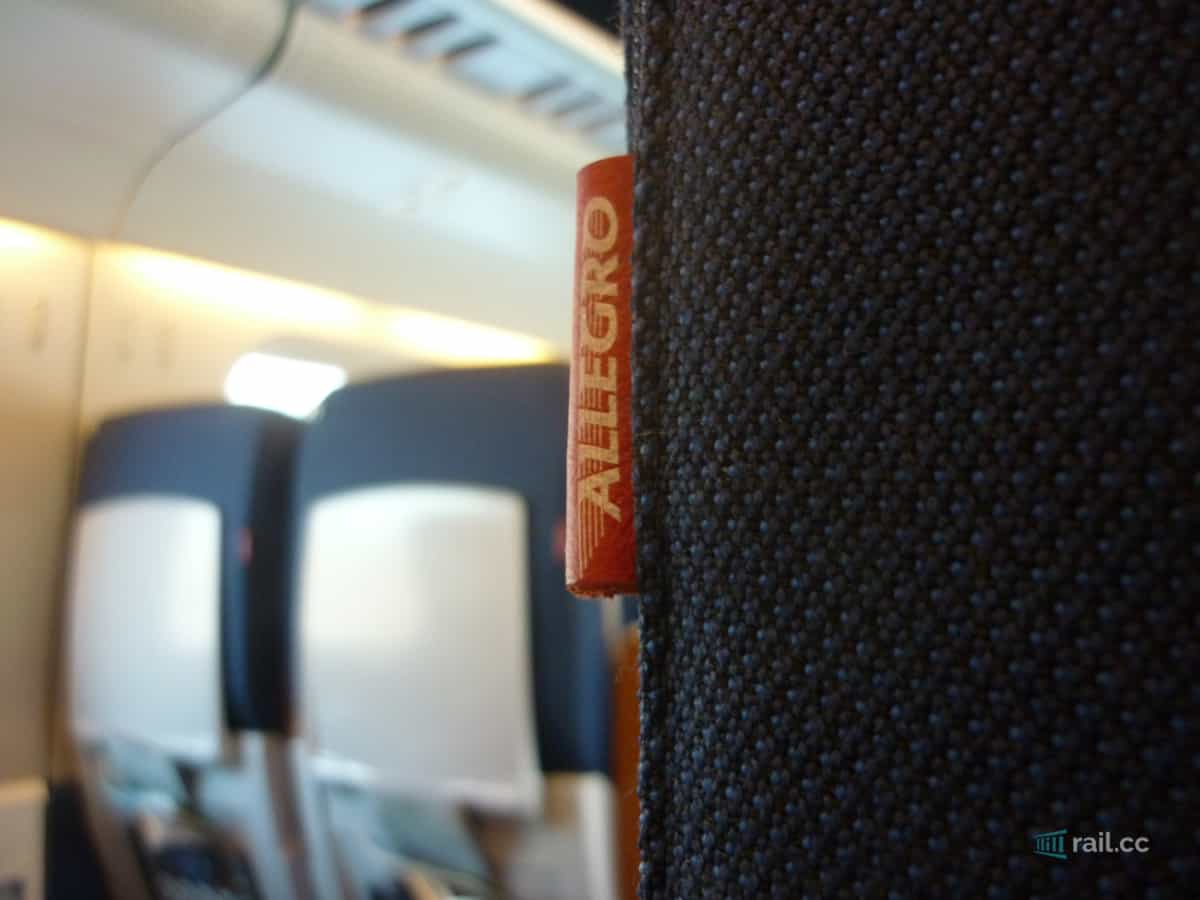 I shoot my final glances at Allegro, pull a warm cap over the ears and guide my steps into Helsinki, snowy and windy.

A quick note about tickets

I’ve got my tickets via RZD (Russian Railways) website (there is also a mobile app) a few days before the trip. It was in the so-called low season - so it makes sense to buy tickets in advance if you travel in summer. Also notice that prices depend on a day of the week. Russian Railways have a convenient option of electronic registration. In most cases this option works automatically by default. If you have this electronic registration, there is no need to print out your ticket, a passport is enough to get on board. Check the availability and prices using RZD, Omio, VR or RealRussia, and let all of your trips be nice!