Oslo and Bergen, and the train in between

Everything about both cities and the beautiful train ride.

The Flåm Railway in Norway ranks high on every list of Europe’s most beautiful train rides and this is well deserved. It branches off from the Bergen Line (the railway connecting Oslo with Bergen) where this blog is about. On a normal day there are 4 services between both cities and all 4 are worth a try. Because this route it self is beautiful as well. In this blog I will explain everything about Oslo, Bergen and the line in between.

Oslo has 3 airports near the city but most people will arrive per plane via Oslo Gardermoen International Airport. The airport is located 50 km towards the north east of the city what is a 24 minute train ride away. There are three convenient ways to travel from the airport towards the city. Flytoget is the direct train service. Although it sounds perfect and makes a lot of advertising it is not the cheapest. Flybussen is the frequent bus service but takes 50 minutes to arrive. Costs are shown below. I prefer the VY train myself since it is the most 'normal' way of travelling. VY trains are included in Interrail, Flytoget is not. But consider the price and your Interrail daily price before travelling on Interrail. 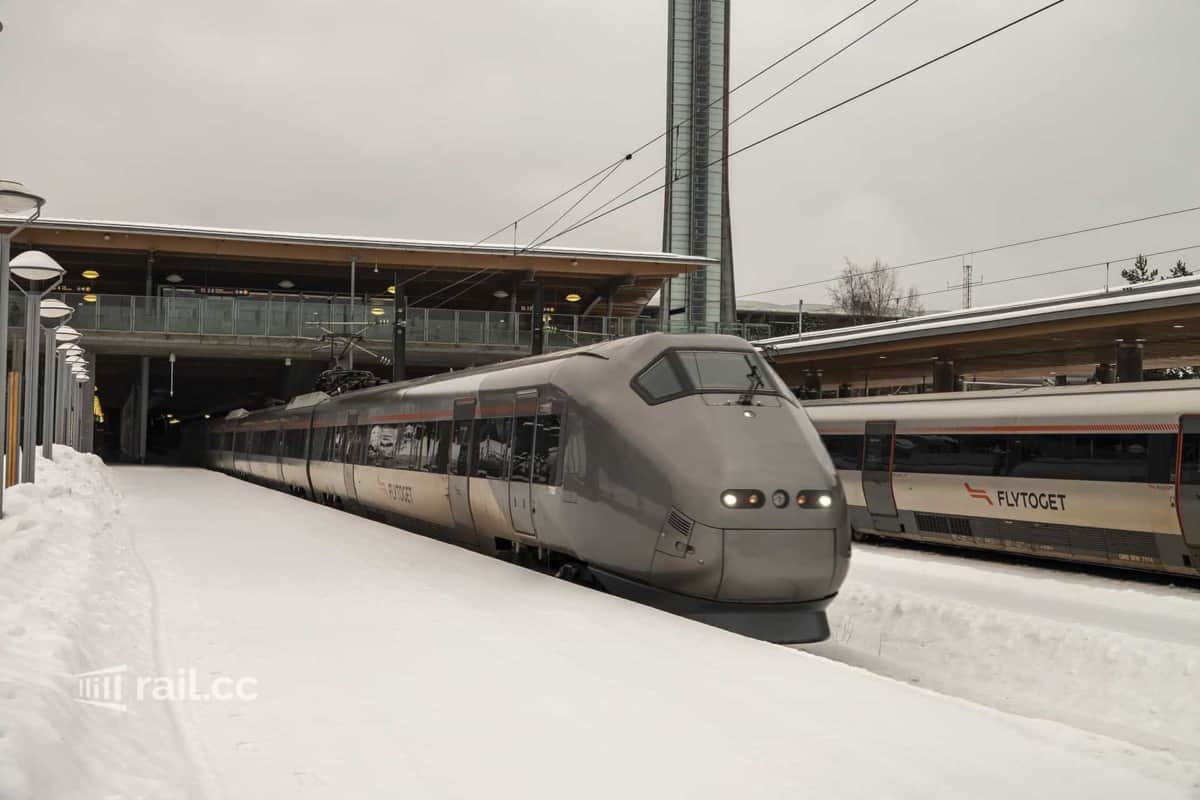 The Stenaline ferry moors directly next to the city center in the harbour. Stenaline has a daily connection to Fredirkshavn (DK). The Stena Sega sails during the day (8:45-18:30) from Frederikshavn to Oslo and during night (including hut, 19:30-07:30) from Oslo to Frederikshavn. I personally really liked this boat, it has plenty of entertainment and the views by entering Norway's fjords are amazing.

The DFDS ferry from København to Oslo moors as well on the same location in the city center. The daily departure from Oslo and København (15:15 - 09:45). DFDS offers a more cruise like experience than the more basic Stenaline ferry.

The train connection from Stockholm to Oslo isn't that convenient as well. There are only 2 direct connections. The Stockholm departing 09:10 and 15:08 arriving in Oslo 15:09 and 21:24.

With an increasing number of new neighbourhoods with eye-catching architecture, it is rapidly transforming into a cosmopolitan hub at the same time, though, it still maintains a relaxed atmosphere. Even in the winter keeps it its cosy atmosphere.

If you are visiting Oslo, then you have to see the Opera House. It is located near the central station and the harbour. The roof is covered with marble and granite what makes it appear to rise from the water. You are allowed -encouraged, actually- to walk on its roof.


Find a cheap accommodation in Oslo


You shouldn't miss the Royal Palace either. Built in the first half of the 19th century, it is the official residence of the present Norwegian monarch and it has 173 rooms in total. If you have time be sure to wander around the Palace's Gardens. 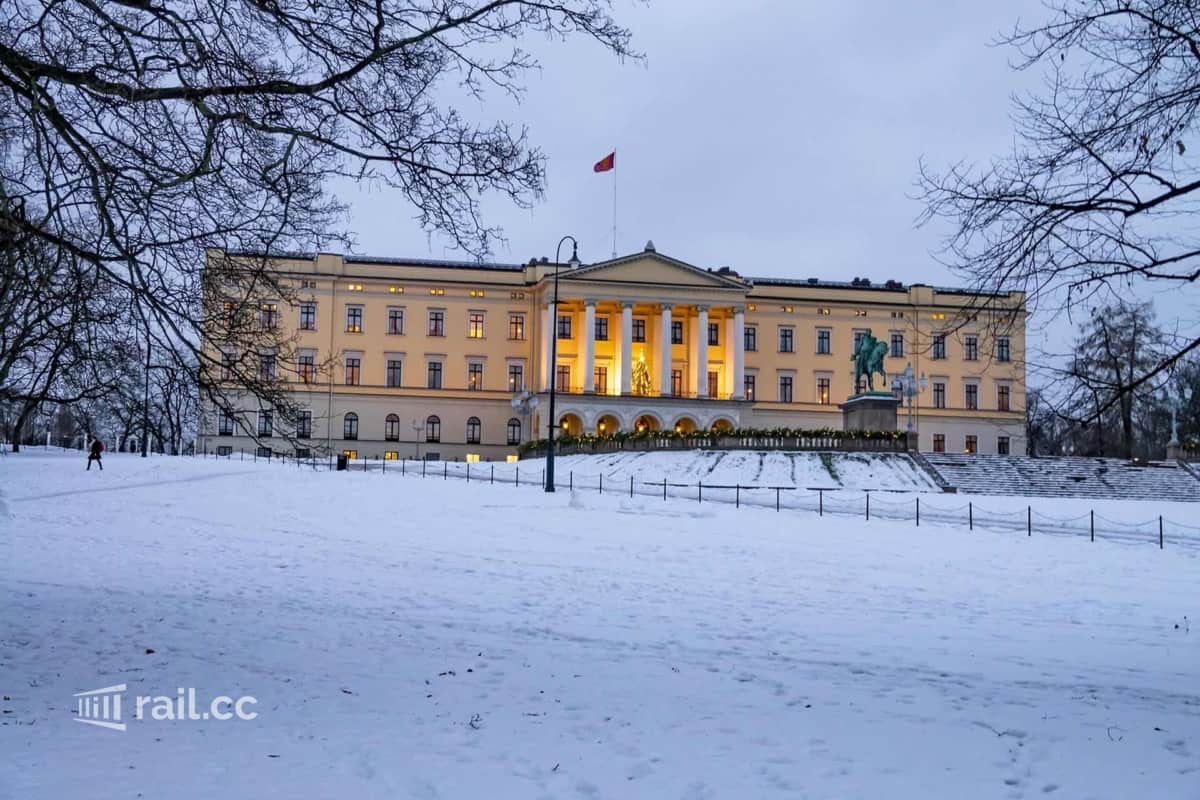 The Oslo Viking Ship museum (Vikingskipshuset) is really worth a visit. Located at Bygdøy with Viking ship discoveries from Viking tombs around the Oslo Fjord. The museum displays the world’s two best-preserved wooden Viking ships built in the 9th century.

I can really recommend taking Metro 1 towards Frognerseteren. It winds slowly up the mountains of Oslo and the end station is in the middle of the woods. On its way you will find the Holmenkollbakken, Oslo's ski jump. The last station is located in the middle of nowhere. In the winter the starting point for skiers and sledding, in the summer for a lovely walks with great views. 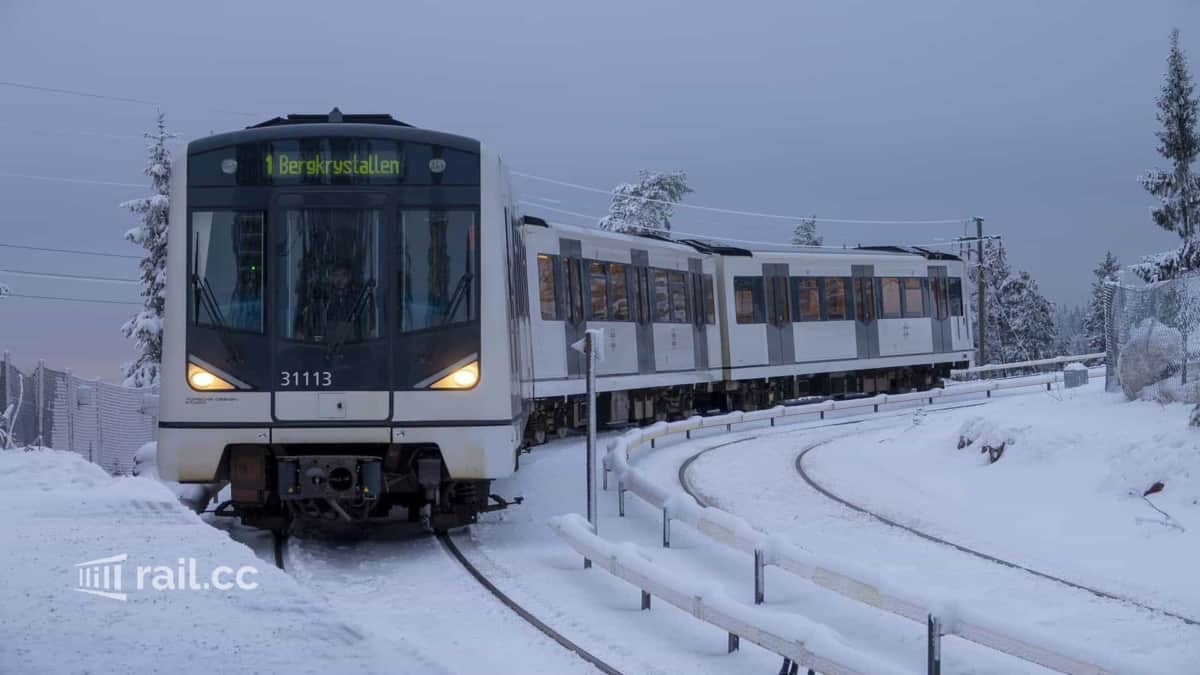 Public transport is very easy to use. The local transporter is called # Ruters operating metro, trams, buses and ferries, and tickets are valid on VY trains in Oslo and Akershus. The easiest way to buy your tickets is via the VY app (Ruters Tab) or there own Ruters app. There you can buy your single or 24h ticket within just a click.

1 Zone tickets are just enough for most tourists. That covers the whole metro system. An 1 zone, 24h ticket costs 105 NOK (€10,70). Keep in mind that your ticket is valid 2 minutes after buying.

There are three day trains and one connection overnight scheduled on this route from Oslo to Bergen . The journey time for the almost 500-kilometer route is about six and a half hours. Personally, I think the route is worth seeing and recommend the trip over the day. The Norwegian highlands between Geilo, Finse (highest point) and Myrdal are phenomenal. In the wintertime I do recommend to take the early train since the 12 hour departure will arrive in the dark by Finse.


The Norwegian saver fare tickets are called “VY Minipris”. If you book in time, you will get these saver fare tickets from Euro 25. They are available online (you receive them as email) on the websites of ACPRail and VY. But because this route is really popular, the prices rise quickly.

- VY Komfort is a separate section of the train where everything is designed for a relaxing and productive journey. More comfortable seats, your own (bigger) table with more legroom and PC power outlet make an more efficient work space. And the day's newspapers, coffee and tea come free. Komfort is offered as a supplement to ordinary fares and costs NOK 100 per person regardless of the length of your journey. It can be booked when available on most routes.

- VY Familie is a separate section of the train especially for families with children. It offers more ground room for children to play, it even has its own playground with climbing rack. It offers children's movies and books to borrow.

- VY Kafé is the restaurant car located in the middle of the train. A sandwich costs around 7 euros. Hot meals are more expensive, but by Norwegian standards still to an affordable price. The menu can be found here. Keep in mind that the take-away version cheaper is than the restaurant version.

- Pets on board are allowed. You pay 50% of an adult ticket when travelling with dogs taller than 40 cm. In addition there is an separate section of the train especially for owners with there pets. Pets aren't allowed in the familie, komfort, kafé or sove (sleeping) compartments of the train.

There is no such thing as First class in Norway. Komfort can be seen as a sort of First but it is just an extra option on your normal ticket. First class Interrailers do get the Komfort upgrade for free.

For more information you can contact your conductor. He/she can normally be found outside before departure. 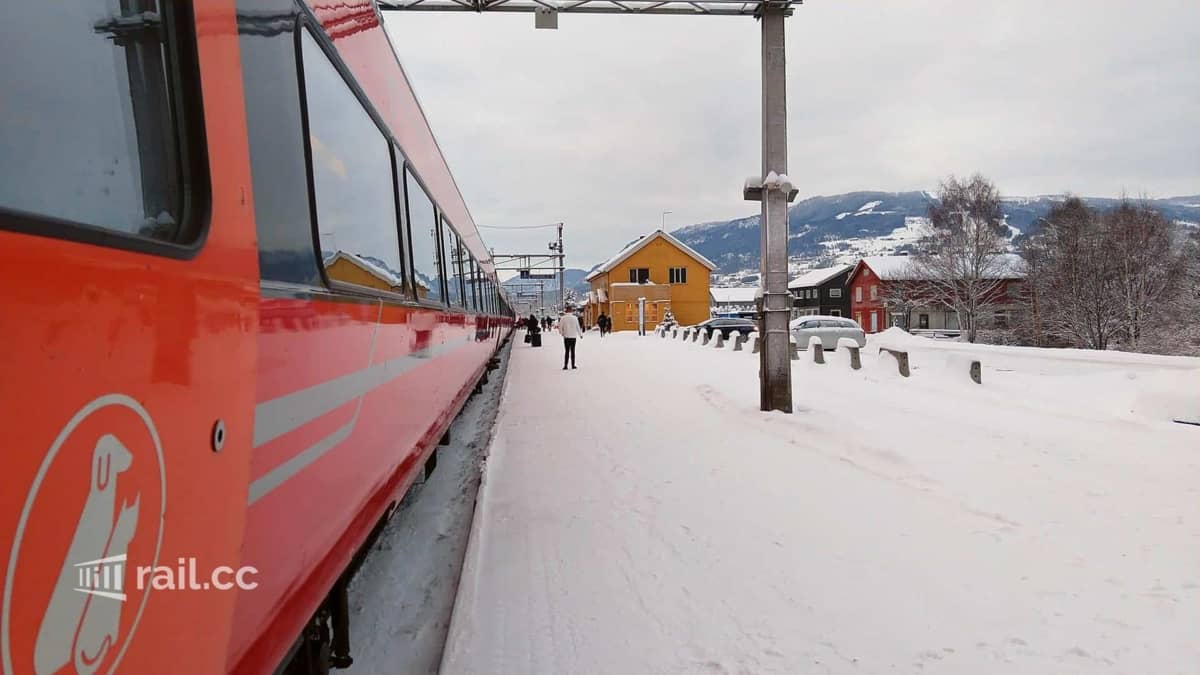 In the night train, there are generally two categories in Norway: seat or sleeping car. You get the following options:

- Normal seats corresponds to a seat car, which also runs during the day. Two seats next to each other. There is a pillow, a light blanket, a sleep mask and earplugs for every traveller in a bag. All this you can take home after your journey, otherwise it will be donated by the VY. 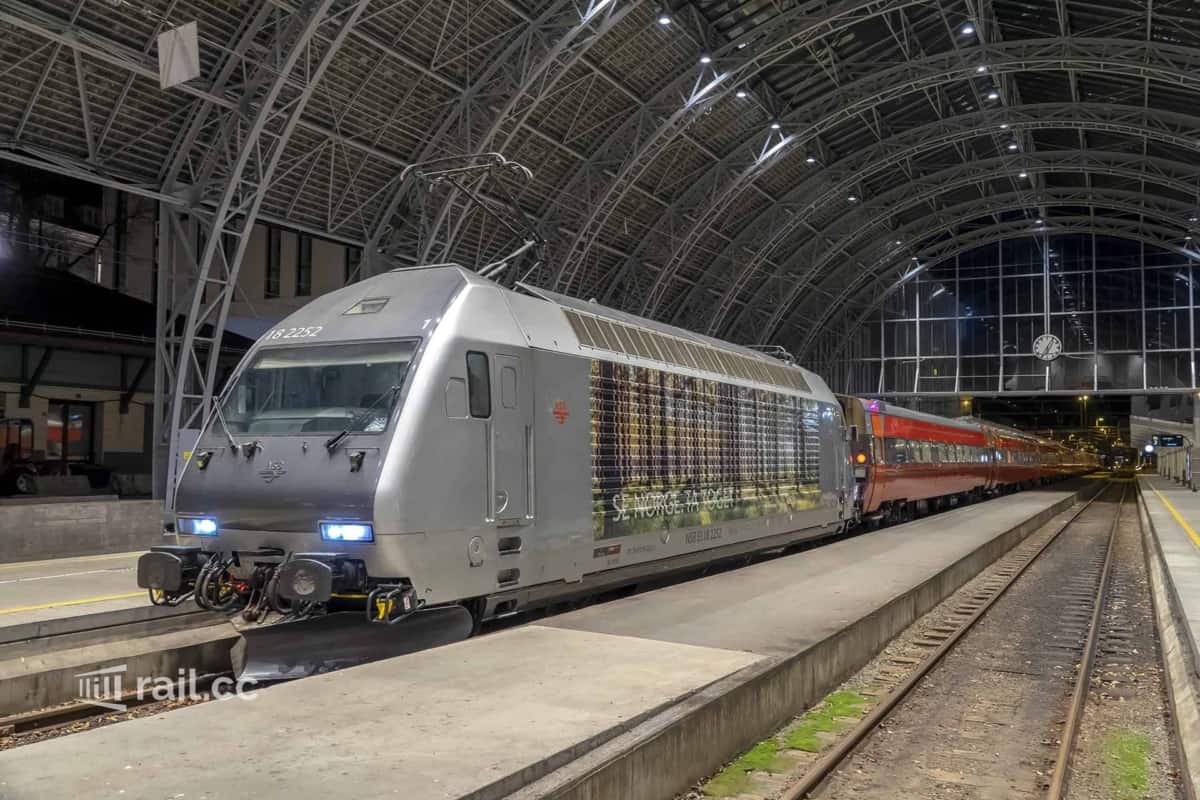 The centre of Bergen is really beautiful. I spent a lot of it wandering around instead of seeing any particular museums. The city itself is so beautiful that you can have an amazing time there even with a totally empty itinerary. For the people that love shopping, this may also be the place to be. There aren't that much big brands, just a lot of lovely small shops that managed to survive!


Find a cheap accommodation in Bergen


Bryggen is one of the sights that you need to view from up close. This World Heritage is somewhat touristy, but whose foundations date back to the 12th century. There’s so much history there, it is definitively worth your visit!

The two most popular mountain viewpoints over Bergen are Mount Fløyen and Mount Ulriken, but Fløyen is the most easiest location to get to. It is possible to hike up Fløyen from the city center (it starts behind the Fløibanen funicular), it has some really nice views out over the city. Or you could just be lazy and take Fløibanen up for the views instead. Fløibanen is a must for everyone visiting Bergen. They are opened every day all year round. I found the trip itself cool as well. The journey takes 5–8 minutes and brings visitors to the summit of Fløyen (320 m above sea level) with its fantastic views over Bergen. After that you can still go for a hike in the Bergens Fjellstrekniger what is worth the consideration.

Bergen airport is really convenient. It is super modern and clean but keep in mind that Bergen airport is primarily designed for domestic flights That means for flights leaving Norway that you'll need to cross an extra barrier on your way to your gate just after the escalator.

Don't bother to take the Flybuss (75 NOK) but take the tram instead. The trams are operated by the local transporter Skyss. A one zone (All of Bergen including airport) ticket costs 37 NOK (€3,80). Just go to a ticket machine, choose without a Skyss Travelcard and buy a single zone. Check your ticket when entering the tram by holding it in front of the reader.

Fjord Line offers a connection via Stavanger towards Hirtshals (DK). It takes 16:30 hours including a night, but I have to admit that it isn't cheap. The normal ticket sounds great starting off at 35 euro's with a seat somewhere on board, but getting the smallest hut costs about 250 euro's extra.

There is a direct ferry towards Flåm trough the beautiful Sognefjorden operated by Go Fjords.

Kystbussen offers a connection From Bergen to Stavanger in 4 til 6 hours (depending on the stops). Tickets are available from 690 NOK (€70.70) when bought on the bus to 479 NOK (€49) bought on the internet.

Norway has a lot of discounts for students. Most of the museums, activities, entree fee's in general have an student discount that goes up to 50%. Most of the student discounts are granted to everyone between 20 and 30 that can show a valid student/university card. But the rules according the discount varies a lot between companies.  Keep in mind that your student card needs to have a validation date shown: mine for example does not show one and gave me a lot of problems explaining. If you are Interrailing keep these discounts in mind, that makes your journey trough expensive Norway a lot cheaper!

Interrail is valid on all the VY trains. But please, have yourself a seat reservation since most long distance trains are full. Train reservations can only be made via the VY customer service phone number, on the train stations or via ACPRail.