Flixtrain from Stuttgart to Berlin

And a window to open

My trip with the Flixtrain between Stuttgart and Berlin. I did have quite some expectations in mind, and somehow everything turned out to be completely different, yet confirmed what I was expecting. Here is my blog about a very cheap trip halfway through Germany in a train, where you can still open the windows during a long-distance route.

According to your Flixtrain ticket, you are supposed to be at the platform 15 minutes before departure. I do as I am told and arrive exactly 15 minutes early at the platform in Stuttgart main station. The train is already waiting and looks pretty crammed. The Swabians seem to be overly punctual. Thankfully I reserved a seat. I walk along the train while having a look inside through the windows. Some carriers are freshly renovated, some are not. 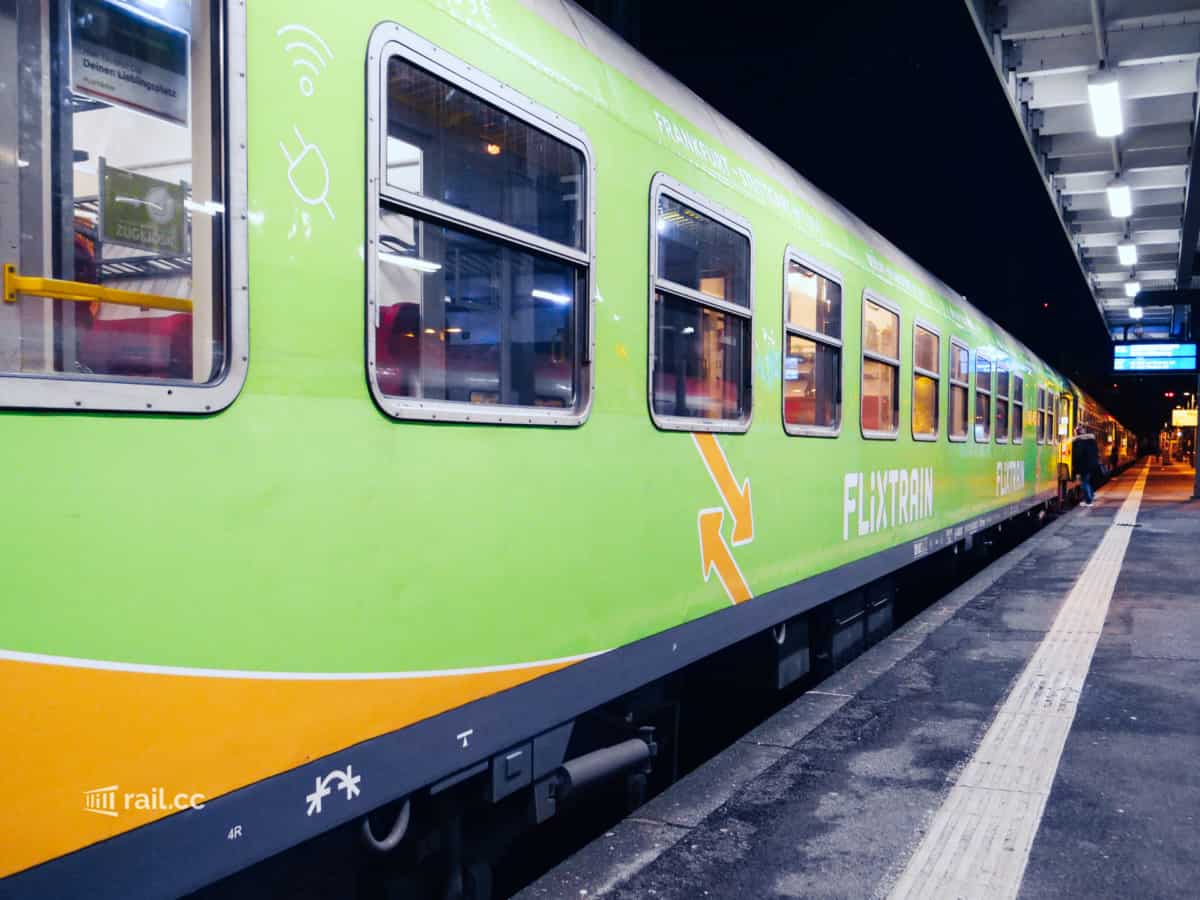 Of course, mine belongs to the two carriers (out of eight) that have not been renovated yet. What a shame! Just about when travellers are willing to pay a little extra (in this case, reserving a seat), you get the old carriage. Mmmmmh … they’re old Interregio carriages of the Deutsche Bahn – I’m reminded of my love-hate relationship with them from old times.

The trip from Stuttgart to Berlin in the Flixtrain

The Flixtrain leaves Stuttgart on time at 6.21am towards Berlin, where we will arrive 7 hours later. As it will turn out, it will be a long seven hours. As I arrive in my compartment my seat is already taken, which is no problem. I resolve the issue with the nice lady, and we get comfortable with another passenger in a compartment with five seats. I reserved one of the seats and chose the option to reserve the neighbouring seat as well (which is officially possible with Flixtrain), to have more working space. 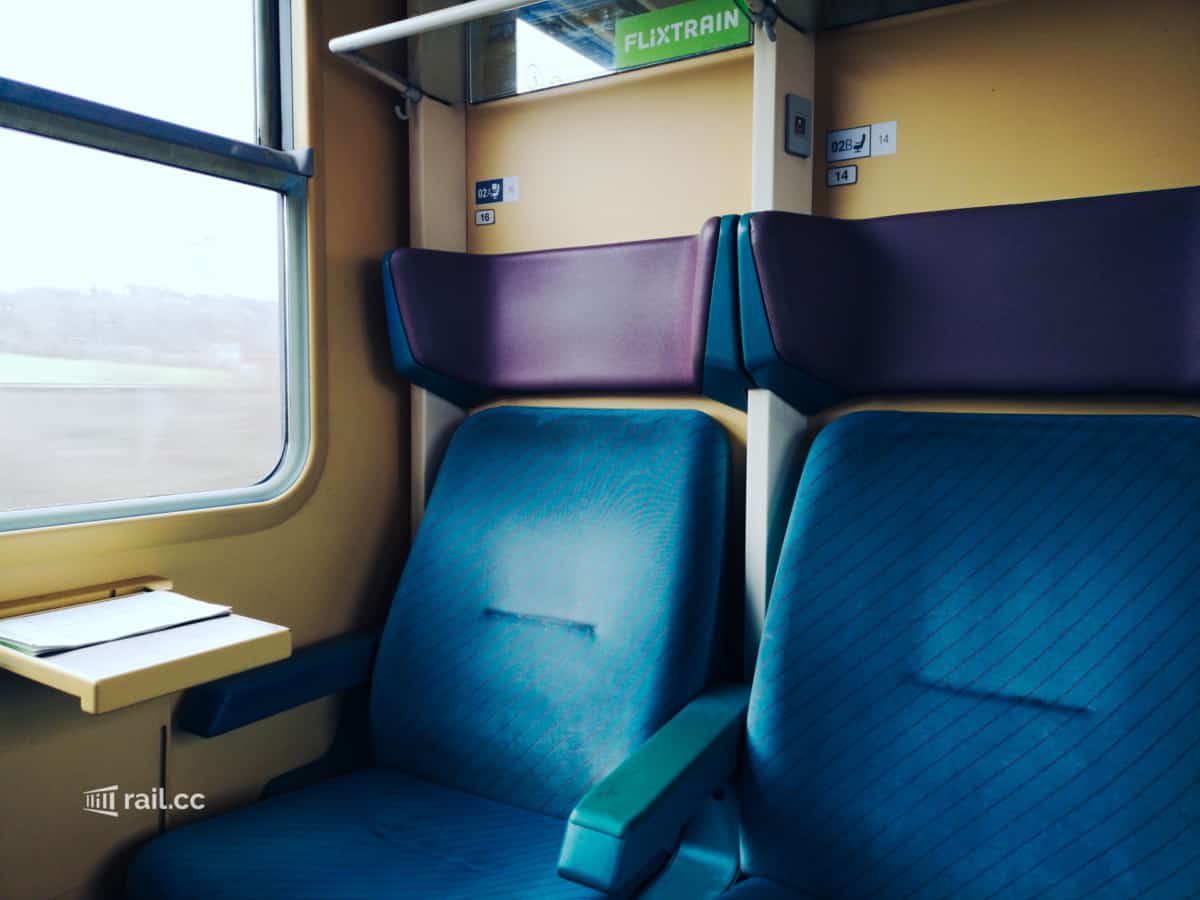 Since it is an old Interregio carrier of the Deutsche Bahn, I am unfortunately unable to find a power socket. Also, there is no WiFi – which is not a problem for me, since
I am using my phone for that anyway. Although, during the course of the day my laptop will run out of battery, which put my work to a sudden end - bummer. We are compensated for that by a window that can actually be opened. An absolute dream in this day and age, where everything is sealed hermetically.

The train is becoming fuller and fuller. The two ladies in my compartment didn’t have a reservation, so that the thing we were talking about the whole time eventually took place. One of the ladies has to leave the compartment to make space for reserved seats. At some point it also gets a little uncomfortable for me, because people come through all the time to ask if the seat next to me is taken. It’s not, since I am using it and paid for it – But at some point it just gets silly and I release my extra seat for an old lady.

As it turns out, a lot of the passengers have never – our just very infrequently – taken a train and now use Flixtrain’s cheap offering. My ticket also just cost €5 for both (!!!) seats. This kind of budget prices, where I bought my ticket, too, you can find here at rail.cc in the "News" section. Don’t miss out!

After four hours, my hate-love emotions connected to the old Interregio compartments starting to surface: I just can’t keep sitting on those seats, which hasn’t changed after 20 years. And it seems to have never improved. ? A great time to wander through the train to take some pictures. Unfortunately now it’s almost full to the last seat – and taking a photo right in a passengers face is something that I refuse to do. I promise I will hand in some photos later, once I had the opportunity to take some. 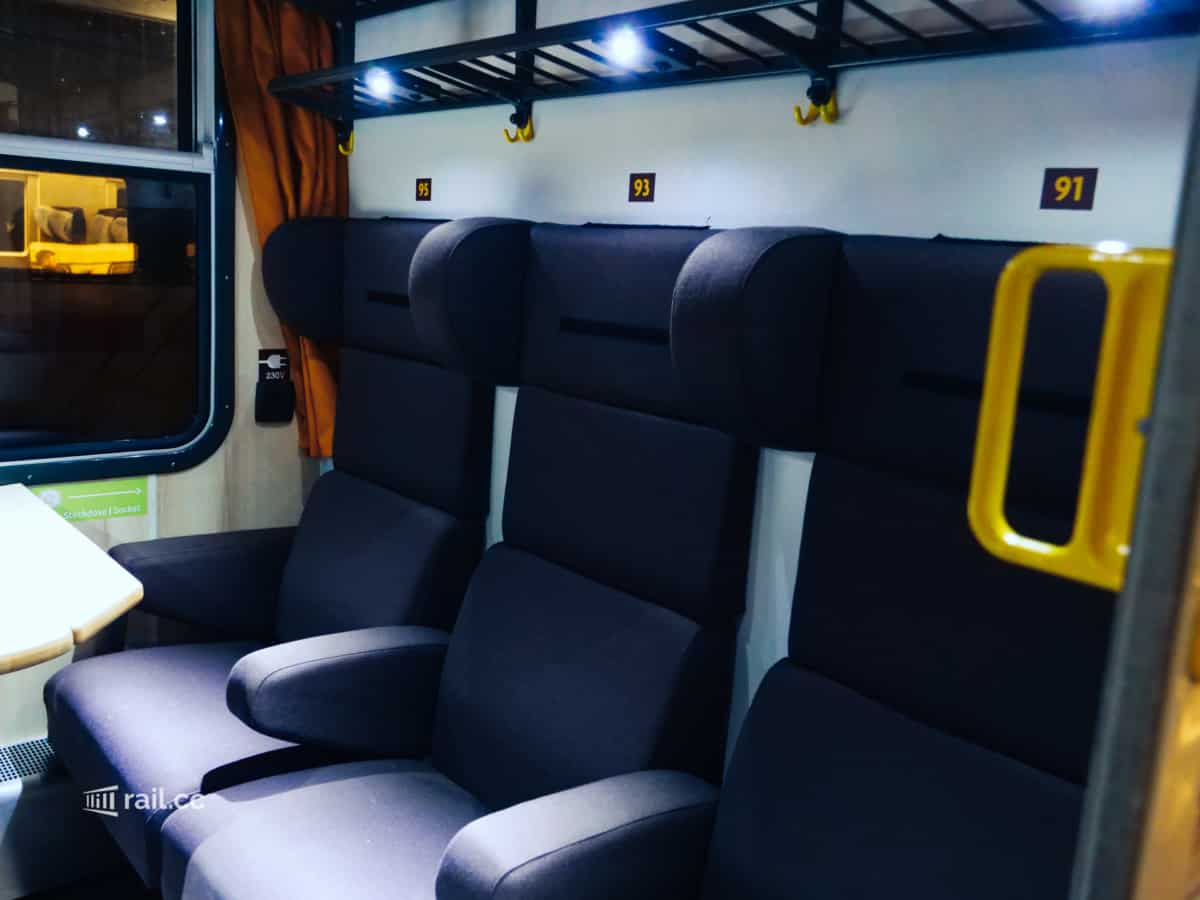 The trip creates a certain Interrail-feeling. The other passengers are all very communicative, so that this specific trip turns out to be a lot of fun! And so, I am loafing from Stuttgart via Heidelberg, Darmstadt, Frankfurt, Kassel, Göttingen, Hannover and Wolfsburg towards Berlin.

Update 2020: new route via Erfurt. Please check the schedule and fares on the Flixtrain website.

After an interim delay of 15 minutes in Frankfurt, where the train has been redirected, it is on time again in Hannover. Just as at its arrival in Berlin main station. 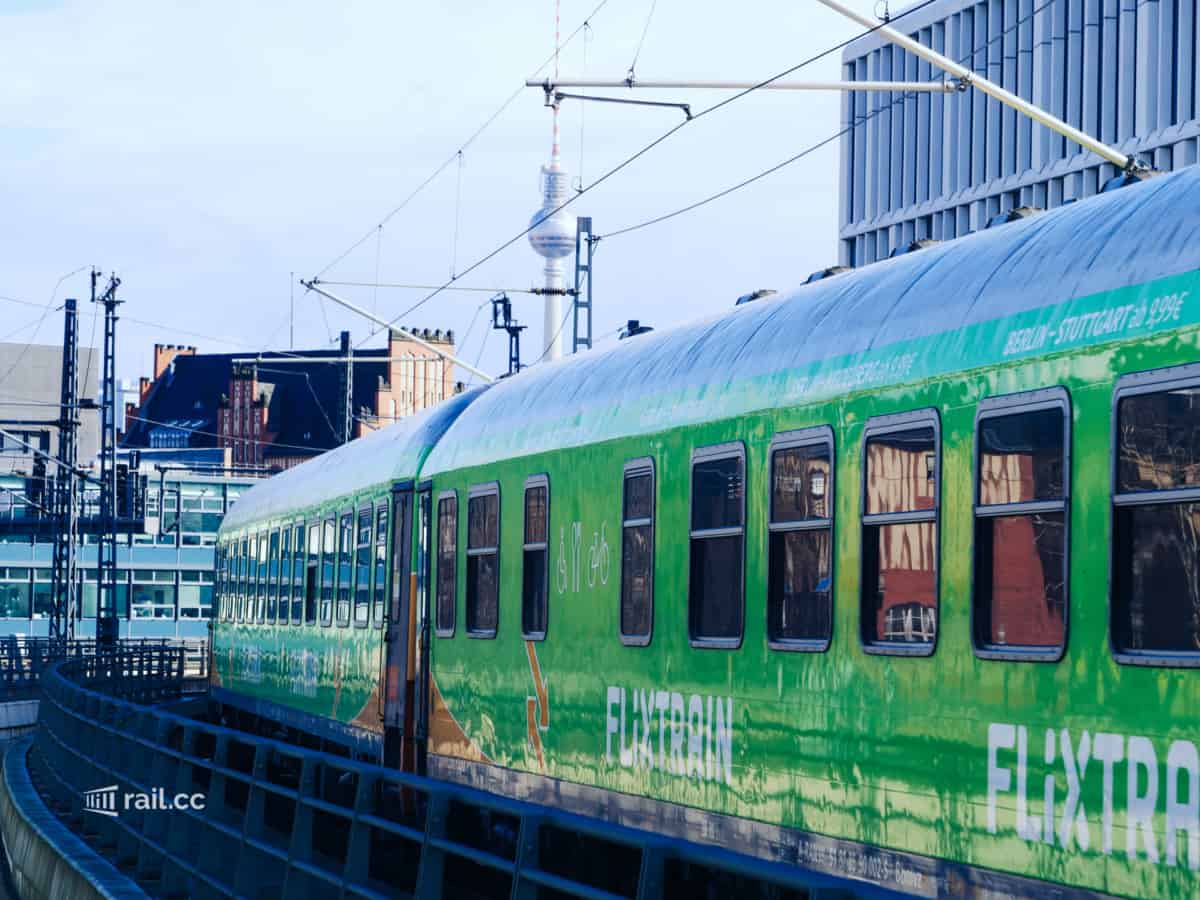 Buying tickets for the Flixtrain

I bought my ticket directly via Flixtrain during a savings campaign. With €5 for the trip (and two seats), this price is unbeatable. Generally you can also check out Omio, where you can often find alternatives, too.

On Flixtrains website you can find the timetable of the train between Stuttgart and Berlin or for the other routes, for example between Cologne and Hamburg and more.

Spending the night in Berlin

My Intercity Hotel for the following three nights is located next to the main station, two minutes by foot. Perfect. The Reichstag and the Brandenburger Tor are also not far and it is surprisingly quiet. Here you can find the >Intercity Hotel Berlin Hauptbahnhof - just book it online via the link. 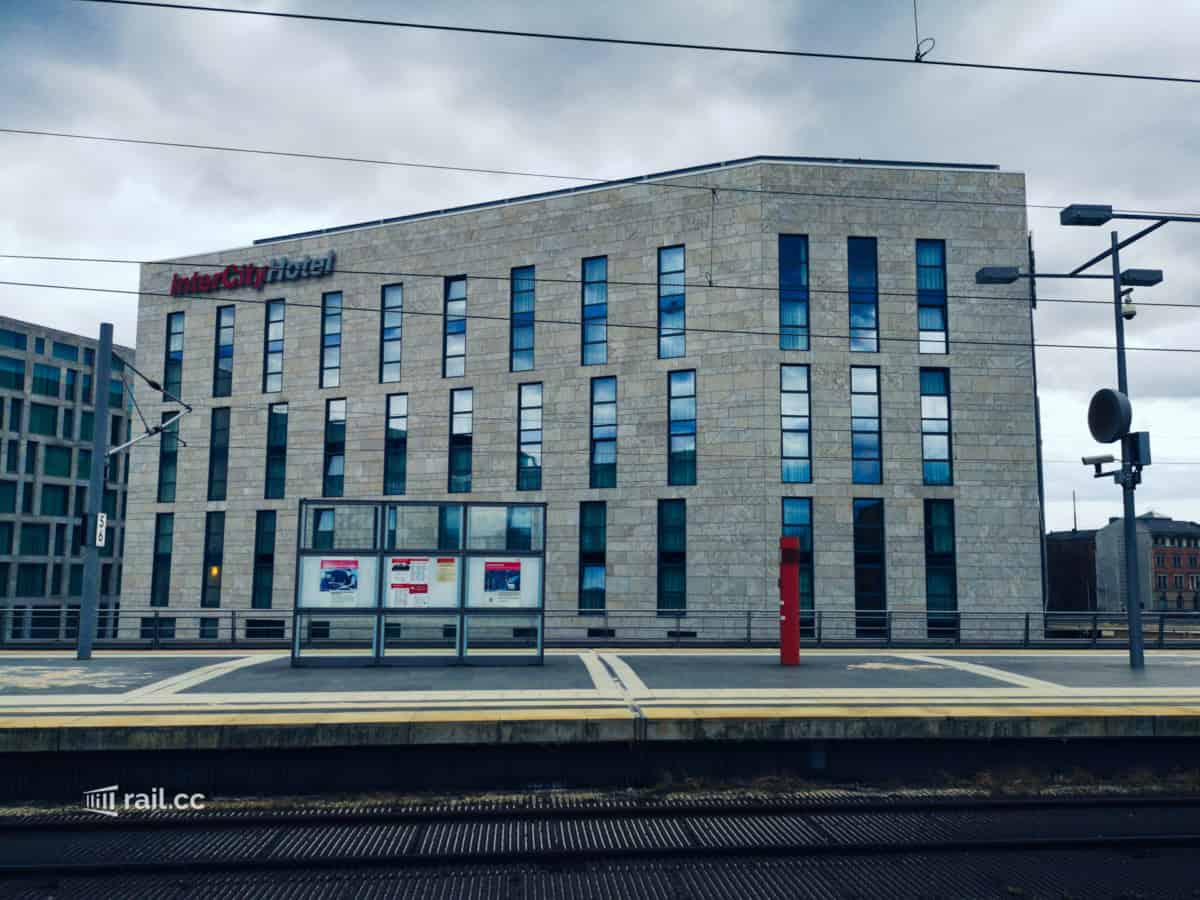 My review of the Flixtrain

Well, not all the carriages are renovated yet, but their time will come, too. My carriage was lacking electric sockets, which are also yet to come. The seats were very hard, but the price was unbeatable – €5 from Stuttgart to Berlin. Also, the travel time was absolutely acceptable. The windows could be opened – that was great! For me it felt like a trip to the past with Interrail-feeling. Unfortunately I wasn’t able to work as planned, but had truly great conversations instead. There is really nothing to complain about really. Flixtrain: Simply different, but good!