To Volcano Etna by Night Train

My train journey from Milan by InterCity Notte to Sicily

Taking the night train to the volcano Etna - a train journey that has long been in my books. This summer the time had finally come. The journey took me from Milan with the Trenitalia night train to Catania in Sicily, directly to the volcano Etna. In the following report you will find all information about the sleeping cars in the InterCity Notte and the amazing ride from the north to the south of Italy. If you prefer jumping right to the booking, here are the links to Trainline and Omio – book early and you'll be able to find great offers.


Train connection from Milan to Sicily

It's a long way from Milan to Sicily. Depending on your destination on Sicily, you should plan with at least (!) a good twelve hours to get there. Especially as direct trains in southern Italy are transferred to Sicily on a ferry (Villa San Giovanni to Messina Centrale). Direct trains to Sicily are available several times a day from Rome and Naples. As I started my trip to the volcano Etna from Milan, of course I chose the direct night train. Around 18 hours going along the Italian Mediterranean coast, what could be better? And all of this in a sleeping car - simply wonderful! :) 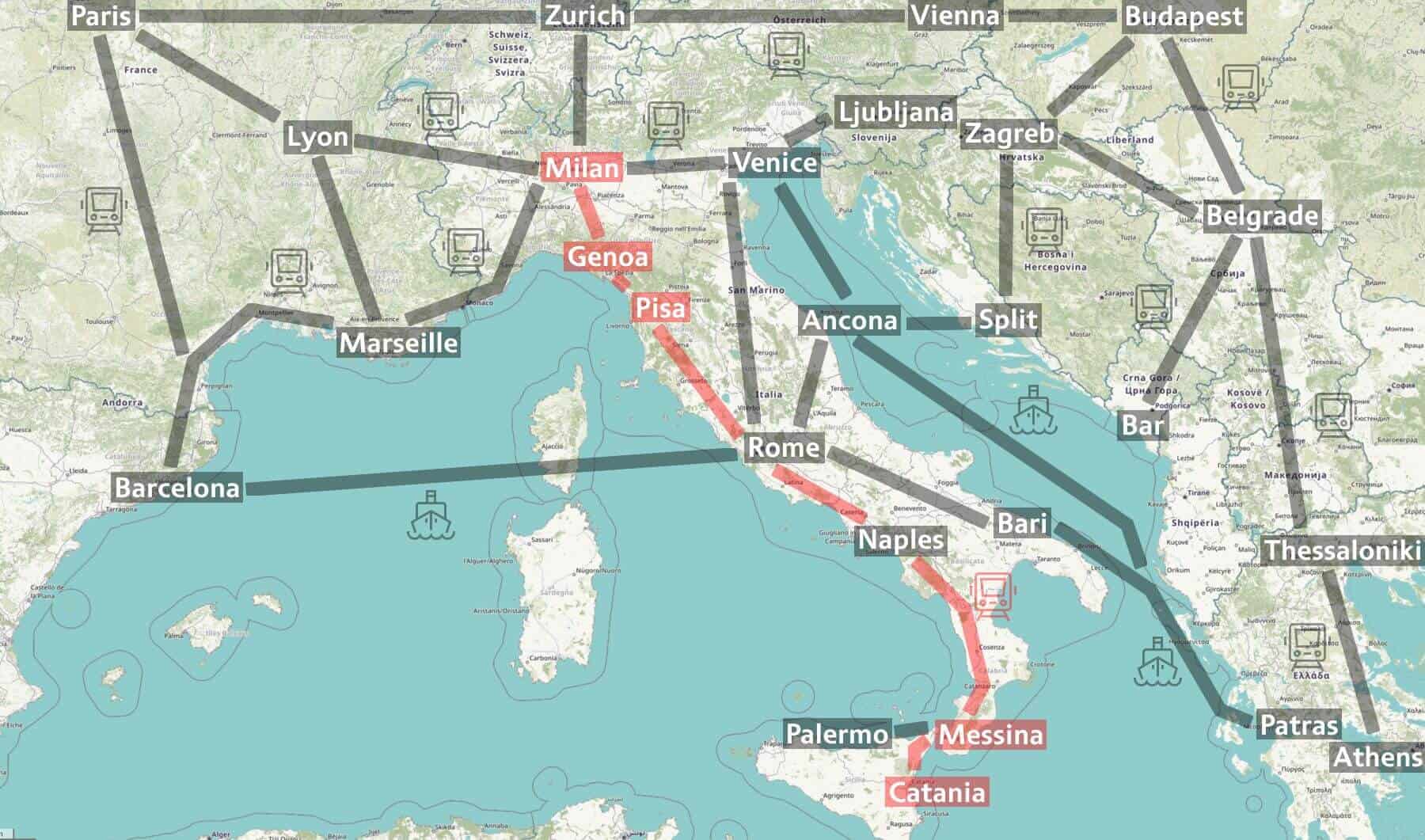 Map of Trenitalia Intercity Notte from Milan to Sicily.

The departure time at 20:10 h in Milan Centrale is just perfect. The route takes us via Genoa and Pisa. The next morning, we will already be able to see the Mediterranean coast, which the train follows until it reaches the ferry in Villa San Giovanni. From there train and passengers are transferred to Sicily (Messina) where you then arrive at the destination Catania. Going in the opposite direction, the train leaves at an equally pleasant hour in the afternoon, so you get to enjoy views of the coast and the ferry crossing by daylight.


Compare ticket prices for this connection

I already got to the train station Milano Centrale at 19:00 h, so I had enough time to buy some provisions for the trip. On the lower floor of the station there is a larger supermarket with average prices. In this case, it´s important to stock up on food, because there would not be a dining car on this train and with a travel time of just under 18 hours, you can get hungry on the way. The sleeping car is meant to include a small breakfast, though.

Platforms of departing trains are announced at very short notice at Milan train station. I thus went straight through the security check to the inside of the station. At 20:05 h the display read that our departure would be delayed by 20 minutes. When the platform for departure was finally announced, a big run to the train started and sure enough just 10 minutes later the train left the station.

The train ride from Milan to the volcano Etna in InterCity Notte is quite long at 18 hours. I really enjoy these long rides on the night train, as it gives me the chance to thoroughly enjoy the trip. Later in the morning the route continues along the west coast of Italy, right along the sea, until the train reaches Villa San Giovanni.

Here, the train is loaded on the ferry in several parts which requires a bit of manoeuvring. Passengers stay on the train during this boarding process. Only once your wagon is securely positioned in the belly of the ship, you get to leave and go up on board the ship (take your valuables with you). You could also stay on the train inside the belly of the ship, but that is pretty boring. Do not expect a conductor or anyone to advise you when it´s time to go upstairs - just do it, the train crew is not around anyways. The step going down from the train is quite high, but they have boxes ready on the ferry, which you can use to get down easier. I helped a few of the older passengers to get off the train. The crossing over the Strait of Messina takes about 30 minutes, if I remember correctly. Smelling the fresh sea air is a great treat. Here are some photos of the whole manoeuvre, the train on board the ship and afterwards getting off board.

After leaving the ferry, the train continues to Messina Centrale station. After a short stop there, we´re finally on to the last stretch towards the volcano Etna and my destination Catania in Sicily. 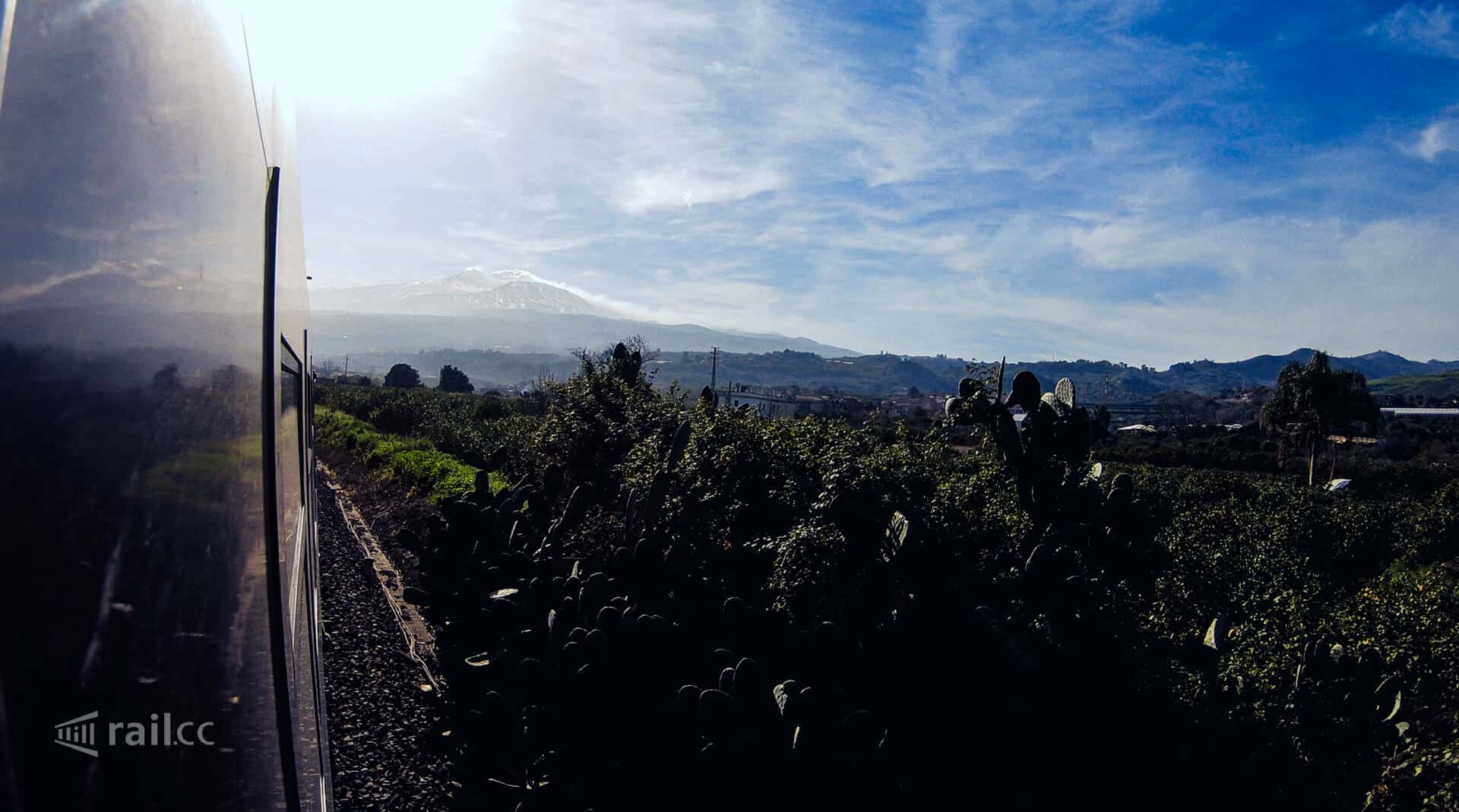 With a little over two hours delay, we finally reach the station of Catania. In unfortunately cloudy, misty weather, a taxi takes me to the airport to pick up my rental car. With the train being late, I had to take a taxi which, with just under 30 euros, was really expensive. The regular bus (every 20 minutes / Alibus AMT line 457 / orange color) comes in a lot cheaper with 4 euros (pay the exact amount to the driver). The bus leaves in front of the train station and takes about 25 minutes to get to the airport.


Sleeping car in the InterCity Notte to Sicily

The sleeping car in the InterCity Notte from Milan to Sicily has seen better days, but it was still in good shape and quite comfortable. Unfortunately, as usual, the window did not open during the trip. There was only a small window to tilt a tiny bit. I think the photos illustrate well what it looked like in my night train compartment. I had booked a single compartment for this trip on Trainline. The price was € 89.90 - for 18 hours in a sleeper car, I found that a decent price. There is a toilet on the floor. In the compartment itself, I had a sink. In the evening, the conductor came and brought a welcome pack, which was quite extensive (soap, towel, toothbrush, comb, ...), aside from that, you were given two small bottles of water. At 09:00 h in the morning, we got espresso, two packed sweet croissants, a small water and a juice – a typical Italian breakfast. Plus, the day´s newspaper. There was no wifi on board. But now on to the photos, which are also filled with information.


Booking a rental car at the airport of Catania

In order to move more freely over Sicily and be able to reach some more remote regions, I recommend getting a rental car. For me, it´s often the only option to get to the best photo spots, which would otherwise be impossible, or very hard, to reach by public transport or on foot.

Rental cars at the airport Catania can be booked easily and for reasonable prices via Rentalcars. I suggest you add an insurance that covers every damage (= 0 Euro deductible). As they always try to make you pay extra for scratches and dents allegedly caused by you, be prepared. The "friendly" guy from Avis tried playing this trick on me again this time. But since I had the extra insurance and taken a video of the car when I picked it up at the airport, he had no chance. Don´t try this with me Mr. Avis! ;)

As update: in fall 2020, however, I have made very positive experiences with the rental company Locauto. Fast, friendly and a good car.


Where did I bought my train ticket?

I bought my train ticket via Trainline, which offers the same prices as Trenitalia, but their booking interface is easier-to-use, at least in my personal opinion. You can also check ticket prices with Omio and ACPRail or Trenitalia. By using our booking links, you will help us get a little support for providing free information here on rail.cc - the ticket price will of course remain the same for you. Many Thanks!


Compare ticket fares for this journey


How to get the reservation for Interrail and Eurail

If you travel with an Interrail or Eurail pass, book the rail pass reservation either via the service of ACPRail (you get an email with the reservation attached) or try the website of Trenitalia. First select your connection and click the standard ticket price. On the next page select the type of accommodation you want ("service") and select under "offer" the option "Global Pass". It is also possible to get the reservation at ticket machines in Italy or at ticket windows in sta


Where did I sleep?

Since I wanted to take a few more shots of the volcano Etna, I chose a place a little out of the way on the slope of the volcano. Unfortunately, my train arrived in Catania two hours late, the weather was not really great and after a short night it was already time to go back. Nevertheless, the stay at the Hotel Boscoscuro, which I had chosen as the ideal location for my photos, was really great! It was absolutely quiet, with great rooms, a small park and an incredibly friendly and helpful host. He designed the rooms himself, each of them individually with special little details. Even though I was the only guest that evening, they still spontaneously prepared a delicious dinner for me. Please find more photos and information about Boscoscuro here. By the way, the hostel has been rated a 9.7 on booking.com – highly deserved! :)

Update fall 2020: I came back with my family and it's just as great as I remembered it. There was a delicious menu as dinner with table wine for less than 20 Euros per person.

You can easily get to Milan on board of various direct trains: from Paris or Marseille in France, from Zurich in Switzerland, and with a direct daytime train from Frankfurt, or a night train from Munich in Germany. With the nightjet train you can also reach Milan easily from Vienna, Austria. Tickets for all of these routes can be purchased via Trainline. You will also find travel times and more useful information there. Be careful to allow enough time to transfer to the night train in Milan.

Find more information in our blogs on the alpine crossing from Zurich with the Bernina Bahn, via Tirano.
The Thello night train from Paris via Milan to Venice.
On the nightjet from Munich to Rome or Milan.
And train ride from Marseille to Milan.


Personal Verdict of the train journey to the volcano Etna

It´s a really long and really beautiful train trip. At first it may seem daunting to travel by train for 18 hours; but if you have enough food and water, the ride is relaxed and comfortable. You get on the train at a pleasant time in the evening and wake up the next morning to a view of the sea. You can eat breakfast while riding along the coast. Around noon the crossing over on the ferry changes things up a little. Later you arrive in Catania at just the right time to check into your hotel. All of this for 89 euros in a sleeping car – I find that's simply wonderful! :)

If you have any further questions, don´t hesitate to ask in our friendly forum, where you will always find help.