From one capital to the other in a sleeper

The direct overnight train Nightjet from Berlin to Vienna offers a comfortable alternative for travelling between Germany’s capital and Austria. Of course, you can also fly, which is faster, but with the night train you save yourself an overnight stay and a lot of time. Departing in the evening, arriving in the morning and lots of time to sleep in.

Firstly, for our spontaneous bookers the link to Trainline, where you can book the Nightjet alongside the ÖBB.

My journey starts at a pleasant hour in Berlin. Departure is at 18.37, perfect for a nice dinner on board of the Nightjet. Unfortunately there is no dining car, which is why I bought lots of snacks at the main station. And believe me, you will find everything you could wish for.

The train arrives on time at the main station and I have about 10 minutes to find my sleeping car. Thanks to the train-formation indicator on the platform, this is an easy task. 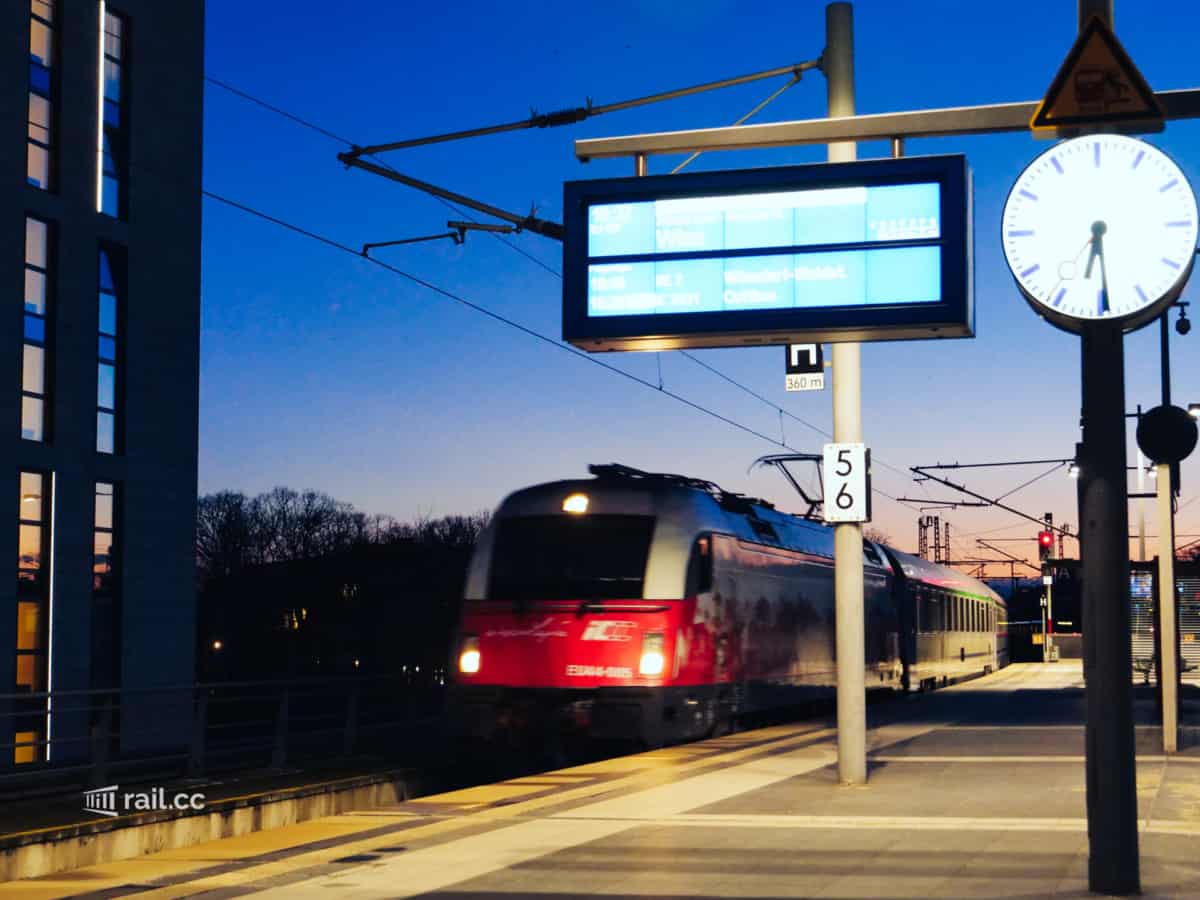 The night train consists of 9 cars in total. There is one sleeper, one couchette and one seating carriage going to Vienna. The other cars carry on until Budapest and Poland, but I’ll be only looking at the trip to Vienna this time. 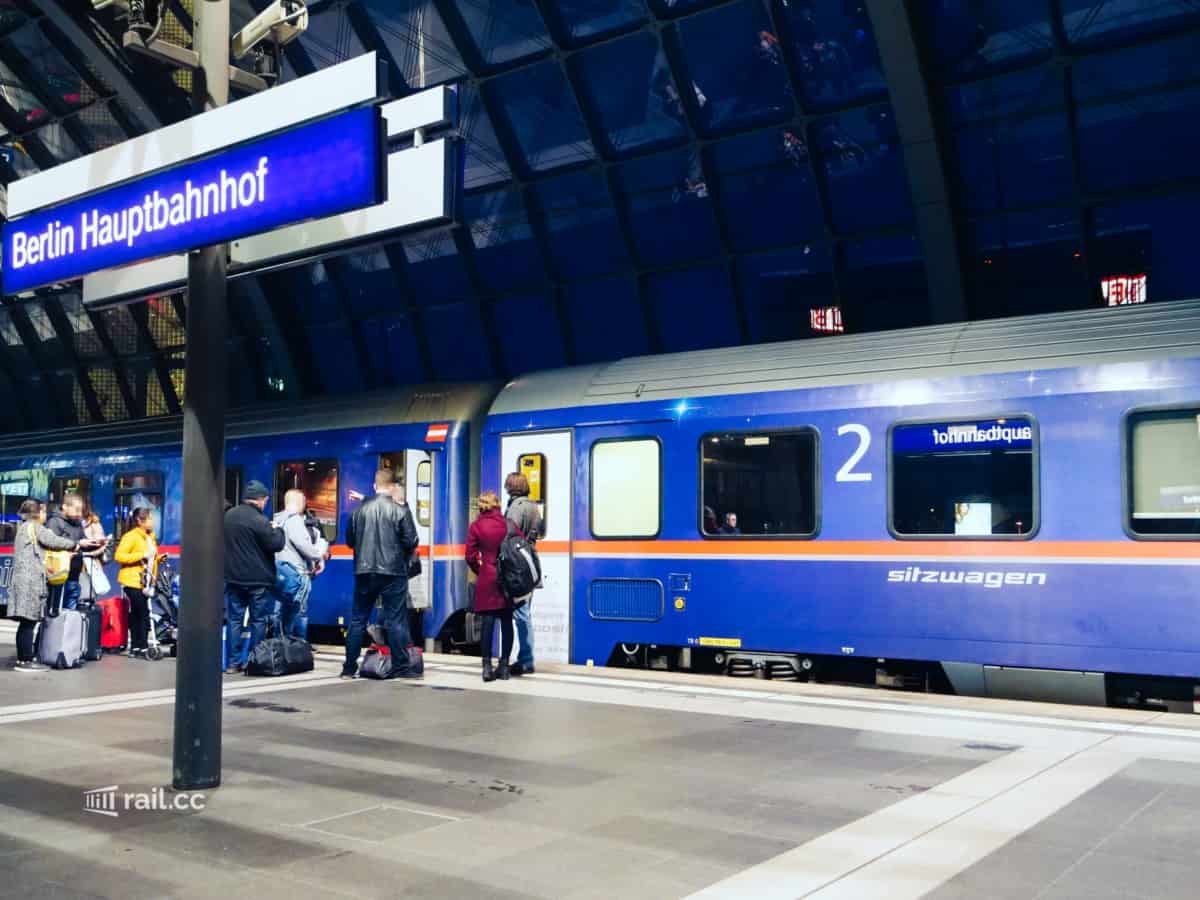 Nightjet from Berlin to Vienna

At the doors, I am kindly greeted by a train attendant. All on board. Let’s go.


Find cheap tickets for the nightjet 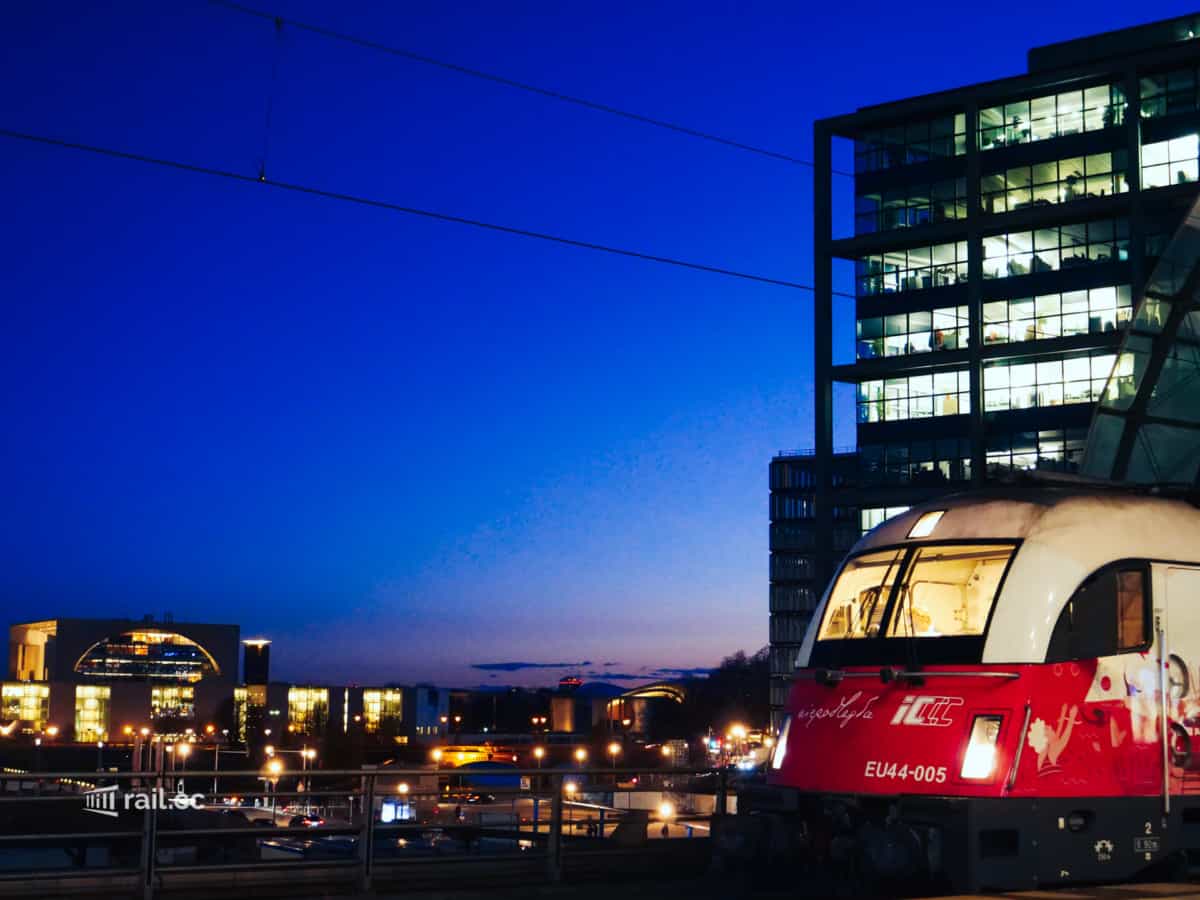 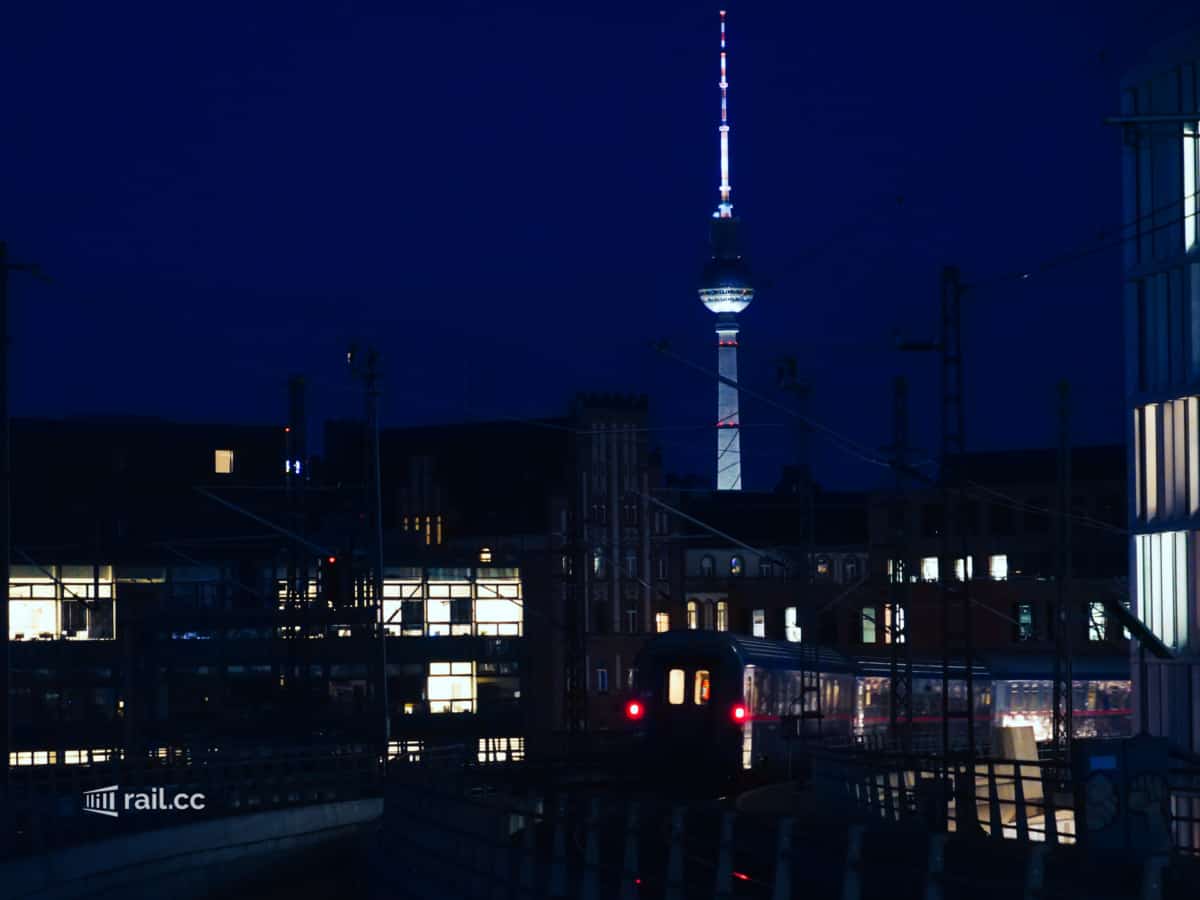 Departure of the night train from Berlin to Vienna

The trip in the sleeping car from Berlin to Vienna

Firstly, I turned off the light in my compartment, because we are going on a little sightseeing tour of Berlin. Passing the TV tower and having an extra stop at the Berlin East station.

Before the train attendant comes by to check my ticket, I fill out my breakfast wish list. There are six options to choose from. I opted for coffee, two “baked goods” (which usually stands for two buns), yoghurt and marmalade. I ordered my breakfast for 6 am the next morning.

Now a little peek into my sleeping compartment during “daytime-position”, which means, that the bed is still stored away and there are three seats and a table. I was never a big fan of those tables, because personally I think, that they occupy too much space in the compartment. Other people seem to like that though. On the table, there is a small bottle of wine and a water bottle. 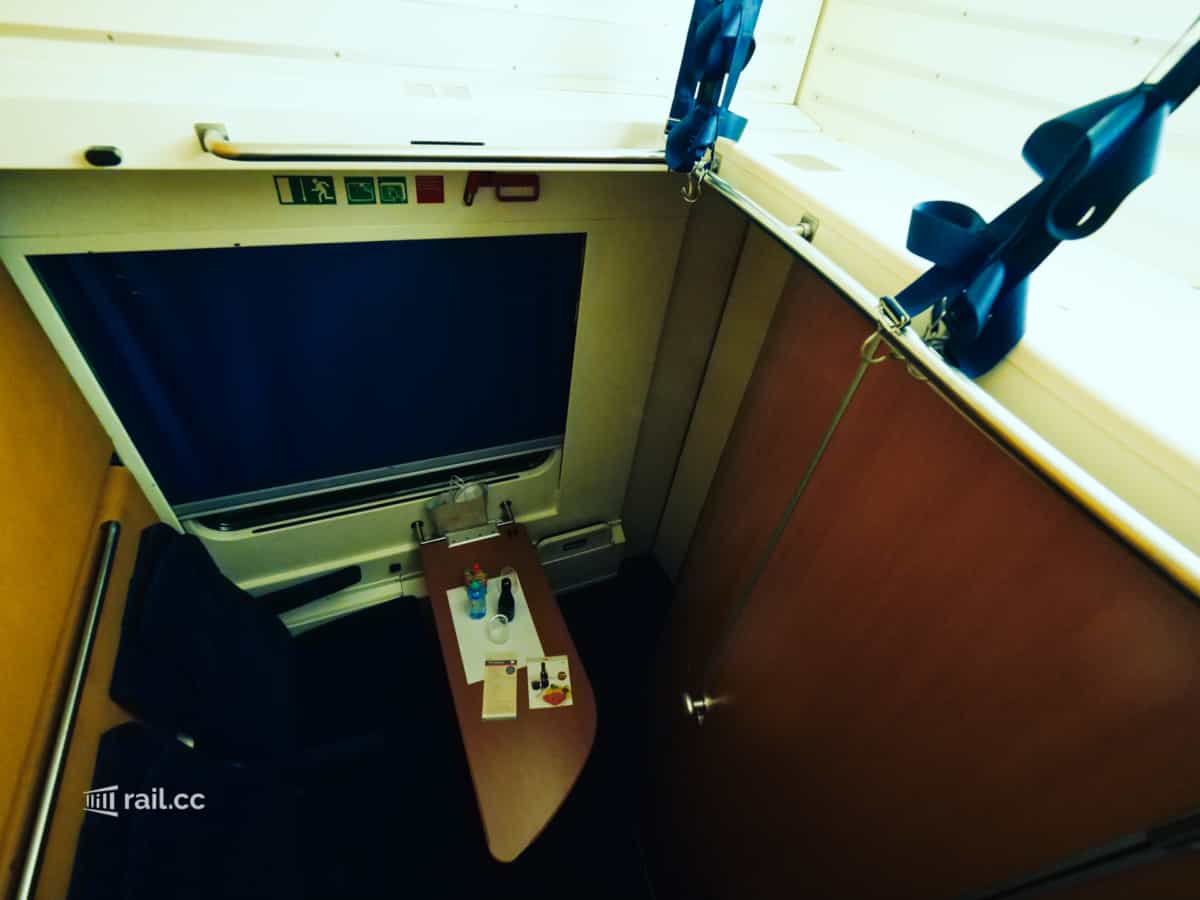 There is a little welcome package for every passenger in the sleeping compartment, which includes slippers, a small towel, water, earplugs and a little snack. 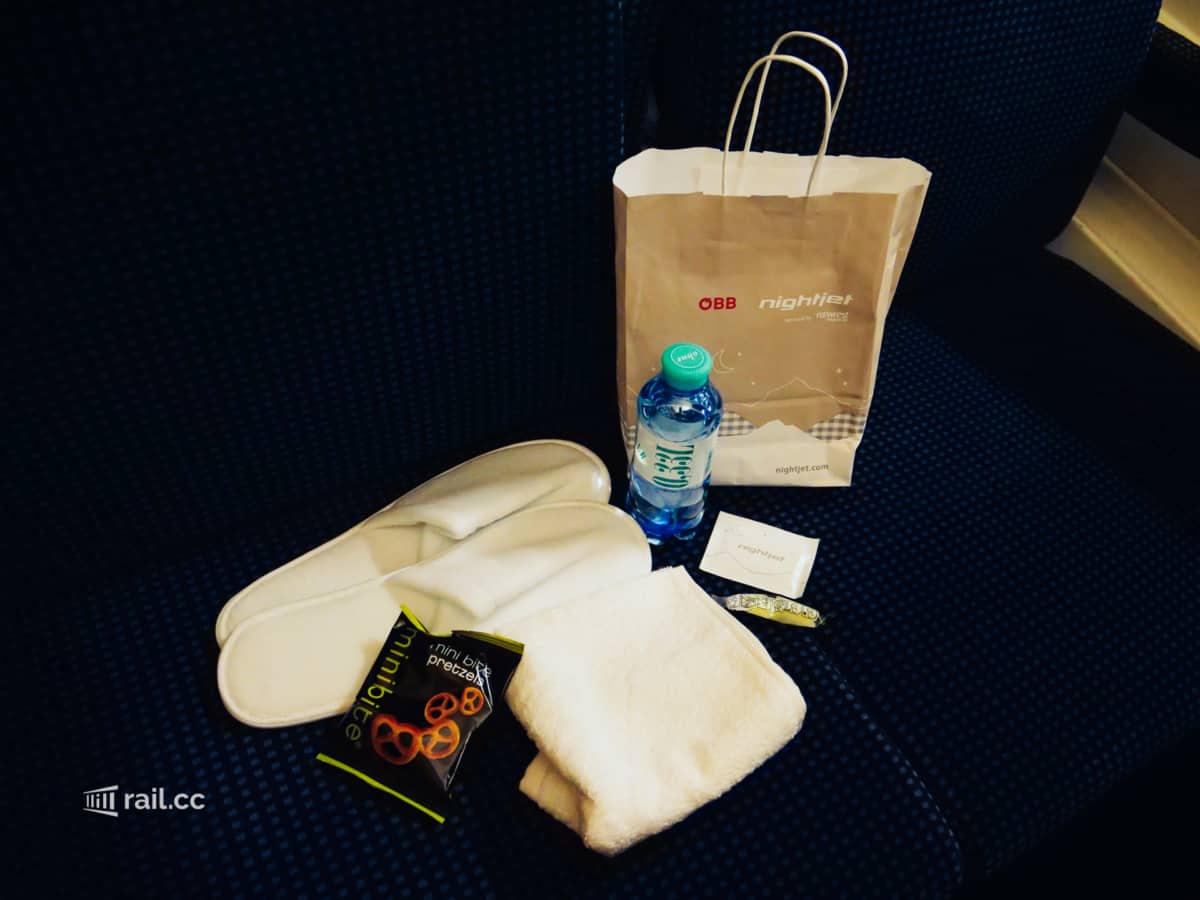 Welcome pack in the Nightjet

After leaving the eastern station, the train attendant collects my ticket, as well as the breakfast wish list. I ask her to switch my compartment from "daytime"- to "nighttime-position". Only 30 seconds later, the seats have been replaced by a bed – Amazing! I am looking forward to tonight. With a travel time of 11 hours and 20 minutes, everything is super relaxed and I have tons of time. 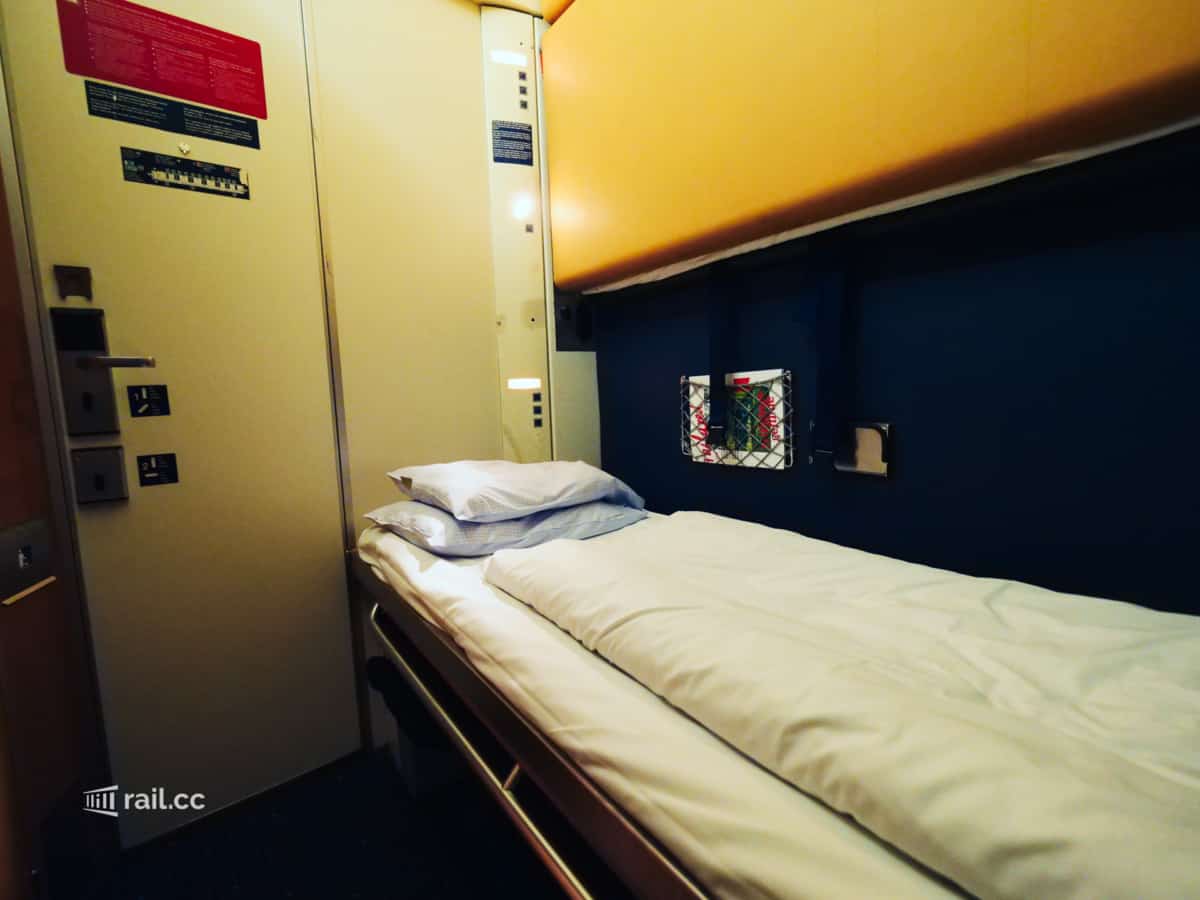 Nightjet sleeping car with a bed

Just before going to bed – Time of arrival in Vienna will be at 7am – I have my brought along dinner, as well as a shower and a short wander through my compartment.

In a separated sanitary area, you will find a toilet, a sink and a shower. The tap of the sink serves also as a shower head and you can easily swivel the basin over the toilet, away from the shower area and shower freely. Of course, it is a little tight, but with a height of 180 cm it’s totally doable. The same sleeper compartments are also available without a sanitary area. You will have your own sink, but the toilet is in the corridor and there is no shower. 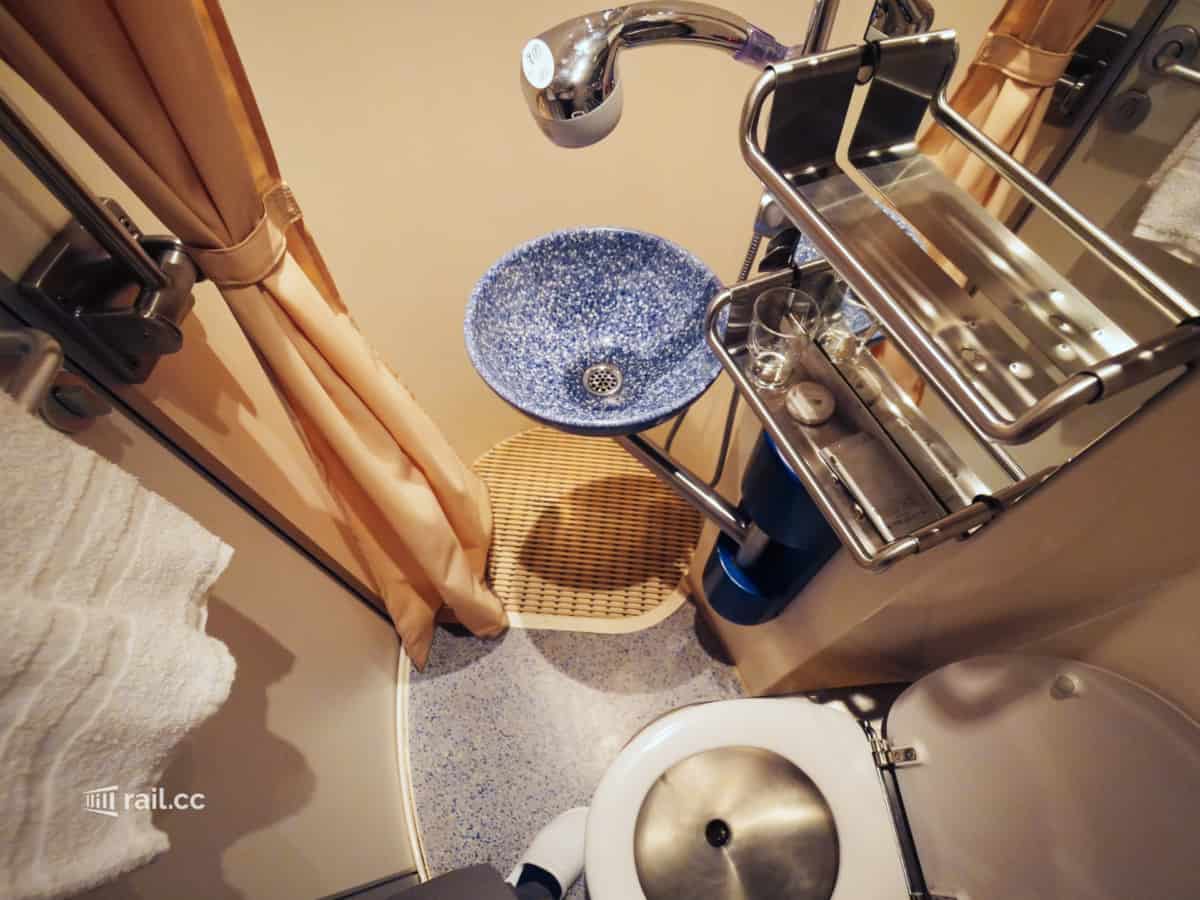 Bathroom and toilet in the night jet

I have a little wander through the compartment with its lights, a power socket (I could only find one) and a bed. There is more overhead storage space for extra luggage in the corner next to the window. 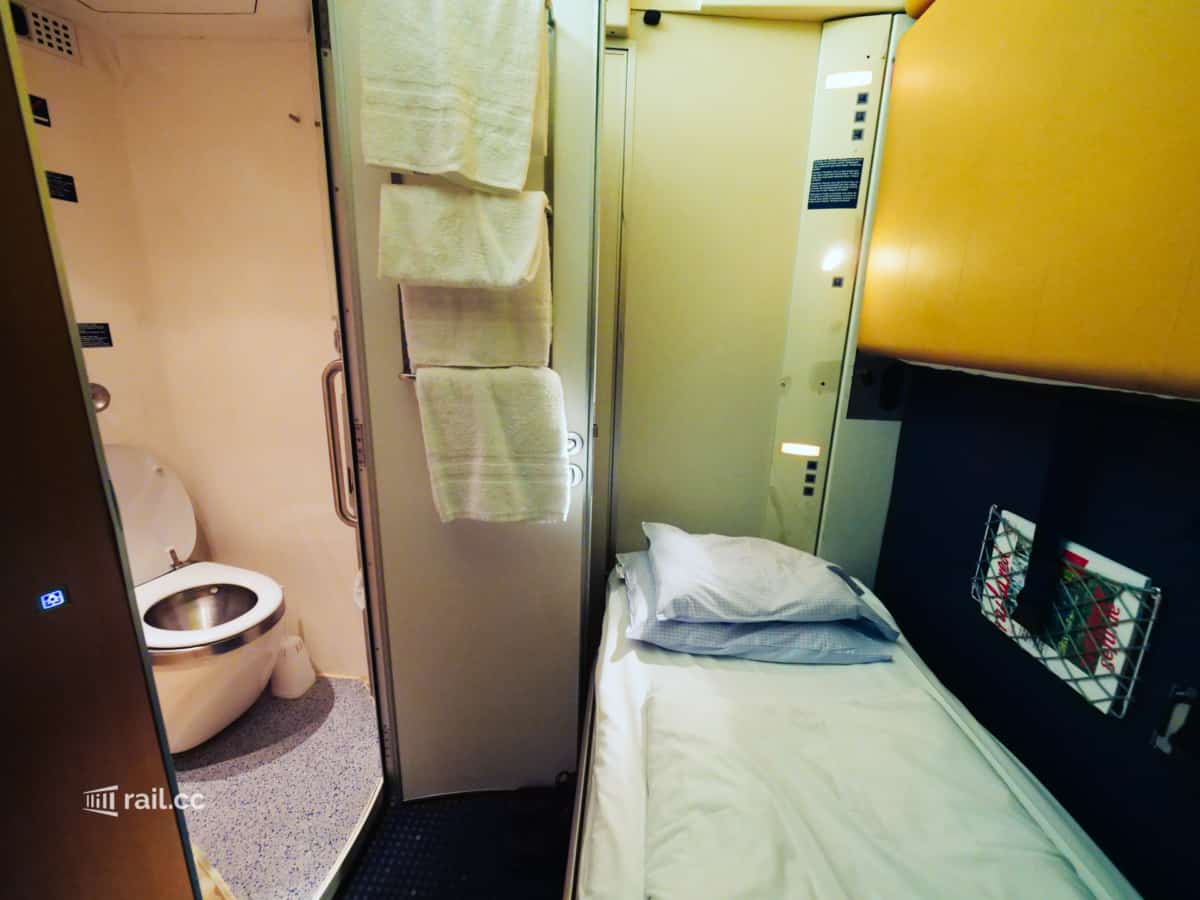 Sleeper compartment with private bath in the Nightjet

After turning off the lights, I fall into a deep sleep without interruptions. The last place I remember passing is Frankfurt an der Oder, and we head on towards Poland.


Find cheap fares for the nightjet


Suddenly it gets really bright during the night. Probably around 1am in Racibórz, when some carriages were spanned and caused a brief power cut. Got up quickly, turned off the lights – that’s it. Shortly after 4.30am there was a loud noise. We just had arrived in Breclav and there were more carriage spanning and coupling activities. But that’s what night train journeys are all about.

We head on further towards Vienna station. Promptly at 6am my breakfast arrives according to schedule from my order the night before. 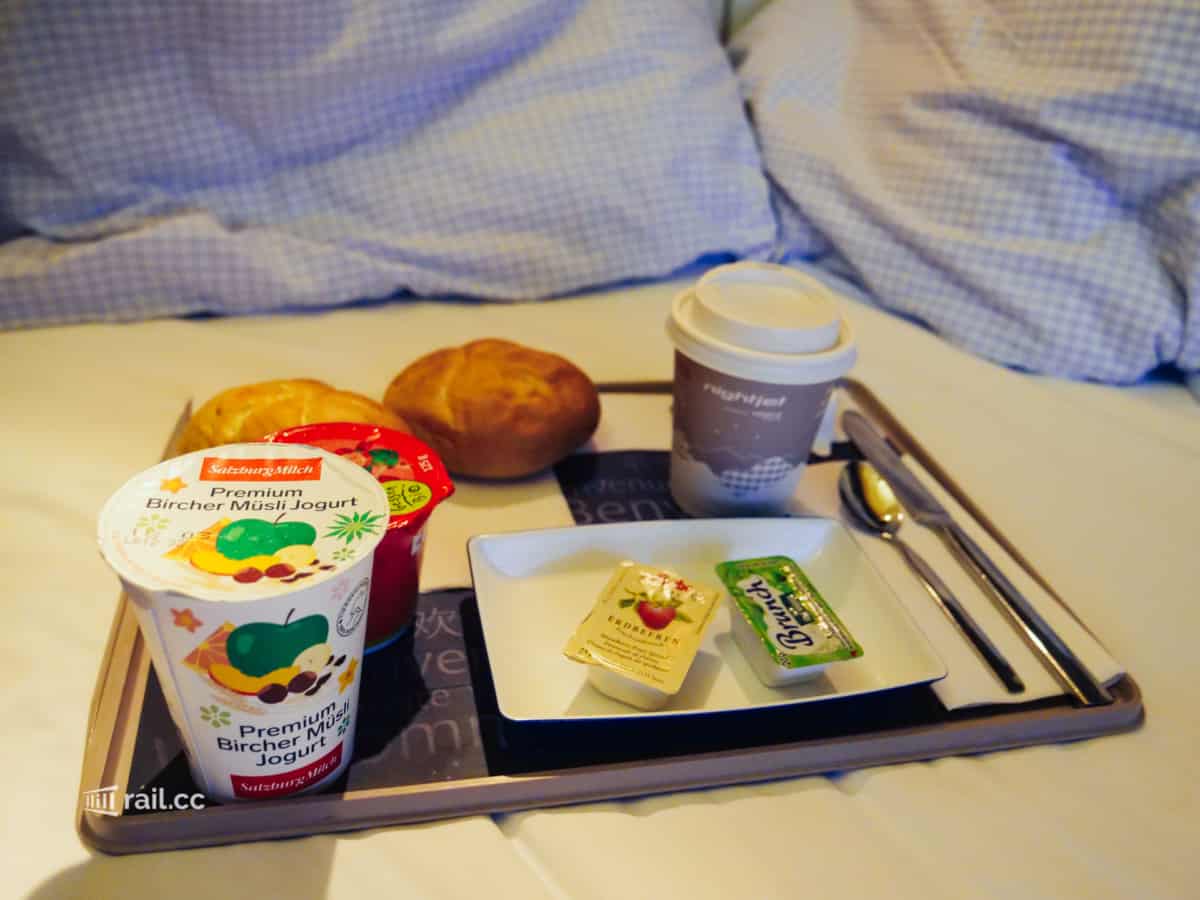 Breakfast in the Nightjet

Here a few pictures of seated carrier and couchette, which this train offers. Also, the sleeping compartment with two beds, no bathroom.


Compare fares for seats and couchette 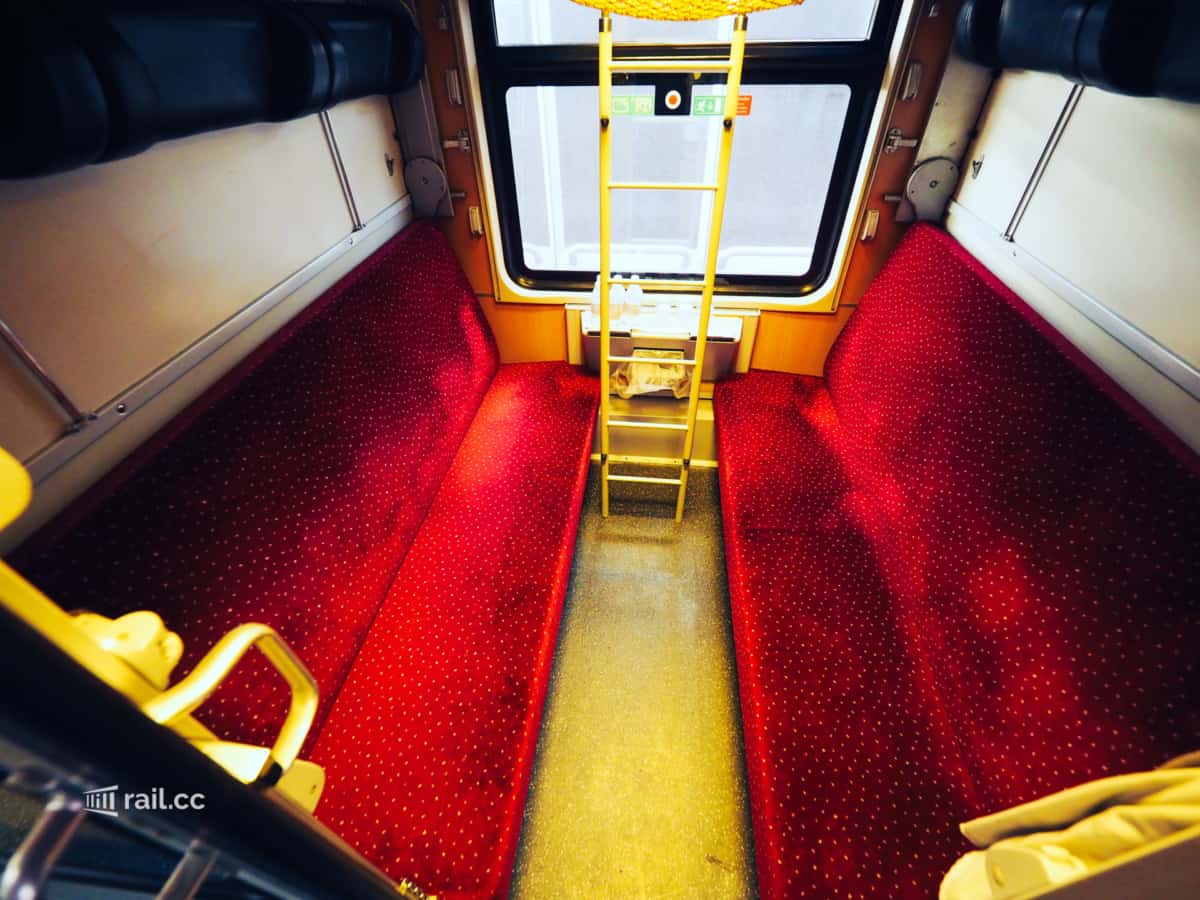 We arrive in Vienna according to schedule. The new main train station is truly excellent … I have a quick look around before I have to head on. 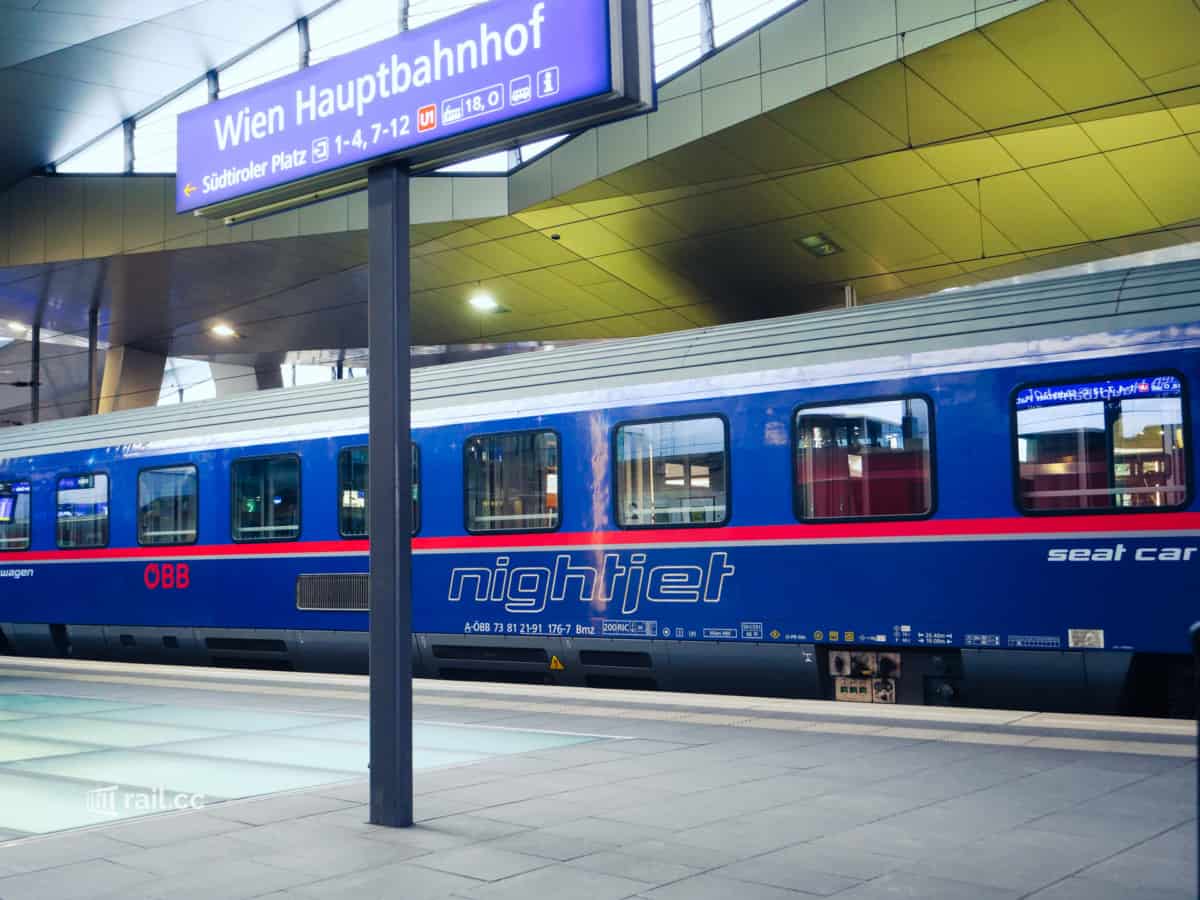 My ticket for the trip in the night train from Berlin to Vienna in the sleeper compartment with toilet and shower as a one person compartment cost me 169 Euro. At first, this might sound like quite a lot, but since the ITB trade show was on in Berlin and the hotel prices had risen a lot, it was actually an ok price. You save yourself a night in a hotel – and a lot of time, because time certainly flies by in the train ? Of course you can buy as well cheaper tickets starting from 39 Euro.

You can purchase tickets directly through Trainline. Easy and safe. Or with the ÖBB. The earlier you buy, the higher the chance of scavenging a "Sparschiene" fare.

Further categories are: The normal seat, the couchette with four or six beds and the sleeper compartment with or without shower/toilet for three, two or one person. Personally I think, that three people are definitely too many for one sleeper compartment.


Find best fares for the nightjet


Review of the journey in the Nightjet

I really enjoyed the trip, everything worked smoothly, the Nightjet was on time, the price was okay. Sure, the carriers’ best days are over, and are somewhat “charmingly romantic” here and there.? Don’t expect a luxurious journey like in the Orient Express, yet everything was clean. So I definitely recommend the trip in ÖBB’s Nightjet!

If you have any further questions, you can simply use our friendly forum to find your answers.

– In Berlin I spent the night in the Intercity Hotel near the main station. It was quiet and is located so close to the station, that everything is easily accessible. Prices can be found here.
– For a place to stay in Vienna, it’s best to check out Booking.com
– The timetable for the Nightjet 457 from Berlin to Vienna you can find here.
– And for the other direction, the timetable for the Nightjet 456 from Vienna to Berlin can be found here.
– Here is an overview of the ticket prices.
– If you travle by Interrail, you will need a reservation. The overview for Interrail reservation prices, you can find here.