With the Bayern-Ticket from Munich to Füssen

Neuschwanstein Castle is one of Germany's most visited tourist attractions. It is located in the very south of Bavaria, close to the border to Austria. Built as a retreat for King Ludwig II of Bavaria the castle is a rewarding destination in a beautiful landscape. You can easily reach Neuschwanstein with public transport. From Munich and Augsburg direct trains run to Füssen, from where you can travel to the visitor centre at the foot of the castle. Here you will find all information you need about how to travel to Neuschwanstein by train and bus. 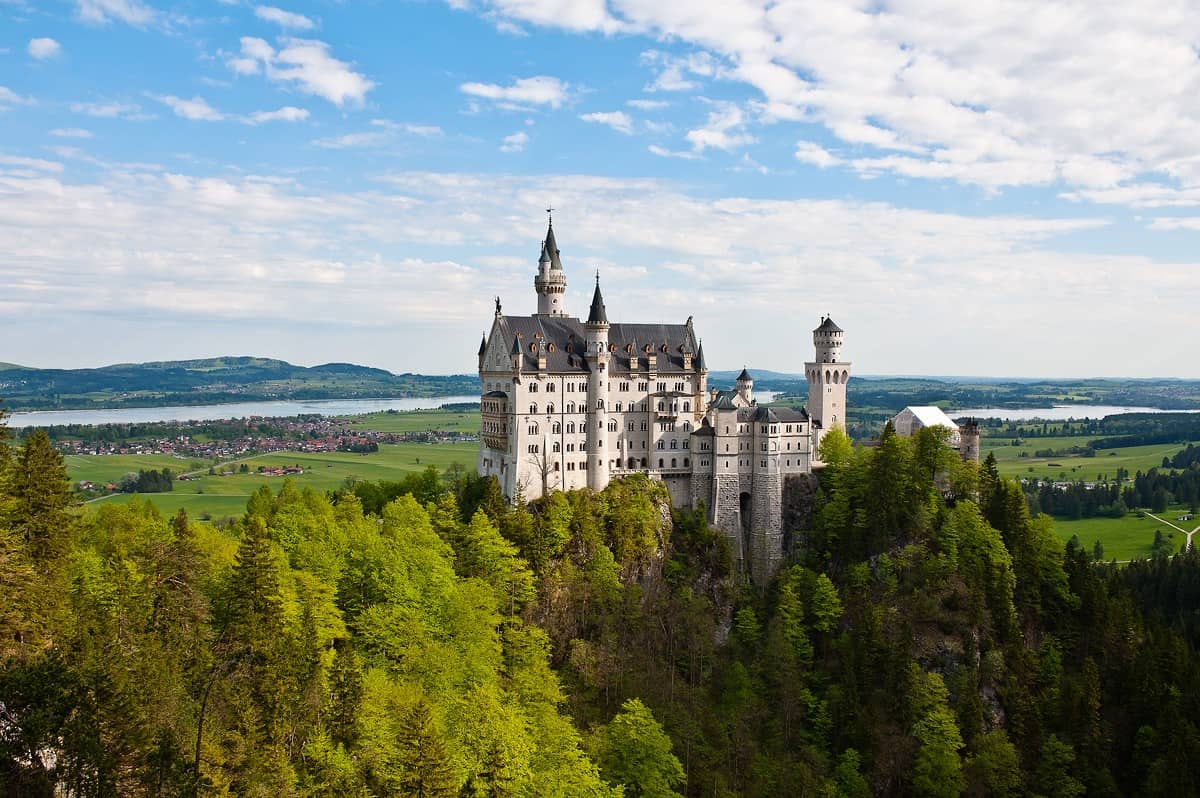 The famous view of Neuschwanstein Castle from Marienbrücke.

Munich to Füssen by Train

German Railways (DB) offer hourly connections from Munich to Füssen. Every two hours a direct train runs on the Munich-Füssen route. An additional connecting service operates every two hours as well, requiring a change of trains in Buchloe. You will find a train from Munich every hour. The trains arrive in Füssen just about two hours later. Travel times are the same for both the direct trains as well as the connections with a change of trains in Buchloe. At the central station of Munich you will find the trains departing from platforms 27 to 36. These are located outside of the main hall in the so called "Starnberg wing station". Just walk along platform 26 to reach this part of the station. Calculate with a few minutes more when changing trains here.

Detailed schedules are available from the schedule planner.

Regionalexpress train with double-deck coaches on the way from Munich to Füssen.

The direct Regional Express (RE) trains from Munich to Füssen are operated with modern, air-conditioned double-deck trains. From the upper deck you can enjoy great views of the beautiful Bavarian countryside. Especially on the last part of the trip between Biessenhofen and Füssen the railway line runs through a postcard-like scenery. Take a seat on the left-hand side and you will see Neuschwanstein Castle from the train already.

A DB Regionalbahn running through the beautiful Bavarian scenery close to Weizen-Hopferau.

We recommend two offers of DB for your trip to Füssen. The cheapest train ticket is the "Regio-Ticket Allgäu-Schwaben". It costs 20€ for one person and is valid on all regional trains (RE and RB) on this line. Up to five persons can travel with one ticket, with each additional passenger paying only 6€ extra. UPDATE: In 2019 the price for each additional passenger will be 7€. You have to enter the names of the travellers when buying the ticket. The Regio-Ticket Allgäu-Schwaben is valid only in 2nd class. Validity begins from Monday to Friday at 09:00, until 03:00 on the following day. On weekends and holidays the ticket is valid from 00:00 already, until 03:00 on the following day. You can buy the ticket online on Deutsche Bahn.


Apart from the Regio-Ticket Allgau-Schwaben you should also have a look at the Bayern-Ticket. This is also valid on public transport in Munich as well as on the buses from Füssen to Neuschwanstein. The Bayern-Ticket costs 25€ for the first traveller and 6€ for every additional traveller (up to five persons can travel with one ticket). The ticket is also available for 1st class: 37,50€ for the first traveller, 18,50€ for every additional traveller. The Bayern-Ticket is usually the ticket of choice, as it includes other public transportation as well. The ticket is valid from 09:00 on weekdays and from 00:00 on weekends and holidays and is valid until 03:00 on the following day. Of course you can also buy the Bayern-Ticket online

Füssen to Neuschwanstein by Bus

After arriving in Füssen you can either have a walk through the beautiful old town or take a bus directly to Hohenschwangau. Bus lines 73 (schedule) and 78 (schedule) depart directly in front of the train station. They bring you in just about 10 minutes to the stop Alpseestraße/Neuschwanstein. There you will find the Ticket-Center for Neuschwanstein and Hohenschwangau castles. You can buy or collect your tickets here. This is not possible at the castles itself, so don't forget to get your tickets here!

The single ticket for the bus from Füssen to the visitor centre is 2,30 Euro. If you want you can also walk, there is a signposted path along the road from Füssen to Hohenschwangau. The distance is about four kilometers, so you should calculate with about one hour to get there from the station.

Uphill to the castle

From the Ticket-Center in Hohenschwangau you will have to get uphill to Neuschwanstein Castle. There are several ways how to get there:

When we visited Neuschwanstein we chose to walk and included a visit to Marienbrücke. All paths are well-signposted, you won't get lost. From the famous Marienbrücke you have an amazing view of the castle and the Bavarian landscape. The short detour is definitely worthwile. You will find a map of all possible routes here.

The entrance fee for Neuschwanstein Castle including a guided tour costs 13€ in 2018. Children under 18 years are free, for groups there is a reduction of 1€ per person. You can visit the castle only as part of a guided tour which takes places at a set time. The number and start time of your guided tour can be chosen when buying tickets are printed on the ticket. There are several guided tours every hour so it is necessary to be on time for your tour!

Photography is forbidden inside the castles. It is also not possible to bring larger pieces of luggage (prams, backpacks, suitcases). There are some lockers at the bus station as well as at Füssen train station. If you are visiting as a day trip from Munich, leave your luggage at your accomodation. 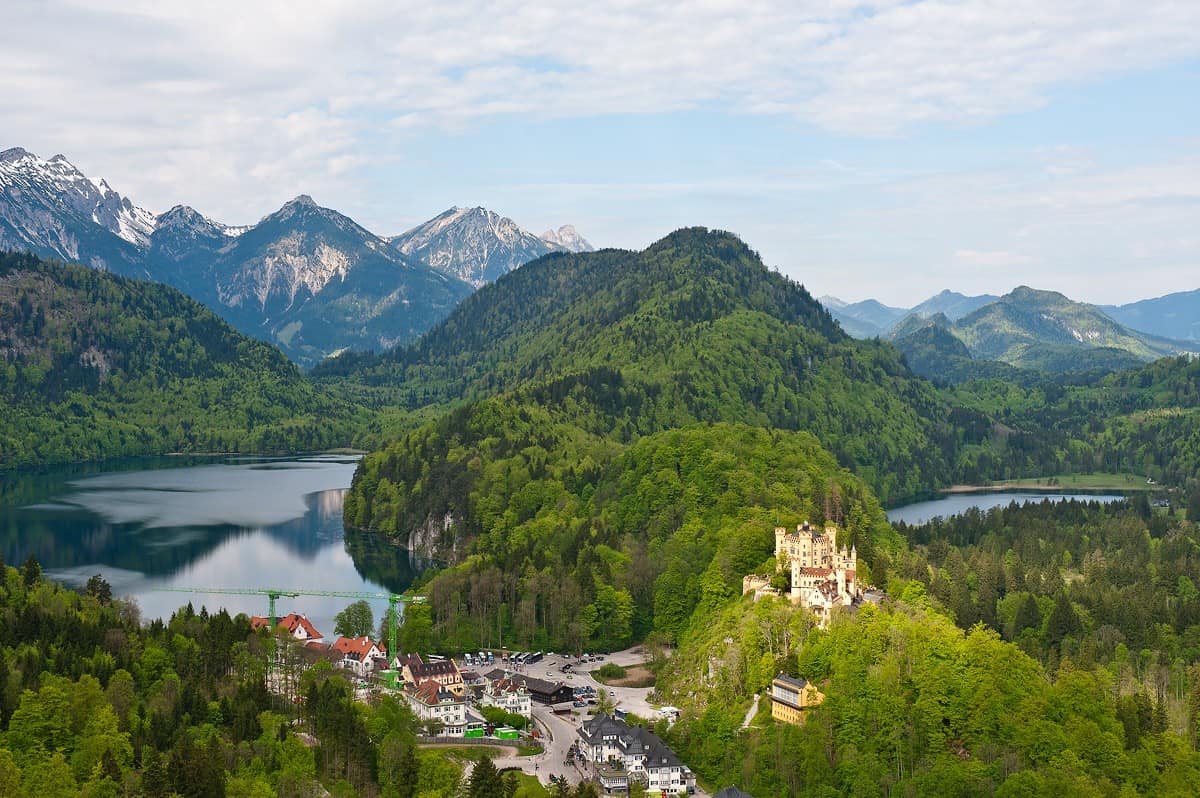 During our stay in Füssen we stayed at Maurushaus in the old town of Füssen. The hotel in a century-old building is privately run with lots of dedication of the owners. We can only recommend it. You can book it online here. More hotels are available here.

A train on the way to Füssen runs past Hopfensee with Neuschwanstein Castle in the background.

For further questions to this blog, please ask in our friendly forum.