How to travel by Eurail in Sweden. Overview and information to travel routes, Swedish train types, night trains and Eurail reservations.

Day trains: Compulsory reservation on Snabbtag trains of SJ and on Snalltaget services.
For more information about reservations in Sweden click here.

Eurail in Sweden is really comfortable in principle. The main routes connect the big cities Stockholm, Malmö and Göteborg. There are many private operators besides State Railway SJ and most of them do accept Eurail. However, you have to be careful as for instance on the line from Göteborg to Stockholm Eurail is only valid in SJ trains but not on board of MTR Express and Bla Taget.

From Stockholm several lines run to the north of the country, the most famous is Inlandsbana, running more than 1000km from Mora via Östersund to Gällivare. Also the Iron Ore line from Lulea via Gällivare to Narvik in Norway is amongst the most known and beautiful lines in Europe. Other international lines run from Stockholm and Göteborg to Oslo, from Östersund to Trondheim as well as from Malmö to Copenhagen. You can't reach Finland by train, however the bus connection from Lulea via Tornio/Haparanda to Kemi is included in Eurail.

The most important ferry connections run from Stockholm to Turku, Helsinki, Tallinn, Saint Petersburg and Riga, from Karlskrona to Gdynia, from Göteborg to Fredrikshavn, Helsingborg to Helsingor and from Malmö to Travemünde.
For more information on ferries in Sweden have a look here.

Buy your official Eurail pass via the rail.cc/eurail.com partner link. Get a free PLUS account on rail.cc. With your purchase you support all the free information on rail.cc. Thank you!

The Eurail SWEDEN Pass. Travel by train in SWEDEN. Get free help and information in our big Eurail community. Buy your official Eurail pass here.

What trains require an Eurail reservation. How to avoid expensive reservations and save money. Here you get free help and a list of all trains.

Eurail night train travel. We list all connections, fares and categories: seat, couchette, sleeper. How and where to buy night train reservations.

Do you have further questions and need assistance? Do not hesitate to ask in our friendly forum where you always get detailed help.

From Turku to Stockholm On a Ferry

A nice day between the sea and the sky

blog written by Alexander
Night Train from Stockholm to Narvik

From the airport to the city center of Stockholm

A train journey trough Sweden beside the beaten paths

Travel to the Far North.

blog written by Flo
From Kemi to Luleå by Bus

If there is no train connection, the bus will make do. 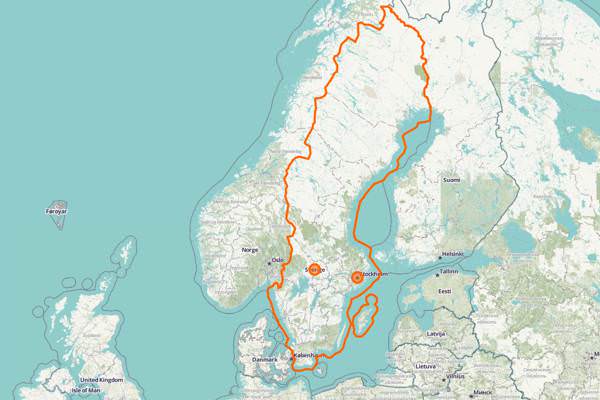