From one metropolis to another in four hours

The train called Sapsan is one of the fastest on the route between the official capital of Russia and its so-called Northern capital. That is why it is popular in cases of business trips and amongst those who values their time more than abstract travel impressions.

My trip starts at the Leningradsky railway station. It was completely renovated in 2013, and now its classical facade hides modern spacious halls. 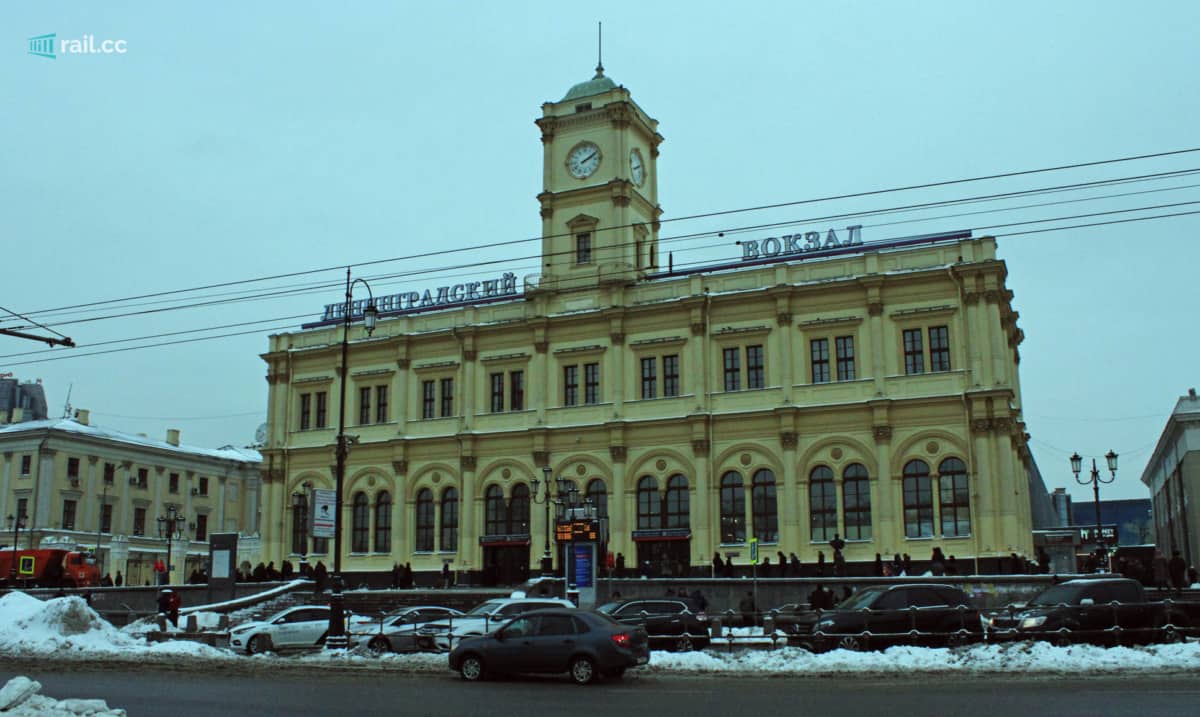 The main entrance is on the side of Komsomolskaya square, popularly known as The Square of Three Stations (two other railway terminals are also located here: Yaroslavsky and Kazansky). Mind the traditional Russian security check: there are metal detectors and introscopes behind the doors. Those devices are essential for creating queues and good for taking a couple of minutes from your life away 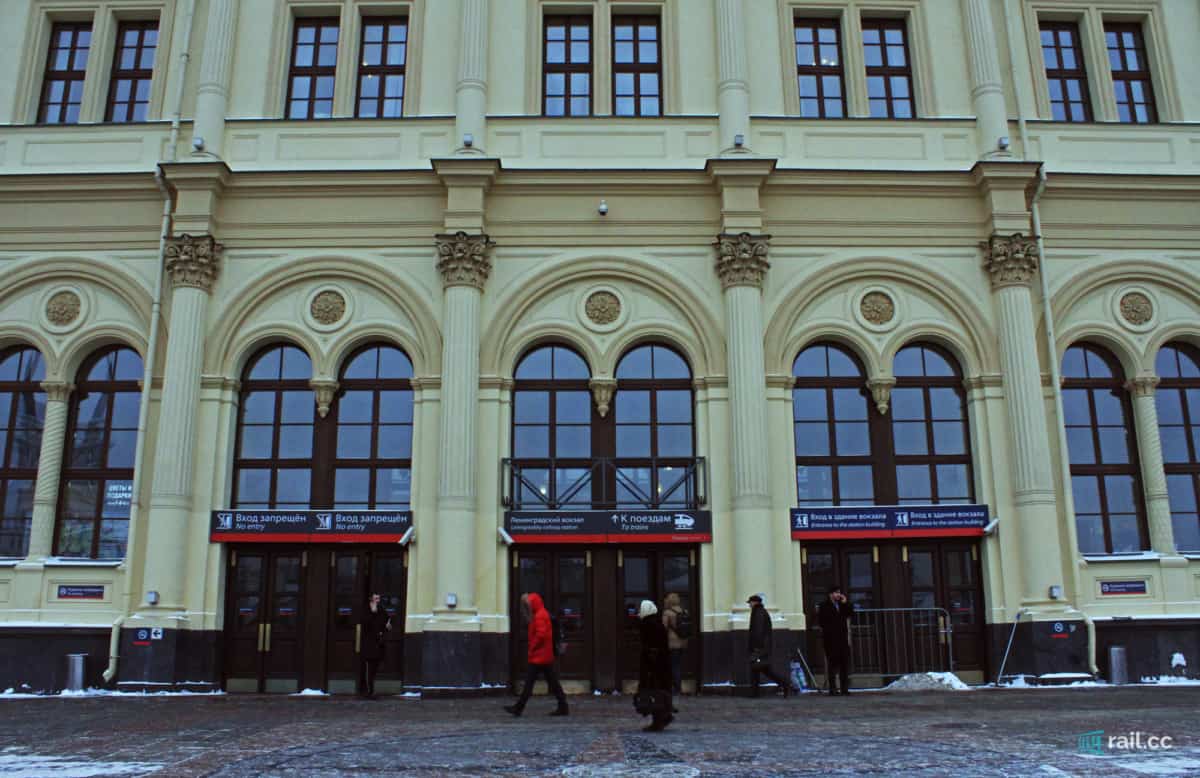 The central waiting hall has several levels. The first of them is mostly occupied by various small shops, the upper ones are the places for restaurants and cafes. There are a relatively big number of benches for waiting passengers located on different floors.

The information on the panel switches between three languages: Russian, English and Chinese. The latter was added a few years ago, which gives us some idea about tourist dynamics in the region. 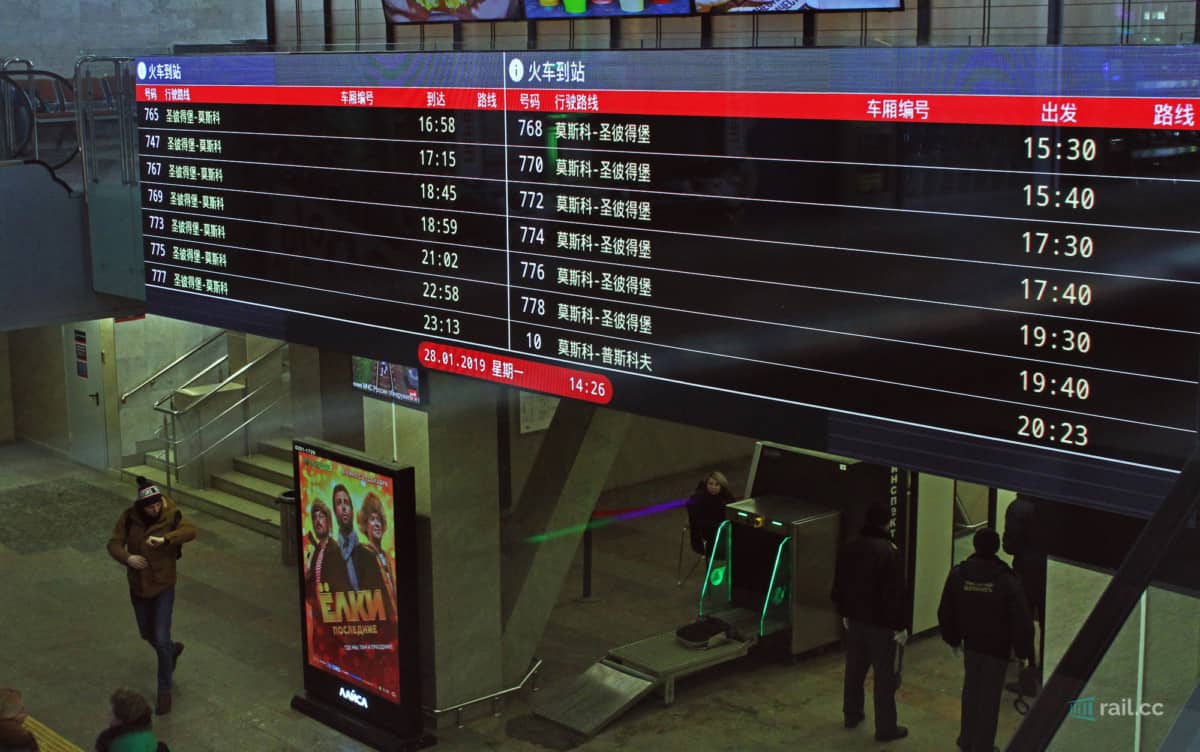 The train is on the track 9 and is ready for boarding pretty early, 45 minutes before its departure. However, there are a lot of people already - Sapsan is for punctual and concentrated persons.

The name of the train is the Russian word for Peregrine falcon, the fastest raptor in the world. This is understandable for a high-speed vehicle, but Russian Railways have a kind of tendency to give bird names to their trains - there are also Lastochka (swallow), Strizh (swift) and Ivolga (oriole).

As is usual in Russia, ticket and ID control happens at the entrance of a car. Conductors in dark blue uniform are here to help you with this procedure. My ticket has the so-called electronic registration (the option is included by RZD, in most cases by default, and allows you to avoid any printing). This is convenient: the only thing I need to get inside the train is my passport.

A regular train gets from Moscow to Saint Petersburg in about eight hours. Sapsan makes it two times faster: the duration of its ride varies from three and a half to approximately four hours, depending on the time of departure and the number of stops. 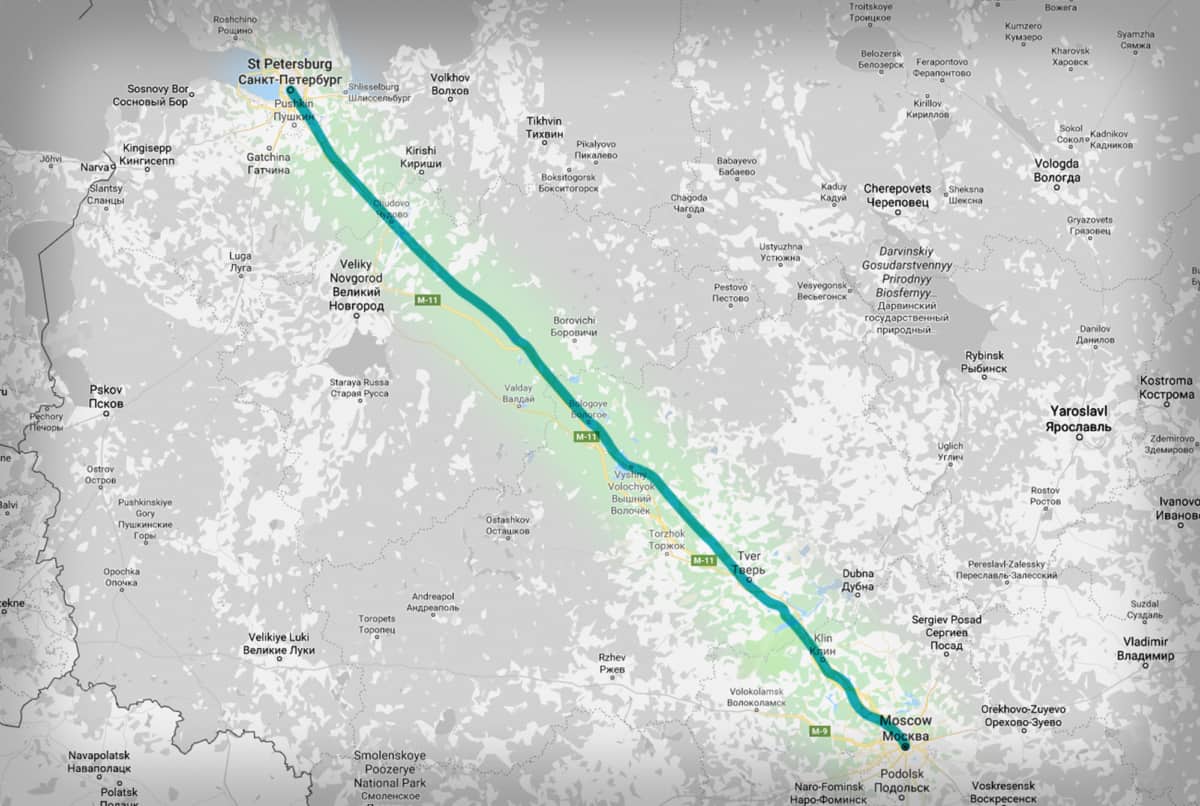 There are 14 direct runs of Sapsan in each of the directions between two Russian metropolises every day. The earliest of the trains makes no pauses in its movement at all. I ride the one (departs at 15:30) which stays a bit at two stations. The maximum number of stops for Sapsan on this route is five. All of them are just one minute long each. This train definitely prefers to get everything done as fast as possible!

The stopovers in my case are Bologoye and Chudovo. I am occupied with taking pictures of the interior and fail to even notice the latter (it is not that hard to miss a stop of such duration). Yet I managed to say my quick hello to a freight train with tank wagons at the first of the stations.

Bologoe is a small town which is considered by many to be the exact center of the route (this is not far from the truth and comes from a well-known Soviet song with the words "Bologoe, Bologoe, Bologoe… This is somewhere between Leningrad and Moscow"). The sunset starts about the time when the train with me on board passes this place. It gets dark outside pretty quickly. Well, let’s concentrate on what is inside.

Inside the train: Sapsan

There are various types of cars in Sapsan. The first class has seats of enormous size and a lot of free space. I take a look on this extravagance from the street, through the window - god forbid me from bothering some really important person! 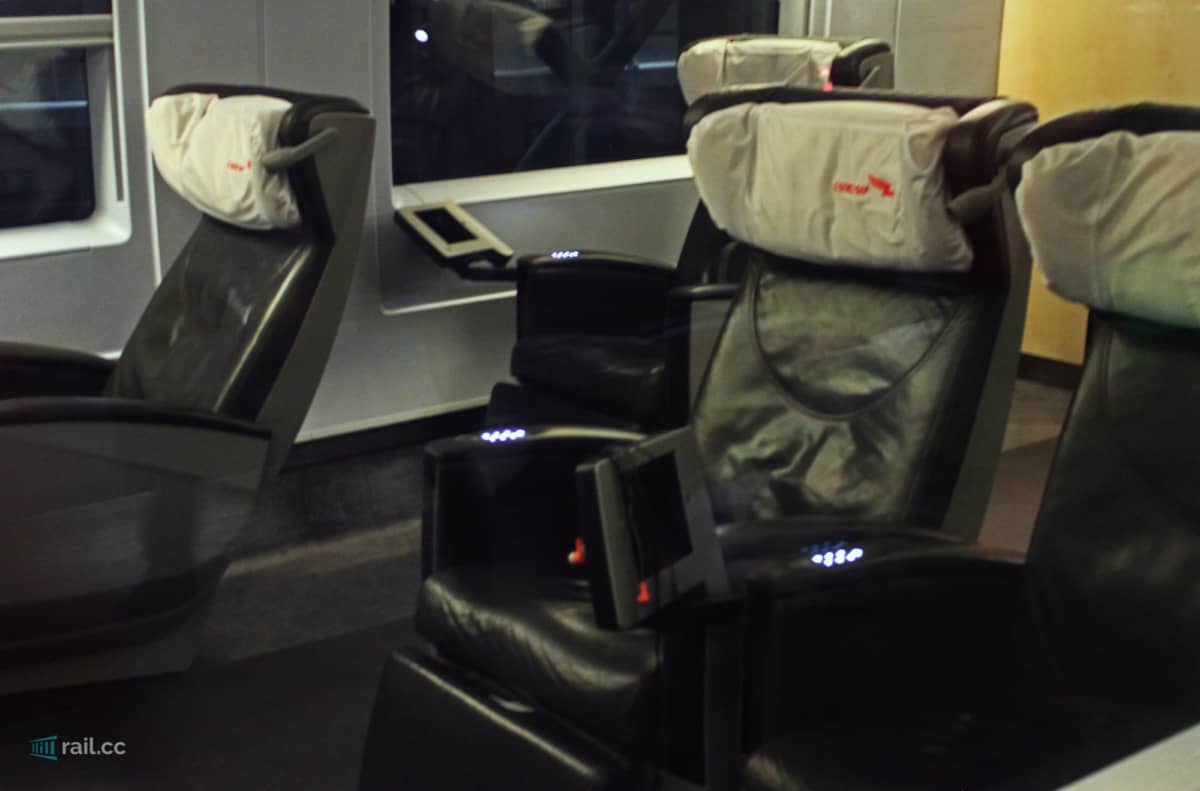 Economy class is way more modest, social and, as for me, pleasant. The chairs in this car are comfortable enough. They are positioned in rows of four, with an aisle in the center. There are also a couple of big tables, and it’s possible to choose a seat near one of them in the process of ticket booking. 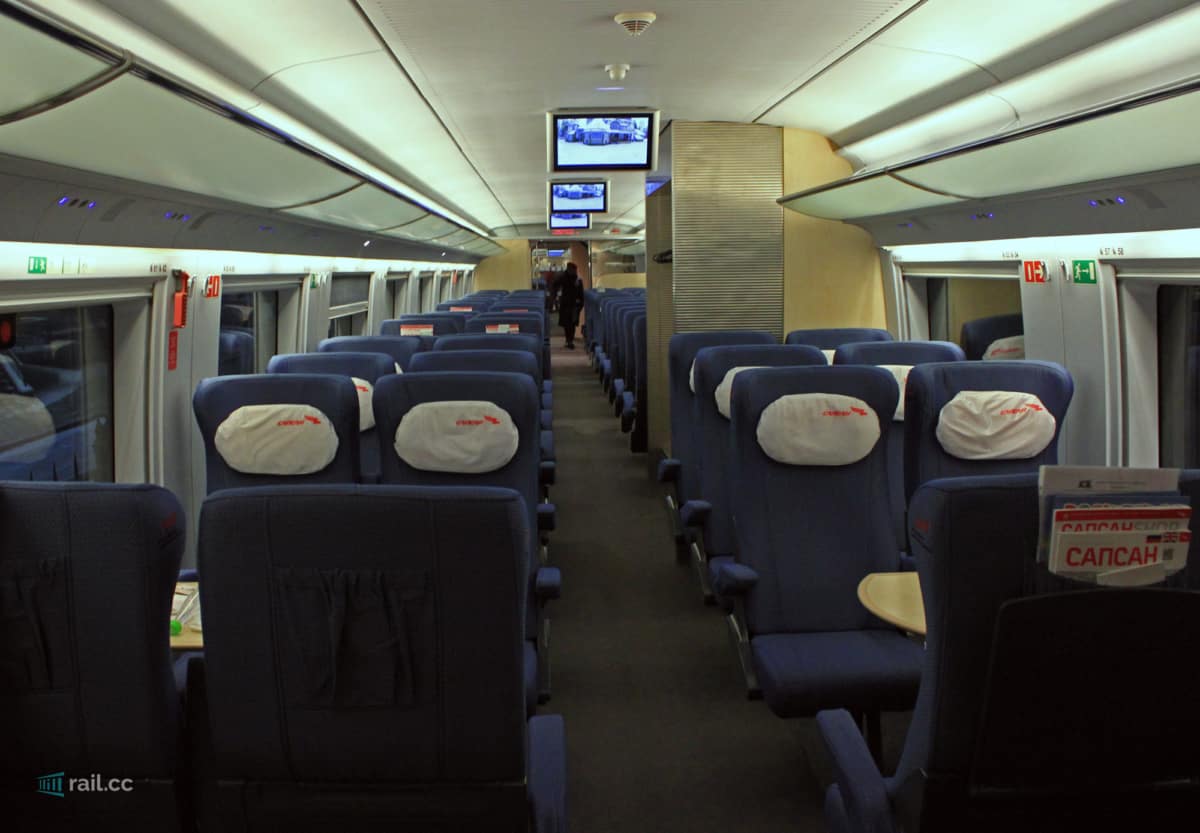 My place is in a business class car. The only visible difference between this one and the economy class is a material of seat upholstery. There is a textile, and I’ve got something leatherish here. 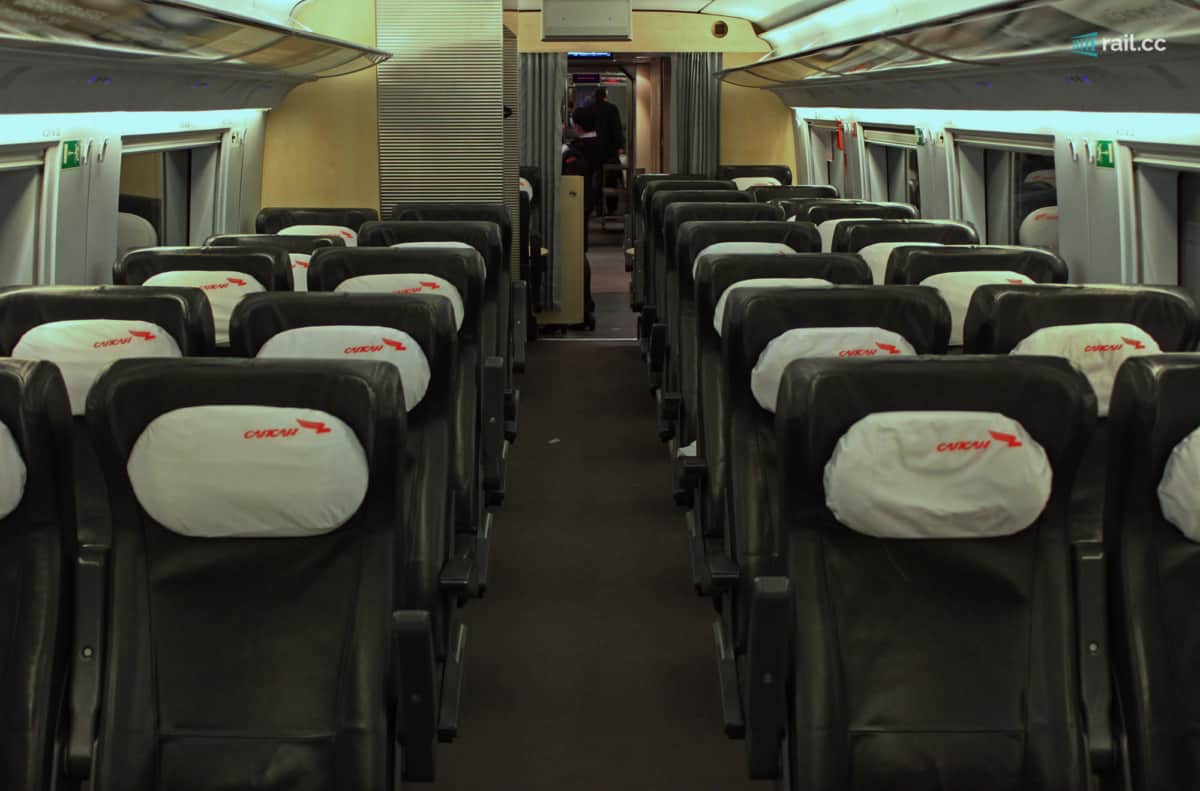 The distinction that is less obvious relates to a range of services. For example, this car offers its passengers a hot meal (you can get meat, or fish, or vegetarian dinner), various drinks (including wine - not bad for a business-oriented place, right?) and a dessert with a cup of coffee or tea. There is a group of delegates of some scientific conference in one car with me, and looks like all of them are choosing wine. What can I say? That’s a smart choice, especially given that drinks and meals are included in the price of the tickets. 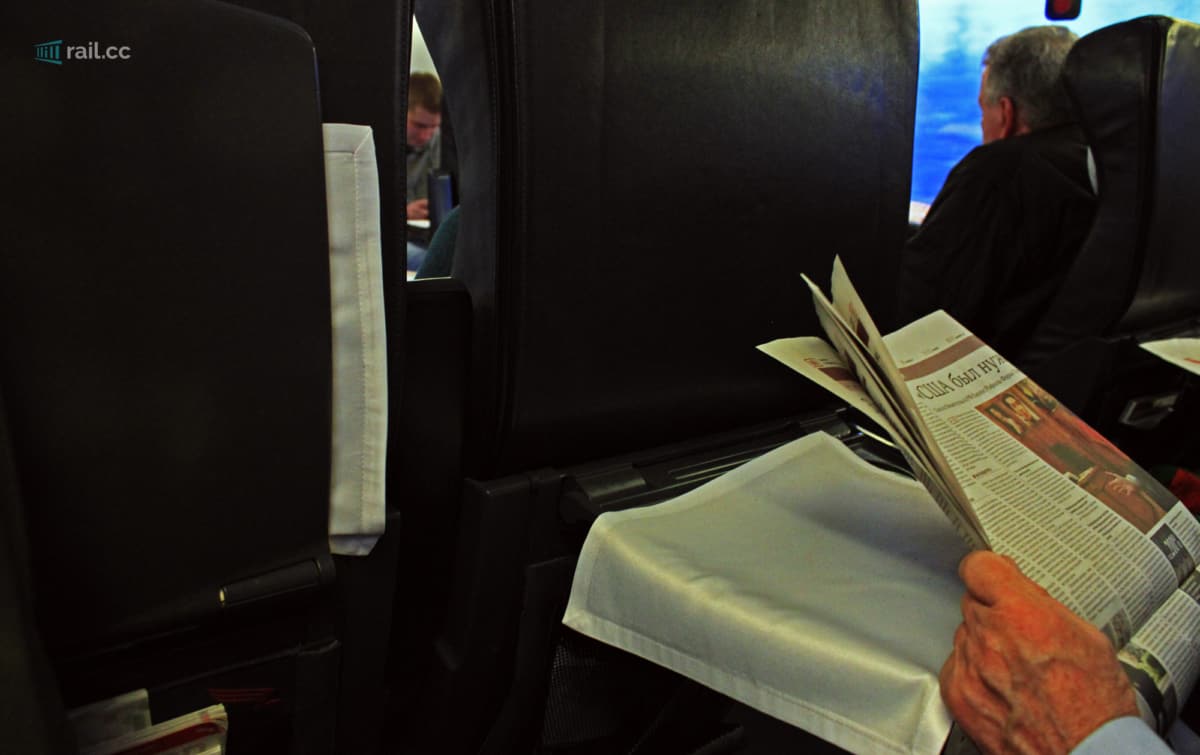 As my grandfather used to say to me when I was a kid, "Vor dem Essen, Händewaschen nicht vergessen" (Before eating, do not forget to wash your hands). I still follow this simple rule and pay my short hand-washing visit to a lavatory. It is located at the end of the car and suits my need perfectly. 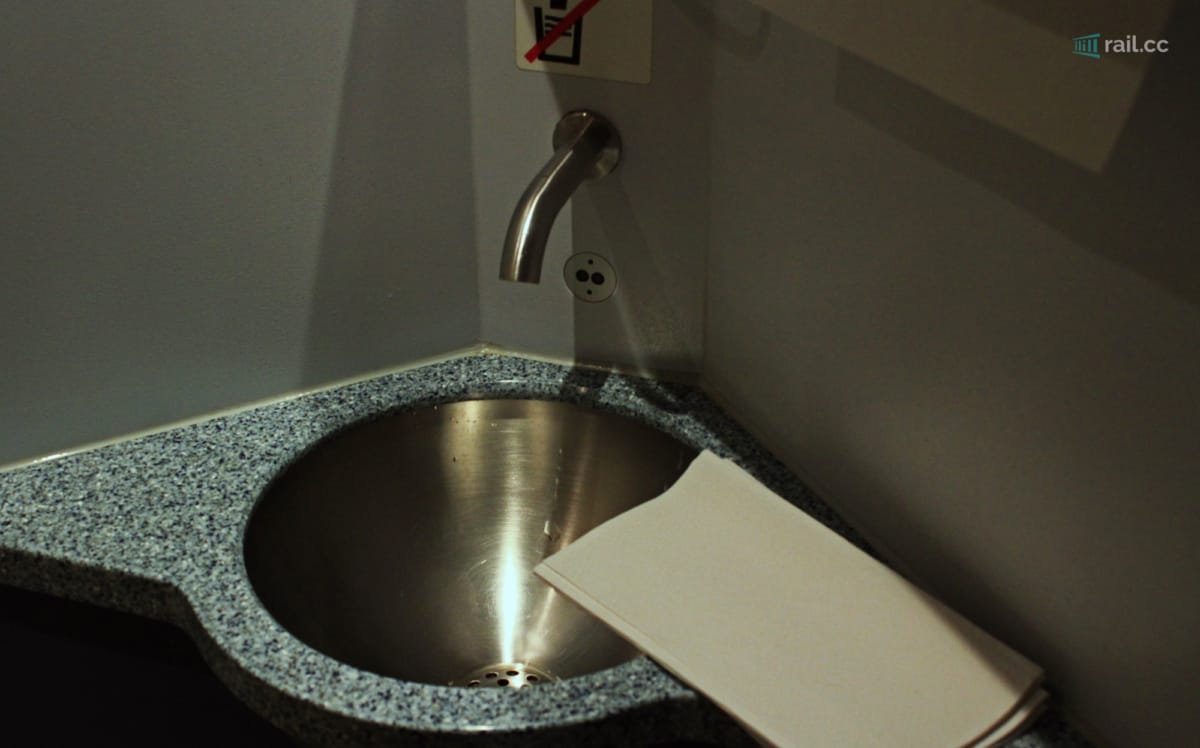 Speaking of the end of the car, there is another useful space - a luggage storage. It’s totally stuffed with suitcases and other things, which is not surprising for a crowded train on a popular route. 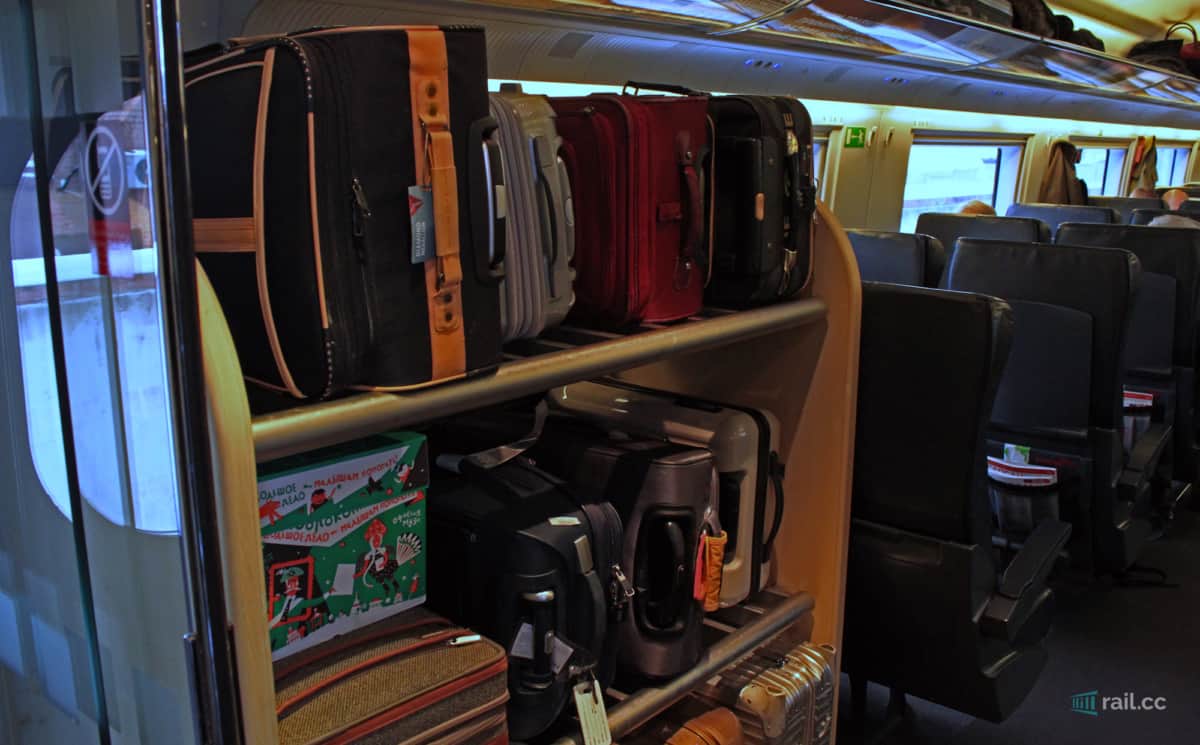 But back to my seat with a lucky number 13. What else is here? A tray table, a socket, a tiny personal lamp, a footrest, and a pile of reading materials with the Sapsan magazine on top.

There are also accessory sets, elegantly stuck between the seats. Each of them, apart from everything else, includes a survival kit of a tired person: a sleeping mask and earplugs.

I am not tired at all and about to visit a train car of another class - a restaurant. The bistro car, as it is called in Sapsan, apart from being a place which you can visit when hungry or thirsty, offers passenger seats. It is possible to book a place in this very car and spend the whole trip here.

Overview of all fares 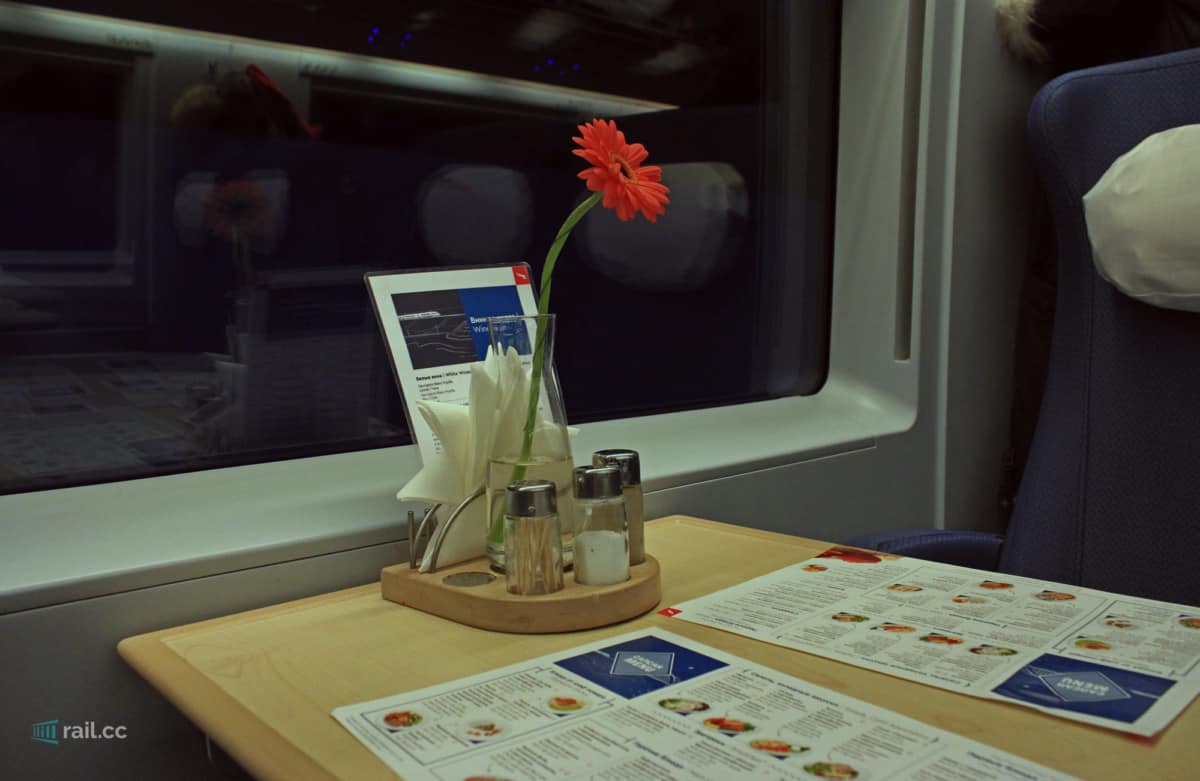 The ticket in the bistro car includes a deposit of 2000 roubles (about 27 Euro) which can be spent on foods and drinks. And there is no need to walk through the train. Just take your seat and start ordering food. Isn’t this a maximal gastronomic comfort you can find on a high-speed train?

This is the only car in Sapsan where the overall businesslike atmosphere melts away. It is more hedonistic and joyful, and this feeling is supported by train store staff who offers everybody to buy some toys. So, in case you are in an urgent need for a singing puppy or a pink dinosaur, Sapsan get this covered. 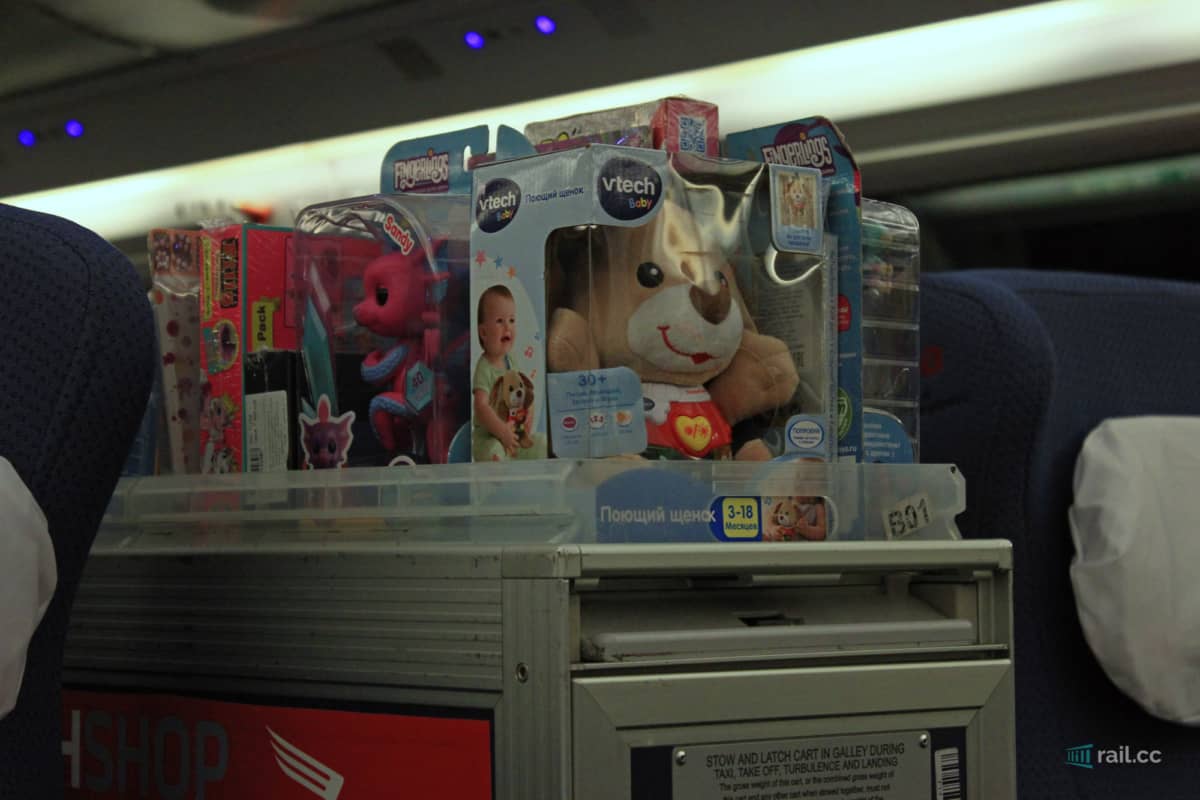 By the way, you can purchase toys - as well as meals and whatever they have here - via internet. Sapsan offers free Wi-Fi (authorization asks to type a number of digits, but it’s not a great bother), which includes access to digital shop and the thing called RZD Media Center. The latter contains music, audiobooks and other kinds of content that you can consume using your mobile device. I fail to check out this option, because all of a sudden - as it usually happens with fast trains - Sapsan arrives to its destination point.

It’s 19:16. I am at the Moskovsky railway station, which is located in the central part of Saint Petersburg. The main avenue of the city, legendary Nevsky prospect, is at a walking distance from here. And the only exit is through the station building. 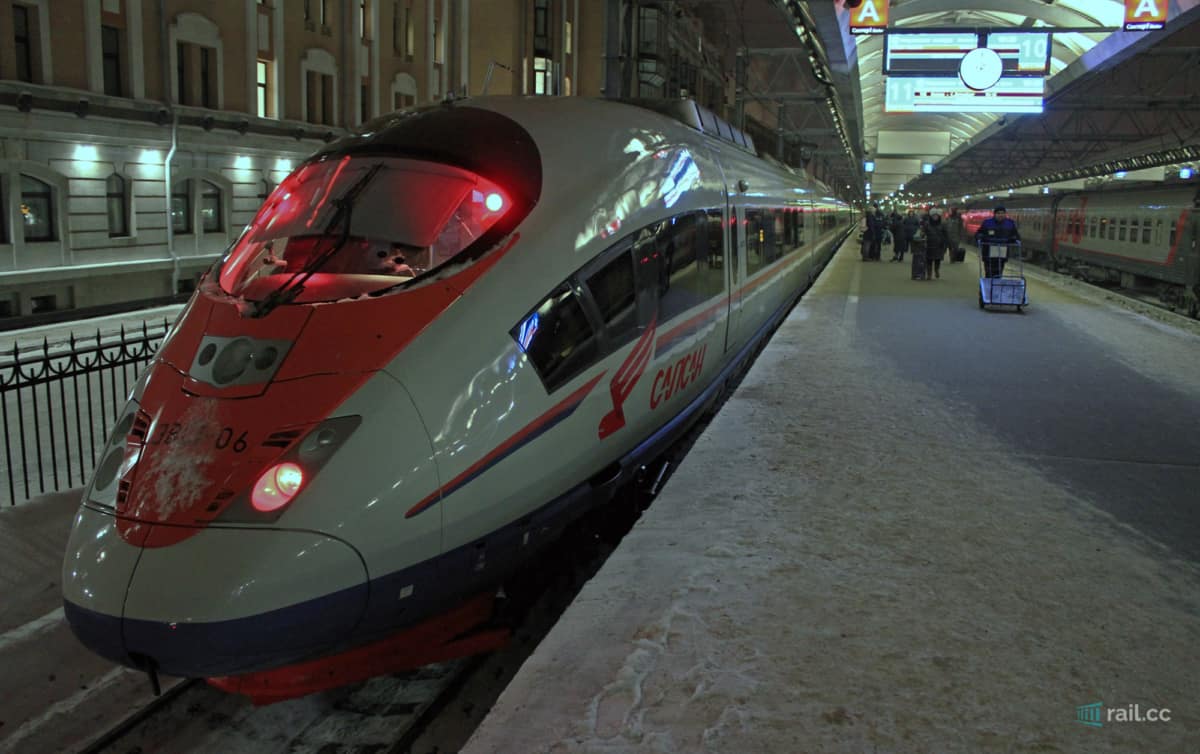 Interestingly, the Leningradsky railway station of Moscow (where the trip on Sapsan starts) and this one in Saint Petersburg have almost identical facades. Despite this fact, the stations completely differs inside. 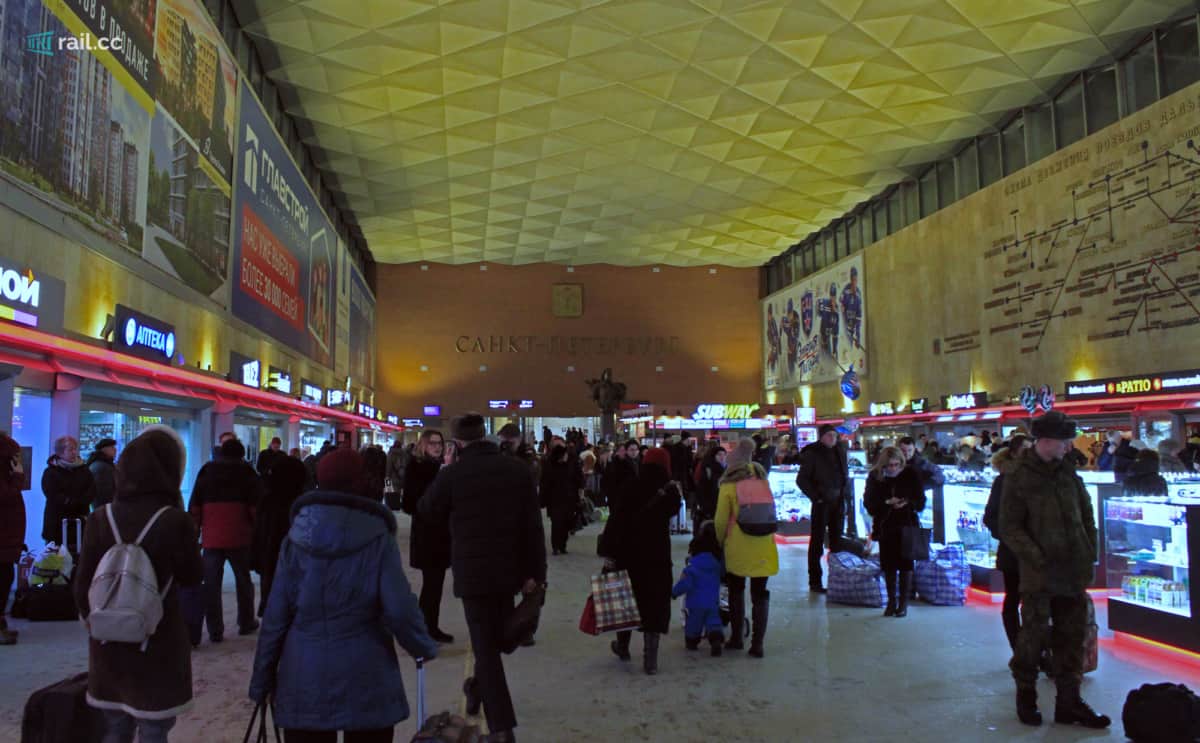 The main waiting hall of the Moskovsky railway station is not really designed for waiting - this is a huge space without easily visible seats. But, in fairness, there are some things of exceptional usefulness, e. g. humongous advertisement panels, the floor-to-ceiling out-of date route map, and the bust of Peter the First who looks severely at arriving and departing passengers.

However, the rigor of the founder of Saint Petersburg can’t affect my pleasure from the trip. Well, that wasn’t an exceptional experience, but Sapsan fulfil a specific function - it helps you to get from one great city to another in the shortest time. Both Moscow and Saint Petersburg, beyond all doubt, worth visiting, and in case you need to travel between them I recommend exactly this train.

Where to buy your ticket

Keep in mind that the closer it gets to the trip, the higher the ticket prices get (this scheme is known as dynamic pricing). Best of luck!