Interrail reservation for TGV in France

Where to get them and how much do they cost?

The TGV (train à grande vitesse) high speed trains are the flagship trains of French Railways SNCF. They operate all around France with speeds of up to 320 km/h. TGV trains also run from France to all neighbouring countries. The super-fast trains are a good way to quickly travel across France. However, if you are travelling with an Interrail or Eurail pass you will need an extra reservation to travel on board a TGV. Read here where to buy these Interrail and Eurail reservations, how much they cost and how you can avoid them.


Different types of TGV which require an Interrail and Eurail reservation

Basically, you have to make a difference between TGV trains on routes within France and on international routes. There are TGV trains operating from France to all neighbouring countries, most of them are known under a specific brand name. Depending on where you want to go, different reservation prices might apply. You will also find the reservation information for all countries of Europe on the railcc website.


TGV between France and Belgium

These TGV run from cities all over France (except Paris) to Brussels. For instance you will find direct TGV connections from Bordeaux, Marseille and Strasbourg to the Belgian capital. The reservations are quite expensive and cost 20 Euro in 2nd class and 30 Euro in first class. From Paris, the Thalys trains run every half hour to Brussels. More about Thalys here and in our blog.

TGV between France and Luxembourg

The TGV connect Luxembourg with Paris as well as with Strasbourg, Lyon and the south of France. Reservations for these services are rather cheap and only cost 6 Euro in 2nd and 1st class.

TGV Alleo between France and Germany

TGV Lyria between France and Switzerland

The TGV Lyria run from Paris via Basel to Bern and Zurich and on another route to Geneve and Lausanne. There are even some trains from Nice, Montpellier and Marseille to Geneve. The reservation prices for these trains depend on the route. They can vary from 16 Euro to 26 Euro in 2nd class and from 26 Euro to 57 Euro in 1st class.

TGV between France and Italy

Formerly known as TGV Artesia, these trains run from Paris via Lyon to Turin and Milan. Unfortunately, the reservation fee is really expensive: 31 Euro in 2nd class and 45 Euro in 1st class.

TGV Elipsos between France and Spain

The TGV high speed trains also run from Paris to Barcelona. Additionally the Spanish high speed trains AVE Elipsos operate from Toulouse, Lyon and Marseille to Barcelona and Madrid. Reservations for these trains cost up to 34 Euro in 2nd class and up to 48 Euro in 1st class, depending on the route.

Where to buy an Interrail or Eurail reservation for the TGV

Interrail or Eurail reservations for domestic TGV trains within France can easily be bought online from the SNCF website. Select the tab "seat reservation" and fill the form bellow. Then you will be shown the Interrail and Eurail passholder fare. You will receive the reservation as an e-ticket for printing or showing on a mobile device. Printing is also possible at a station at the counter or vending machines. This also works for TGV to Italy but unfortunately it doesn't for the other international connections.

International Interrail or Eurail TGV reservation are not available online, you have to go to a station and buy it from a ticket desk. This is usually possible in the countries where your train operates. In addition you can buy TGV reservations also from stations in other countries. For instance it is possible to buy a TGV reservation from Paris to Barcelona at a railway station in Austria or Germany. The availability differs from country to country though.

How to avoid Interrail and Eurail TGV reservations

Within France, instead of using the TGV, you can travel well with regional trains or intercity trains. The regional trains TER (= train express regional) often travel on long distances between large cities and are slower than the TGV, but can be used without a reservation. In this blog you can read about the differences between TGV and TER on the route from Paris to Lyon and Marseille. Here are a few tips on how to avoid the TGVs on the way to/from France:


France - Belgium: Instead of going to Brussels, travel to Lille which is close to the border. From there, you can take Intercity trains to Belgium which you can use without a reservation.

France - Luxembourg: if you want to avoid the TGV, you can take a regional train from Metz to Luxembourg.

France - Germany: there are several regional trains crossing the border between France and Germany. The most important service is the regional train from Strasbourg to Offenburg. From Offenburg there are direct trains to cities such as Cologne, Berlin or Hamburg.

France - Switzerland: The most important border crossings are in Basel and Geneva. From here you can take the TGV Lyria, which requires expensive reservations. To avoid them, you can take a regional train across the border to France and then use an intra-French TGV, which is not as expensive as the TGV Lyria. From Basel you have to take a regional train to Mulhouse, Colmar or Strasbourg to connect to a TGV. From Geneva you usually have to go to Lyon to have access to TGVs in all parts of France.

France - Italy: this is the toughest one, as there are no international regional trains on the route of the Paris to Milan TGV. However, you can use the border crossings further south along the Cote d'Azur or travel through Switzerland. Read about travelling from Nice to Turin and Milan through the Alps here and about travelling from Marseille and Nice to Milan along the coast here.

France - Spain: The TGV and AVE high-speed trains travel on their own route from France to Spain. In addition, there are three other border crossings where you can cross the border with regional trains without reservation: Hendaye/Irun in the west on the Atlantic - you should travel here if you want to San Sebastian, Bilbao or on to Portugal; Latour de Carol in the Pyrenees - here begins the Little Yellow Train and you can get there by night train from Paris and continue by regional train to Barcelona; Finally there is Cerbere/Portbou on the Mediterranean coast. More in the blog.

Here is a map to easier understand what I explained above. 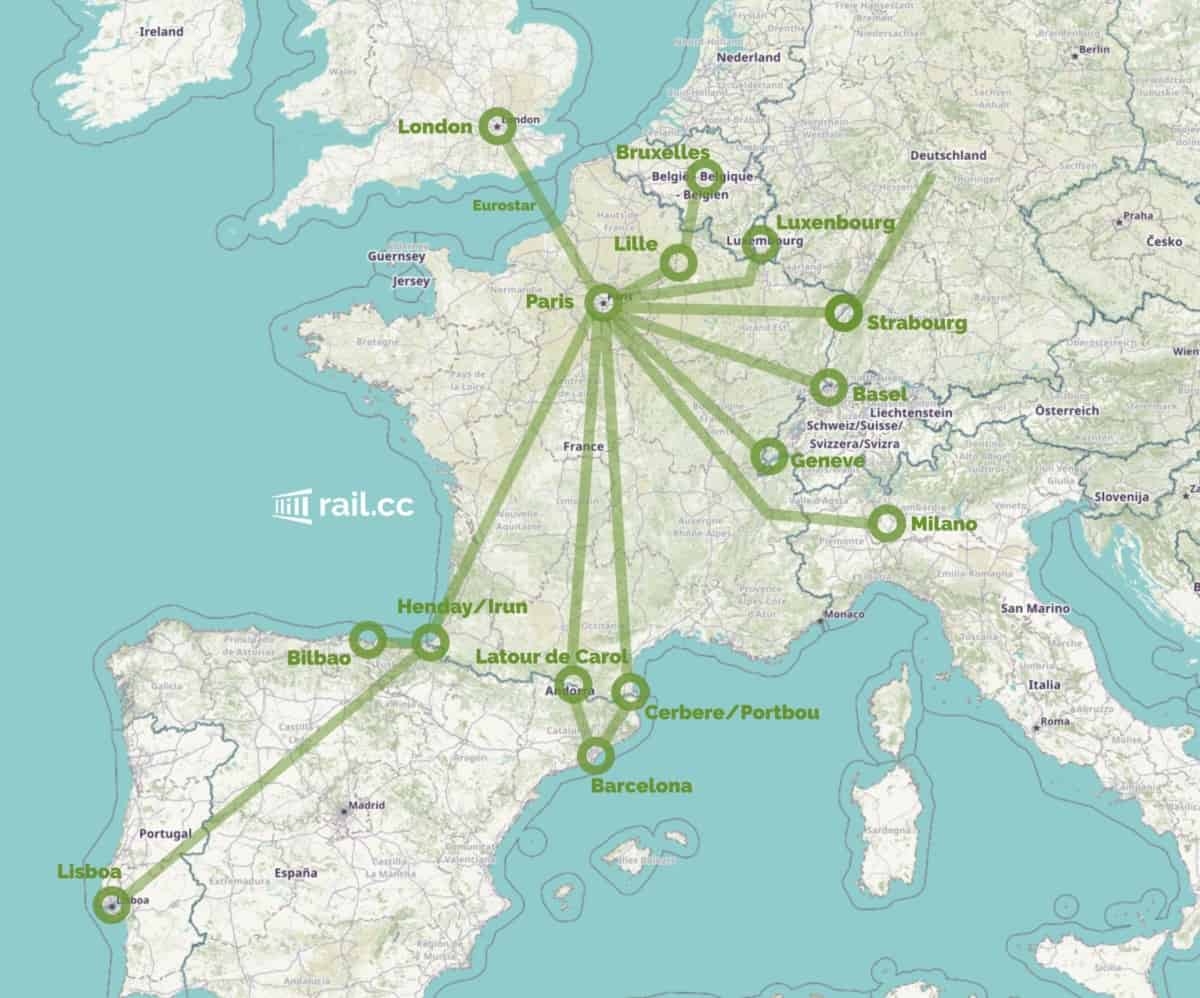 Support our work and buy your Interrail Pass on our partner link - thank you! We are official partners: you pay the same price and also get individual tips and tricks from us for your Interrail tour! ?

More tips for your Interrail and Eurail tour can be found directly on rail.cc. Do you have more questions on these topic you can reach us directly here in the blog and in the rail.cc forum.