From Bucharest and Sofia to Istanbul by Train

Istanbul, terminus of the famous Orient Express and melting pot between East and West, always has been a popular destination for train travellers. However, in the recent years lengthly construction works in Turkey and Bulgaria have led to the demise of train travel to the booming city on the Bosporus. The old Sirkeci terminus in the city centre has been closed to make way for the new Marmaray suburban line. Consequently, trains from Thracia and Bulgaria can now only reach Halkali on the outskirts of the city. Still, the night trains from Bucharest and Sofia continue to operate, although travelling from Europe to Turkey by train currently is not as convenient as we would like it to be.

The night trains to Istanbul

In principle, there are two direct night trains to Istanbul: The "Balkan Express" starts its journey in Sofia. Just a few years ago this train even started back in Belgrade. With the reintroduction of the day train from Belgrade to Sofia you now again have a direct connection in Sofia to Istanbul. From Sofia the Balkan Express runs via Plovdiv to Dimitrovgrad. There, it is joined with the Bosfor from Bucharest. The "Bosfor" starts in Bucharest and runs via Ruse and Veliko Tarnovo to Dimitrovgrad. From Dimitovgrad both trains run together to the border towns of Svilengrad and Kapikule before continuing via Edirne and Cerkezköy to Istanbul. However, due to construction works and decreasing demand these trains are not anymore the grand night trains they used to be. Below I described how the services from Sofia and Bucharest to Istanbul look like today. 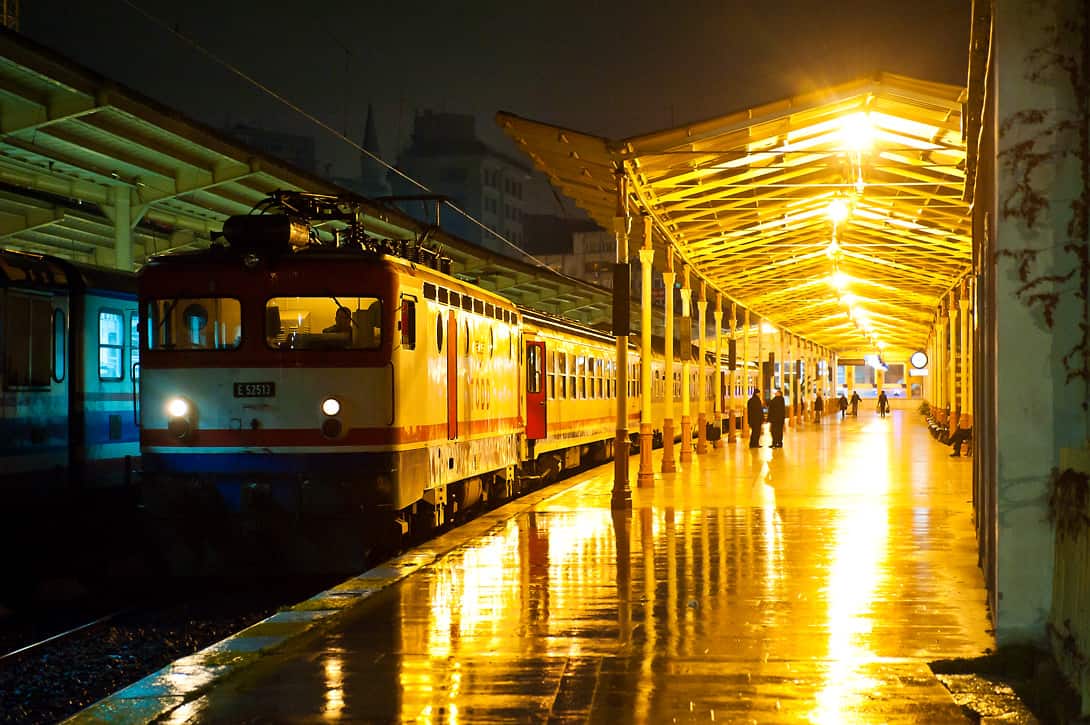 Construction works on the railway line from Kapikule to Halkali are reportedly finished and since 2016 a daytime train between the two cities operates. From February 21 2017 the night trains again run to/from Halkali station. This means that you do not longer have to travel with replacement buses between Kapikule and Halkali.

Since March 12, 2019, there is once again a train service between Halkali and the city centre of Istanbul. From Halkali, the Marmaray suburban trains run every 15 minutes to the city centre and through the Bosporus tunnel to Gebze on the Asian side of Istanbul. Trains take about half an hour from Halkali to Sirkeci station in the old town. There are also two high speed trains running between Halkali and Ankara; the remainder of the high speed services from Istanbul will start at Söğütlüçeşme in the Asian part of Istanbul. You can get there with the Marmaray suburban trains.

From Sofia to Istanbul

The Balkan Express leaves Sofia in the evening and runs via Plovdiv and Dimitrovgrad to the border towns of Svilengrad and Kapikule. Then the train continues via Edirne to Halkali station in the suburbs of Istanbul. Since February 2017 the train conveys couchette and sleeper cars again and consists of one BDZ (Bulgarian Railways) couchette car with 6-bed and 4-bed couchettes available, one TCDD (Turkish Railways) couchette car (4-bed couchettes available) and a TCDD sleeping car (2-bed and 1-bed compartments available). In Sofia, the train has connection from the day train from Belgrade. As long as the train from Belgrade is on time, this would allow to make the trip from Belgrade to Istanbul in about 24 hours.

From Bucharest to Istanbul

As of February 2017, the Bosfor night train doesn't run at all. Instead, you have to use a number of different trains and change several times. Changes are required at Ruse, Gorna Orjahovtisa and Dimitrovgrad. Naturally, all these trains consist of regular seated carriages only. In Dimitrovgrad you have to change to the night train from Sofia to Istanbul. Read more about this train in the paragraph above. You can see the detailed schedules at the links below.

During summer 2017 (June to September) there will be through couchette and sleeper coaches running from Bucharest to Istanbul again. These coaches will be attached to the Belgrade - Sofia - Istanbul train at Dimitrovgrad. As soon as we get confirmation the schedules will be updated accordingly. UPDATE: According to information from July 2017 the CFR sleeping car from Bucharest to Istanbul is not running anymore (July 2017).

In 2019, the situation remains the same as in previous years: there are direct couchette and sleeping cars all year round between Sofia and Halkali. On the route between Bucharest and Halkali there will be a direct couchette car during summer from June 9 to October 7, 2019. During the remainder of the year you will have to change trains and only 2nd class seats are available.

Tickets are cheapest when bought locally at train stations. Online tickets are not available. The prices for Sofia - Halkali are as follows:

A single ticket from Bucharest to Istanbul it is 38,80€ in 2nd class. Currently you will travel to Dimitrovgrad in regular 2nd class coaches, then change to the night train from Sofia to Istanbul, for which you need a couchette or sleeper reservation. During summer season when direct couchette and sleeper carriages run from Bucharest to Halkali, prices start from 9,40€ for a couchette and from 22€ for a sleeper.

Rail passes (Interrail, Eurail, Balkan Flexi Pass) are valid. You just have to buy an additional reservation for a couchette or sleeper.

Citizens of certain countries need a visa to entry Turkey. Please check on the website of your foreign ministry before leaving for your trip. Visa are available online via the visa application system of the Turkish Ministry of Foreign Affairs or at Turkish Consulates. I dont know if the possibility to get a visa locally at Kapikule station still exists, but I doubt it.

We are always very happy about first-hand reports from travellers. If you have been travelling this route recently, feel free to add a comment below or write in the railcc forum.