From Bodø to Trondheim by Train

Crossing the Arctic Circle in Norway by Train

The train connection from Trondheim via Fauske to Bodø is a scenic train route. There is one night train and one connection over the day. The journey takes about ten hours. With the Minipris of VY you can travel very cheap from 25 euros. Also with Interrail: a seat reservation is possible and recommended, but not mandatory. Trondheim offers a direct connection to Oslo. From Fauske you will continue by bus to Narvik and on by train to Northern Sweden. And from Bodø you can take the ferry directly to Lofoten. All the details now here in my travel blog. For the fast bones who like to book directly, here the links to the Minipris sver fare tickets of VY: either buy on ACPRail or on VY. 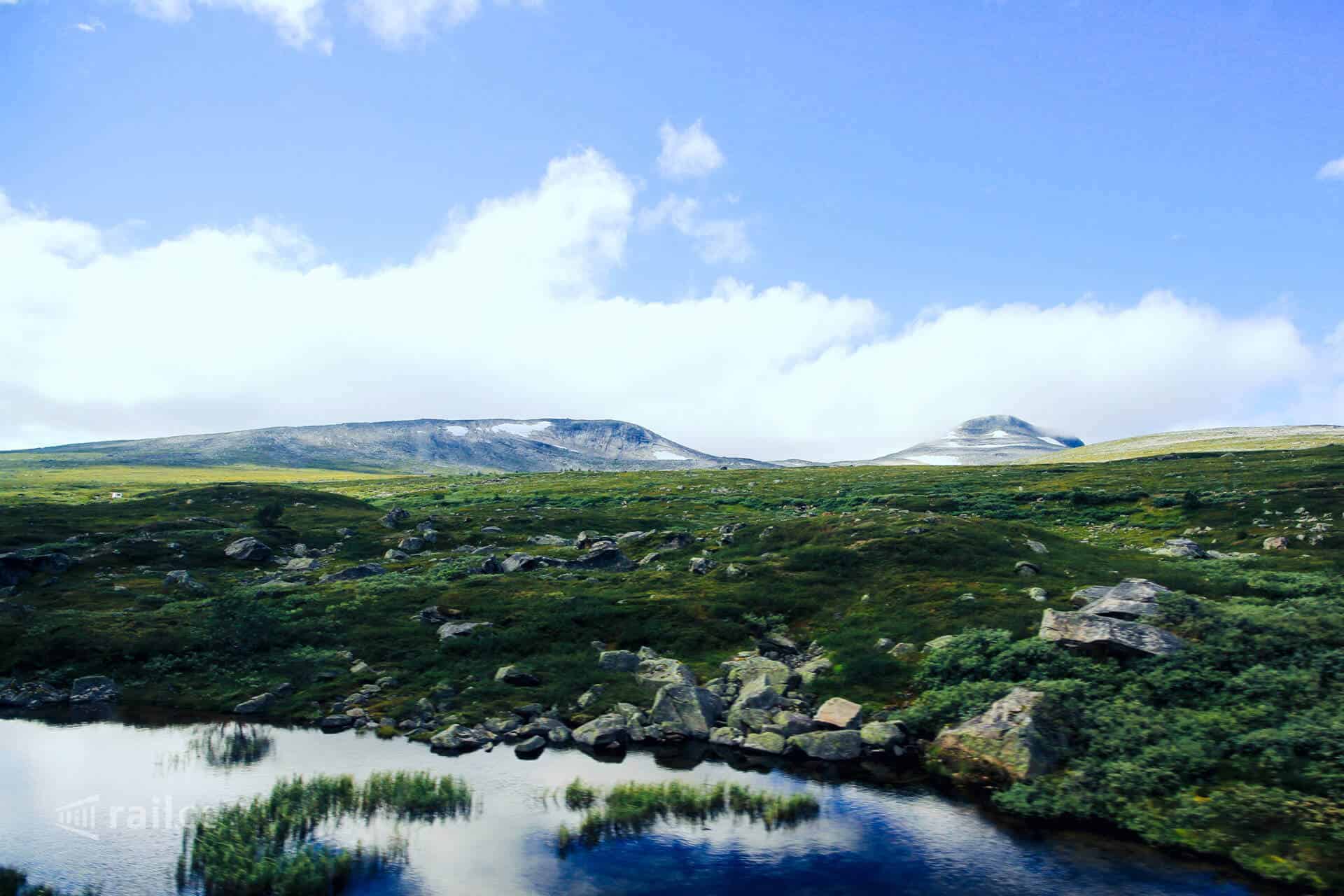 Pure nature on the railway line from Trondheim to Bodø.

The train connection from Bodø via Fauske to Trondheim

On the route from Bodo via Fauske to Trondheim there is one train with departure in the morning and one connection overnight. The journey time for the 729-kilometer route is about ten hours. Personally, I think the route is worth seeing and recommend the trip over the day. Whereby it is not really dark in the summer and you also see a lot travelling by night train. The Norwegian saver fare tickets are called "VY Minipris". If you book in time, you will get these saver fare tickets from Euro 25. They are available online (you receive them as email) on the websites of ACPRail and VY. 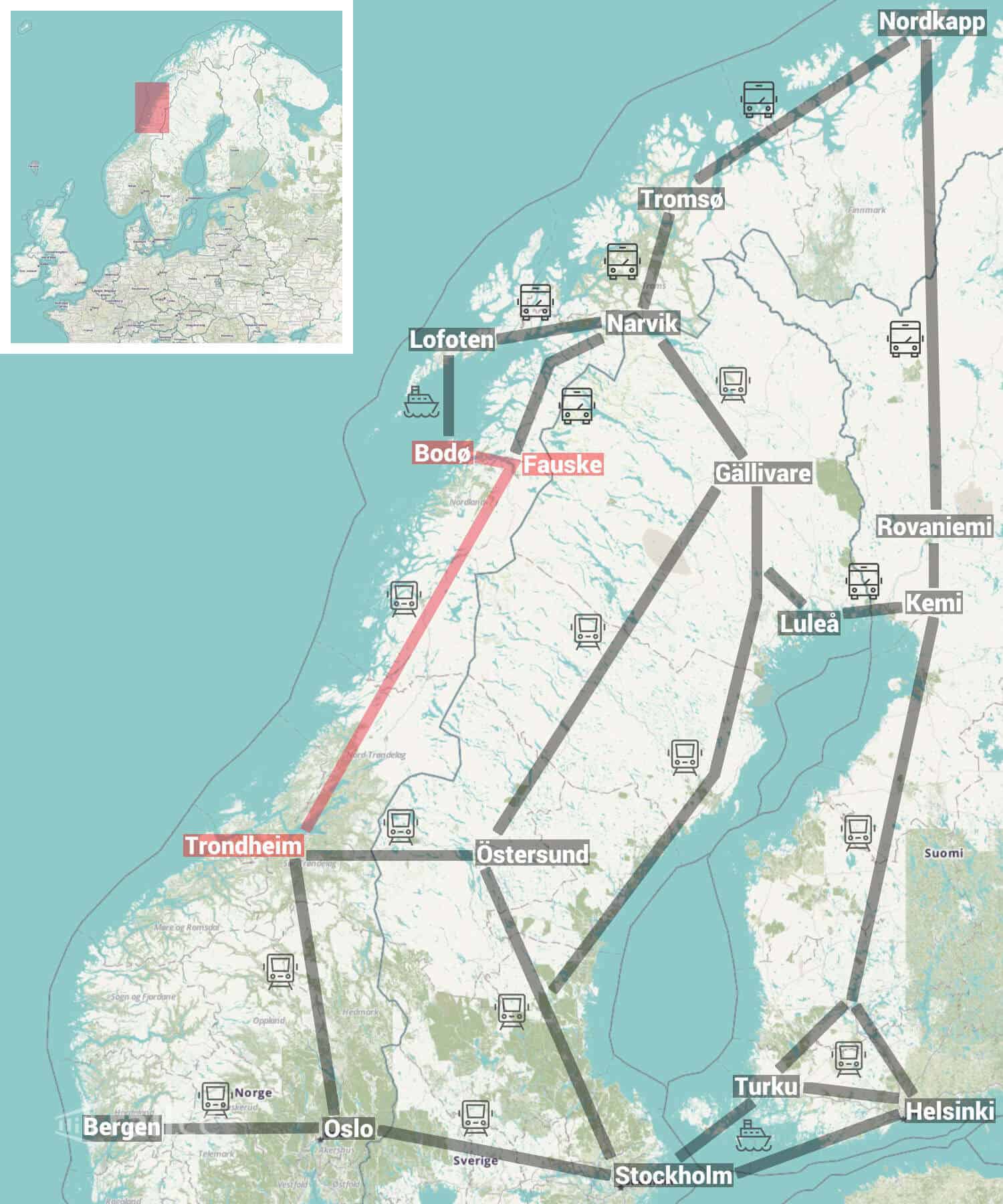 The train map of Norway with the route from Trondheim via Fauske to Bodø.

This journey is as well interesting for further connections. From Trondheim you can directly continue to Oslo. From Fauske you have connection with the bus to Narvik. There is no train connection in northern Norway between Fauske and Narvik, the bus is the only option. From Narvik you can continue to Nordkapp or Lofoten (each by bus). Or to northern Sweden by train. From Bodø you have access by ferry to Lofoten. Details to all these connections you find below.

The train schedules from Bodø to Trondheim


The departure in Bodø

The train was ready at the platform half an hour before departure. The train station of Bodø is very relaxed, as there is only one direction the trains can go. There is a ticket office in the building, but I already bought my ticket online at a cheap price. From the railway station you can easily reach the bus station and the ferry terminals on foot. Here is the overview.

After one hour's drive, my train reached Fauske. Once again, a few travellers entered the train. Either coming from Fauske itself or by bus from Narvik. The bus was still at the bus terminal, right next to the station of Fauske. 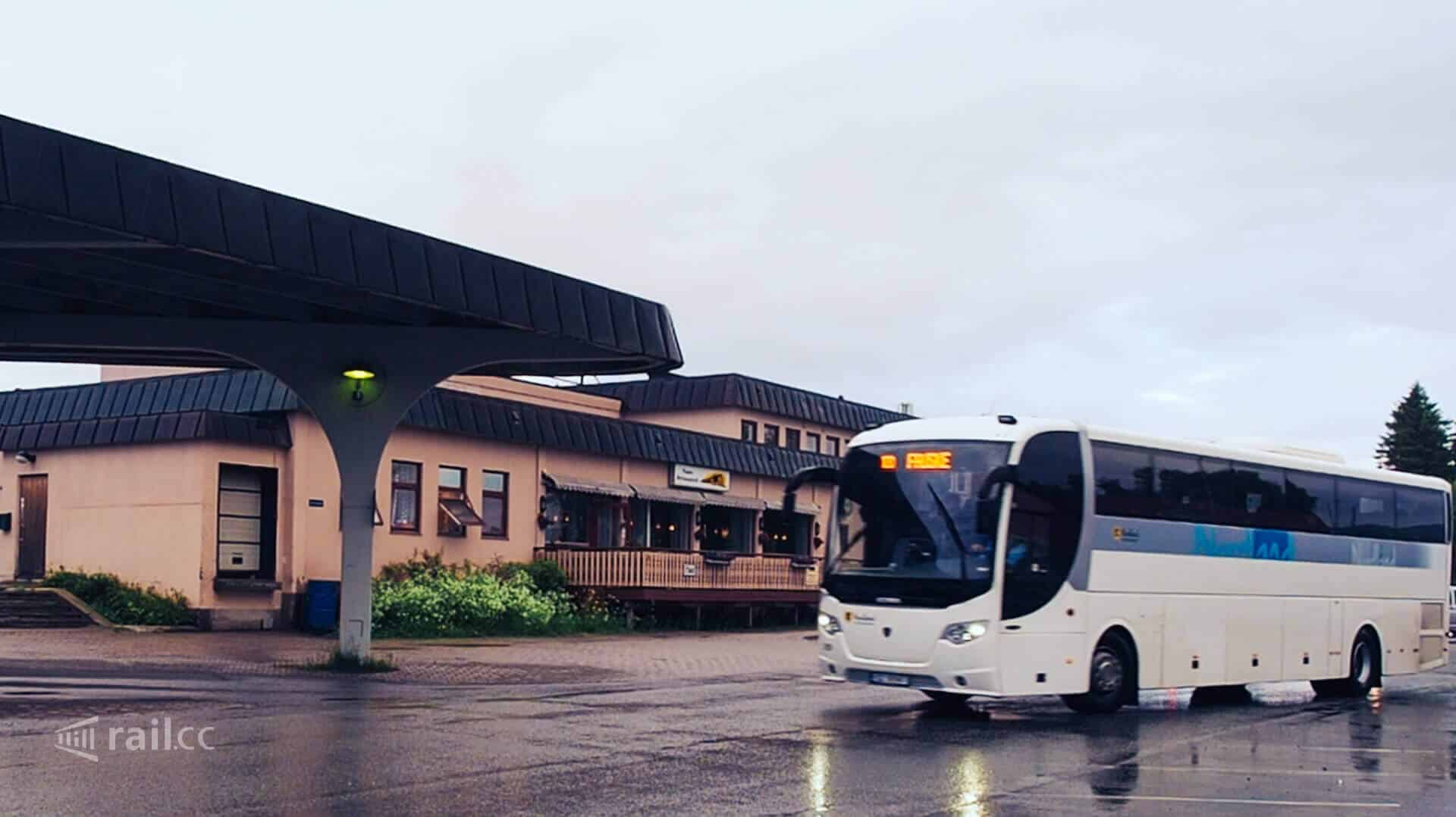 The bus from Narvik at Fauske train station.

The train journey from Bodø to Trondheim

The train journey from Bodø to Trondheim slows you down. You travel through beautiful nature and you can look relaxed all the time out the window. In the train there is a restaurant car called "VY Kafé". A sandwich costs around 7 euros. Hot meals are more expensive, but by Norwegian standards still to an affordable price. The menu can be found here. So I just did nothing than relaxing. It should be a quiet journey. Until it suddenly came to a loud bang. Unfortunately a special meeting. What happened? More below. First the beautiful ride in pictures ...


Find the best fare for your journey in Norway

In the train station of Trondheim you have a direct connection to the overnight train to Oslo, arriving by day train from Bodø. The walk to the city is not really far. I booked a hotel right next to the train station, which was just comfortable.

By night train from Bodø to Trondheim

In the night train, there are generally two categories in Norway: seat or sleeping car. The seats are subdivided into "normal standard seats" or "VY Komfort Natt". You get the following:
- normal seats corresponds to a seat car, which also runs during the day. Two seats next to each other. There is a pillow, a light blanket, a sleep mask and earplugs for every traveller in a bag. All this you can take home after your journey, otherwise it will be donated by VY.
- "VY Komfort Natt" is also the seat car, but you have two seats next to each other for yourself, means you have more space. In addition, there is an 80 NOK voucher for the "VY Kafé" (restaurant car) and a coffee, tea or hot chocolate for free. Surcharge to the standard seats is 220 NOK.
- The sleeper compartment "VY Sove" costs NOK 930 per compartment. It does not matter if you travel in it alone or by two persons. The beds are 75 cm wide. There is a sink in the compartment. The toilets are in the corridor. You pick up your access card to your sleeper compartment (like a hotel room) in the "VY Kafé" (restaurant car). This can already be done at the following times: in Trondheim from 23:05, departure is at 23:40. In Bodø from 20:50, departure is at 21:10.


From Bodø to Lofoten by ferry

From Bodø you can take the ferry directly to the Lofoten islands. More information about the ferry from Bodø to Svolvær can be found here, including online booking information. The one-way ticket costs around Euro 65 for adults. From Svolvær you can take a bus around the Lofoten and then on to Narvik.
Very worth reading is the blog of Micha.

To Narvik from Fauske by bus

Since Fauske and Bodø are the end of the railway line in the north of Norway (coming from Oslo - see map above), you can only continue by bus. The bus closes the gap between Fauske and Narvik. In Narvik you have a train connection to the north Sweden to Abisko, Kiruna and Gällivare (here Inlandsbanan leaves). Or directly with the night train to Stockholm.

How to continue in the north of Norway

You have to decide if you want to take the ferry from Bodø to Lofoten and then take a bus to Narvik. Or choose the more direct route: by bus from Fauske to Narvik. From Narvik there is the connection by train to Sweden. Or by bus to Nordkapp. That's the only way you can make a round trip through Scandinavia by train without travelling the same way back in Norway.

From Trondheim to Oslo by train

From Trondheim you have a train connection to the south of Norway over day and the night train. Also day train connections to Östersund in Sweden (about 4 hours). Anyway, I recommend an overnight stay in Trondheim. I really enjoyed the city: relaxed and fresh.

If you want to do the trip from Bodø to Oslo in one, in my opinion the combination of "day train Bodø to Trondheim" and "night train Trondheim to Oslo" is the best choice.


The specials of this route

Also, the train can definitely "hit" an elk. That's what happened in my case. Three hours before Trondheim it happened. The train did an emergency stop. And I heard it rumble under the wagon. The train was standing. An excited conductor ran through the wagon. And five minutes later came the announcement: "The train driver confirmed that we hit a massive elk." Apparently, several power lines were damaged at the roof of the wagon. After a short sighting by the train driver and the train staff, the train continued slowly to the next station. There all passengers who had to catch the night train from Trondheim to Oslo got on a bus. I stayed on the train, which continued slowly again - and it was quite romantic, the train completely without lighting and electricity inside. The windowless toilet could e.g. be visited only with the flashlight of the conductor. Finally, my train arrived in Trondheim one hour delayed - but that's just nature.

Where did I buy my train tickets

I bought my saver fare ticket "VY Minipris" on the website of ACPRail as e-ticket (was send to me by email). Using this link you directly support the free information aur rail.cc. Of course you can buy your ticket as well on the website of VY - here without the support of our free content.

The "VY Minipris" starts from about 25 euros. Really cheap for such a long journey through scenic nature. Of course you have to book early.


Get your e-ticket on ACPRail


By Interrail from Bodø to Trondheim

With Interrail you can travel for free from Bodø to Trondheim without a seat reservation. However, I recommend you the 50 NOK for a reservation. It's a long way and sometimes there are tour groups that fill the train (I experienced it myself). Otherwise just ask friendly the conductor who always has a list with seats which are still free. For the night train the reservation is definitely useful.
Information about the night train with Interrail and the reservation costs can be found via the following links.

Bodø to Trondheim RT476
Trondheim to Bodø RT475
Reservations can be made online at ACPRail (will be emailed to you) or in Norway at a train station.


Where did I sleep

I never stayed overnight in Bodø itself. There I always continued on each trip directly by ferry to Lofoten. Also in Fauske I have always used the bus with connection to Narvik. Once a campsite, but too far to walk from Fauske station. In general, you can check the usual booking sites like booking.com and Hostelworld, to find something nice. If you use these partner links, you also support all the free content on rail.cc - thank you! ?

In Trondheim I stayed at the Hotel Brattøra directly at the train station. At that time for the saving price for around 80 euros. Good luck I had, as hotels are not that cheap in Scandinavia. Therefore my recommendation: use the two booking websites mentioned above.


Find a cheap accommodation in Norway


My personal conclusion about the trip from Bodø to Trondheim

It is a really scenic rail route, where you can forget the time and enjoy ten hours of great, relaxing nature. Personally, I prefer to travel this route over the day. Have something to eat and drink with you, even if the on-board restaurant is affordable. If you get a "VY Minipris" discount price, then the journey is very cheap.